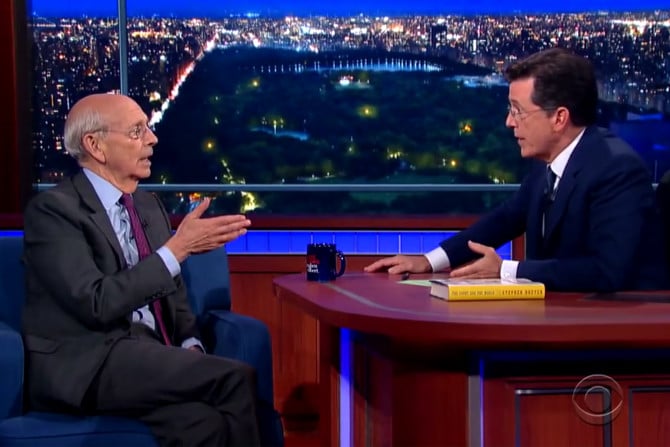 Supreme Court Justice Stephen Breyer took a break from the courtroom to promote his new book on “The Late Show with Stephen Colbert”.

The book was only briefly mentioned but Colbert took the opportunity to gain insight regarding various court-related issues, including why cameras are still banned in the highest federal court in the United States.

“Why can’t we watch you if the Supreme Court repeatedly rules that we can be watched by the government?” Colbert asked the justice.

Obviously used to being asked that very same question, justice Breyer was quick to defend and explain the ban, though he admitted it could be a “fabulous educational process”.

Between asking if there’s a hazing process and a spanking machine in the Supreme Court to how one works everyday with a group of people who constantly disagree with you, Colbert brought up the Supreme Court’s ban on cameras.

Giving the justice a good reason to lift the ban he jokingly added: “If you had cameras in the courtroom, you could just put your book on the edge of your desk and you wouldn’t have to be here right now shaking your lawmaker”.

Jokes aside, the justice explain that in his line of work he makes decisions for 315 million people who are not there in person, adding that having cameras in the courtroom will lead to a distorted view of what’s going on in the case.

Explaining his concern that viewers would not see the whole picture from recordings of the oral arguments, the justice explained that they make up for only “about 5% of the basis for deciding a case. It’s almost all in writing”.

He added that they don’t know what the reaction among “lawyers and others” would be if cameras were allowed during the process of oral arguments.

According to The Hill, most of the justices are against reversing this policy, fearing it could change the courtroom dynamics and that video clips could be misunderstood or taken out of context.

It is also mentioned that several bills that would allow cameras in all open sessions have been introduced over the years, but without success.

You can watch the full interview in the video below. Jump to 3:12 to get straight to the camera ban segment.

Supreme Court of the US is looking for full-time photographer