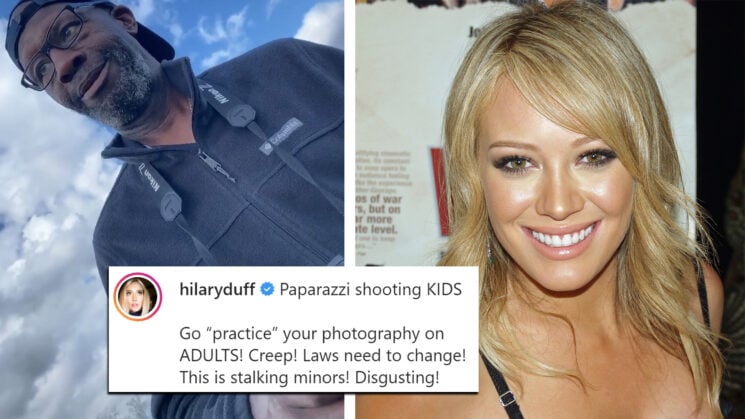 In 2020, actress and singer Hilary Duff publicly called out a photographer who was taking photos at her kid’s soccer game. She filmed him with his phone, posted the video on her Instagram, and publicly called him “a creep.” She later discussed the incident on a talk show, and the photographer decided to sue her and the show host for defamation.

However, it appears that being publicly called out isn’t enough to win a slander lawsuit. On Monday, a judge dismissed both lawsuits that the photographer had filed.

In case you missed the story, here’s a brief recap. As I mentioned, the incident took place in 2020 when Duff spotted photographer Darryl Wilkins while he was taking photos at her child’s soccer game. She approached him and confronted him, asking why he was taking photos. Wilkins said that he was practicing his photography skills, arguing that it was legal, and offering to show his ID.

However, Duff kept insisting that he stopped taking photos because “it made her uncomfortable.” She later posted the video that’s still on her Instagram, calling Wilkins “a creep.”

“Go “practice” your photography on ADULTS! Creep! Laws need to change! This is stalking minors! Disgusting!”

Since Duff’s video went viral and the news got all over the Internet, it reached a talk show host Wendy Williams. She played the video on her talk show, The Wendy Williams Show, and briefly discussed it with Duff, offering her own opinion as well:

“Creepy to me. Sir, if you’re practicing photography, why wouldn’t you go into a park and take pictures of birds and butterflies?”

After this, Wilkins sued Fox Broadcasting and Talk WW Production Inc., the production company behind The Wendy Williams Show. He claimed that Duff and Williams “used innuendo and their celebrity platforms in a way that damaged his reputation, as PetaPixel reports, and he sued them for libel and slander.

Wilkins’ attorney, Fred Hanassab, Kalra asked for a short delay in finalizing the ruling, but the judge denied it. “Hanassab said he had been out of town caring for an ill relative, that he only recently found out about Monday’s proceeding and that the attorney who had been working on the case left the firm,” Spectrum News writes. However, the judge found his explanation “completely lacking.” He said that the lawyer “had been personally served by the defense motion, that he had months to decide what to do and that he could have communicated with Weiner.” In addition, he could have been “anywhere on the planet and respond electronically.”

In Wilkins lawsuit, he noted that comments made on the talk show suggested he was a child predator. However, the judge disagreed:

“However, when looking at the transcript of the judicially noticed video, the only comment made on ‘The Wendy Williams Show’ about the plaintiff that would be unkind is that the plaintiff’s actions were ‘creepy.’ As such, the plaintiff has failed to allege sufficient facts to constitute libel or slander.”

“Although plaintiff’s complaint alleges Duff called him a ‘child predator,’ there is no such statement made by anyone in the ‘Wendy’ segment,” the judge writes on. He agreed that Williams was “expressing an opinion” of Duff’s video, and it just wasn’t enough for the lawsuit:

“As the defendants’ motion indicates, the only statement made by Williams is that (Wilkins’) actions were ‘creepy.’ Whether or not someone’s actions are ‘creepy’ are opinions.”

I wonder if Wilkins would have won the lawsuit if he only sued Duff for publicly humiliating him in her Instagram video, rather than suing her and Williams over the talk show. But I can only wonder. However, as PetaPixel notes, this is only a partial victory for both of them. Fox Broadcasting Co. and Talk WW Production Inc. attorney Joel Weiner reportedly said he had authority to represent Williams as well. According to Spectrum News, he asked that for the part of the case against Williams to be dismissed as well. However, the judge said that this move would be “premature,” considering that there’s a hearing scheduled on 7 September.

Photographer Loses Copyright Suit Against Mapmaker Because of Licensing Technicality

« Watch Into the Mountains, a breathtaking timelapse ‘love letter’ to the mountains of Greece
Fake tech support scammers are targeting Canon printer owners for hundreds or thousands of dollars »