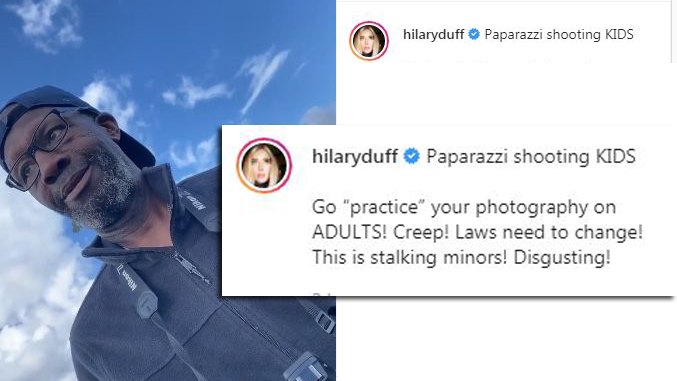 In February 2020, actress and singer Hilary Duff publicly called out on photographer Darryl Wilkins calling him “a creep.” Now the photographer is reportedly suing her for defamation, along with talk show host Wendy Williams who sided with Duff on her talk show.

If you missed the story, here’s a short overview. Hilary Duff approached Wilkins who was taking photos at her kid’s soccer game. She was filming the encounter with her phone and asked the photographer who he was with, to which he responded: “I’m here with me.”

Duff asked why he was taking photos, and he explained that he was practicing his photography skills. He argued that it was legal, and even offered to show his ID. But it wasn’t enough for Duff, who kept insisting that he stopped taking photos because “it made her uncomfortable.”

After the encounter, Duff shared an IGTV video with her then 14.6 million followers, writing this caption:

Go ‘practice’ your photography on ADULTS! Creep! Laws need to change! This is stalking minors! Disgusting!”

Duff’s video went viral, and it’s still on her Instagram at the time of writing this. It reached talk show host Wendy Williams who played it in her talk show, The Wendy Williams Show. But she didn’t only play it, she offered her opinion, as PetaPixel reports:

“Creepy to me. Sir, if you’re practicing photography, why wouldn’t you go into a park and take pictures of birds and butterflies?”

The clip from the talk show was on YouTube, but it has been made private in the meantime. But I’d like to tell Ms. Williams that not all of us take photos of birds and butterflies when practicing photography. Heck, I don’t even have appropriate lenses for neither!

Anyways, after both Duff and Williams expressed their opinions publicly and without any class or taste, Wilkins reportedly decided to sue. The Blast claims that they have obtained the court documents and that Wilkins is suing Duff and Williams for libel and slander. He reportedly insists that he was shooting in a public park to test out his new camera, which is more or less what he told Duff in the video.

At the moment there aren’t many details about the lawsuit. But as soon as we know more, we’ll update the article or share the news in a separate post. And if I may add a very personal opinion here: I hope that Wilkins will win.