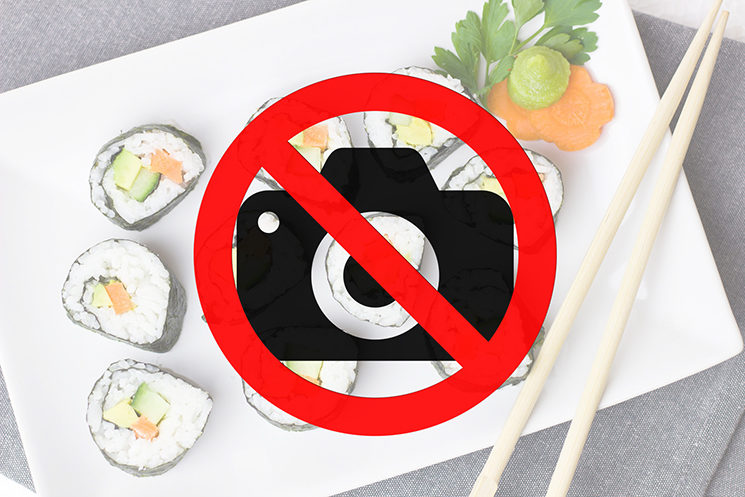 While some restaurants want to help you take better photos of food, others are banning photography completely. Japanese sushi chain Sushiro has banned photography from all its restaurants, thanks to a single GoPro camera and YouTuber TkyoSam.

It started when TkyoSam placed a GoPro on a conveyor belt in one of Sushiro’s restaurants. He posted the video on his YouTube channel and it reportedly went viral. According to Resource Magazine, this angered Sushiro’s management, so they decided to ban photography from all their restaurants.

The video TkyoSam posted has been removed, but Resource Magazine describes it as a simple view of a camera from a conveyor belt, which “has been done many times before.” The people in the video reportedly had different opinions about being filmed. Some waved and smiled, others flipped a bird. Apparently, the employees hadn’t noticed the camera straight away. When they did, they placed it on the side and later returned it to the owner.

As Resource Magazine writes, at first no one seemed upset about the GoPro on the conveyor belt. But after the video received tons of views on YouTube, the restaurant management decided to ban photography. They say that this is “not permissible from the viewpoint of hygiene management,” but also point out that it hinders the privacy of the visitors.

TkyoSam is an American living in Japan. According to his About section on YouTube, he wants to help people move to Japan. So, he probably had a good intention when placing the camera on the conveyor belt, but I must agree it wasn’t the most sanitary thing to do. But banning photography completely from all restaurants seems a little over the top. What do you think?

How Instagram Is Changing The Way Restaurants Dish Out Your Food