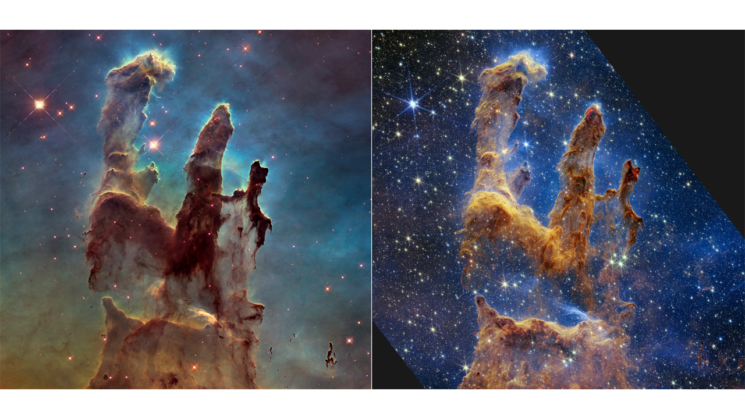 NASA’s James Webb telescope has given us an updated image of the spectacular Pillars of Creation. Set within the vast Eagle Nebula, the Pillars were first captured by the Hubble telescope in 1995.

In the images above the Hubble image is on the left while the brand-new James Webb image is on the right. At first glance, you can see how much more detailed the Webb capture is. What looks like swathes of artistic colour in the Hubble telescope transform into millions of distant stars in Webb’s.

The Pillars of Creation are an area where new stars are forming within dense clouds of gas and dust. “The three-dimensional pillars look like majestic rock formations, but are far more permeable,” says NASA. These columns are made up of cool interstellar gas and dust that appear at times, semi-transparent in near-infrared light.

The image was captured using Webb’s Near-Infrared Camera (NIRCam). The newly formed stars are visible in the image as red orbs. When knots with sufficient mass form within the pillars of gas and dust, they begin to collapse under their own gravity, slowly heat up, and eventually form new stars.

Along the edges of the pillars are wavy lines that look like lava. These are ejections from stars that are still forming. Young stars periodically shoot out supersonic jets that can interact within clouds of material, like these thick pillars of gas and dust. This sometimes also results in bow shocks, which can form wavy patterns like a boat does as it moves through water. These young stars are estimated to be only a few hundred thousand years old and will continue to form for millions of years.

Webb’s new view of the Pillars of Creation will help researchers revamp their models of star formation by identifying far more precise counts of newly formed stars, along with the quantities of gas and dust in the region. Over time, they will begin to build a clearer understanding of how stars form and burst out of these dusty clouds over millions of years.

Here is the full view of the image. I think you’ll agree that it’s a spectacular update of Hubble’s original. 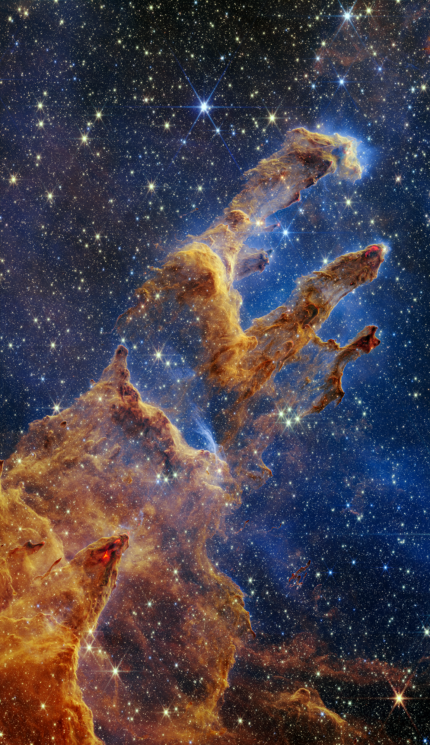