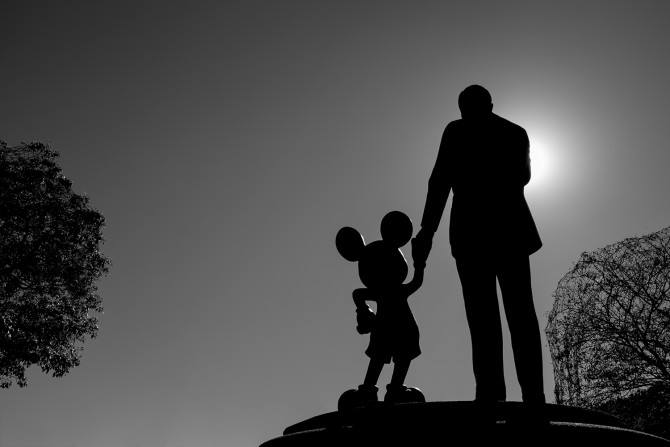 I’ve always had a lot of fun challenging myself with creative and/or technical limitations. Like giving myself a photo assignment to spend the day or even an entire vacation with a certain camera/lens combination and a limited shooting style, like to shoot only macro or only black and white, etc. It usually makes me work harder to get the shots, but more importantly, I often come home with photos I probably wouldn’t have if I had taken my best equipment and approached shooting in my usual way. And who knows, what if through an exercise of self-imposed creative or technical limitations, I accidentally “stumble on a style”?! Which is exactly what happened to me and why I’m suggesting you try it yourself! 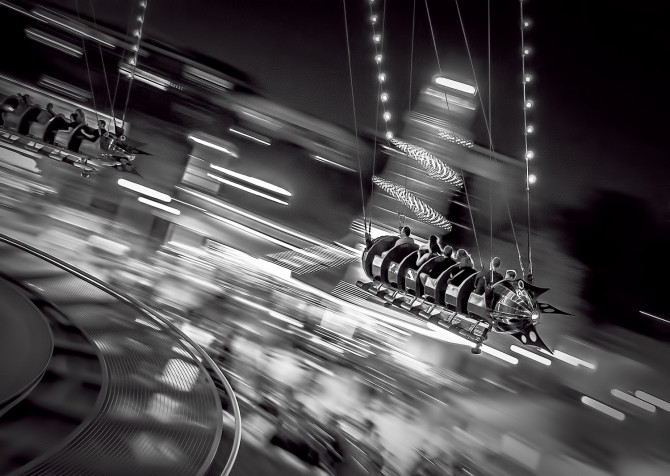 One of those instances was when I was getting ready to go to Disneyland for the evening.. Leaving the DSLR at home, I decided that I would shoot with my Fuji X100S. Now I doubt anyone who has shot with an X100S has felt technically handicapped by it.. It’s a wonderful camera. The creative challenge was just to get a varied looks with a fixed lens (35mm equivalent) while making a vibrant, colorful theme park look interesting in black and white. And the technical part of the challenge was to shoot hand held at night with no flash and balance the wide dynamic range of bright lights with the night and the low light inside Disneyland’s rides. I shot RAW + JPG with the camera set to BW+G picture mode (simulating a black and white look with a green filter for contrast). I thought this was important so while shooting, I could seen the scenes in gray scale vs looking through the camera in color. 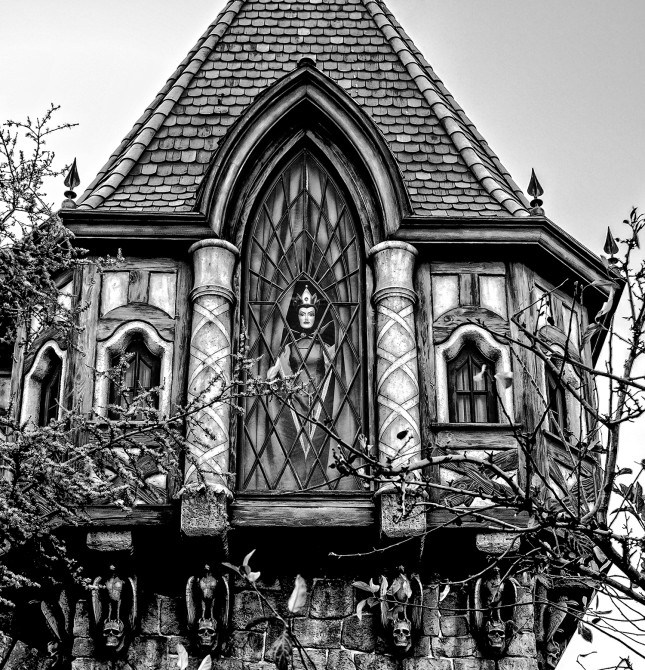 When I got back from my first day of shooting, I realized I had shots that looked nothing like my usual work, and I liked that! I really had to move my feet and work for my compositions and it was honing my hand held, low light techniques at the same time. In the other areas of my photography, I like to mix my lighting and genres up, so I was never sure I ever I had “a signature look”. But for the first time, with these creative and technical parameters, I felt I was deliberately shooing for an identifiable look. Did a self-limiting, creative exercise spawn a new coherent series of shots that looked like “a style”? I was going to explore this more. 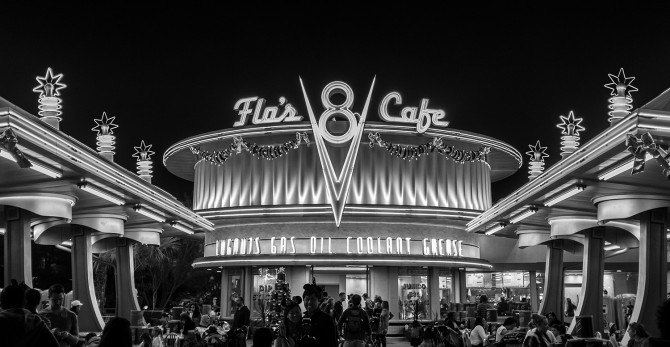 Being an annual pass holder to Disneyland, I was able to go back whenever I had the chance to shoot some more. I wound up branching out a bit and bringing my little (discontinued) Fuji X20 to do some macro work and I also opted to do some shots during the daytime because hey, I’m not going to forfeit a cool shot just because the last few times I only shot at night.  I’ve also wound up using a Sony A7II and A6000 a couple times, but for the record, I LOVE the look of Fuji files as well as the feel and workflow of their cameras. I think for this black and white look, I’ve chosen to shoot with the Fuji’s about 98% of the time. 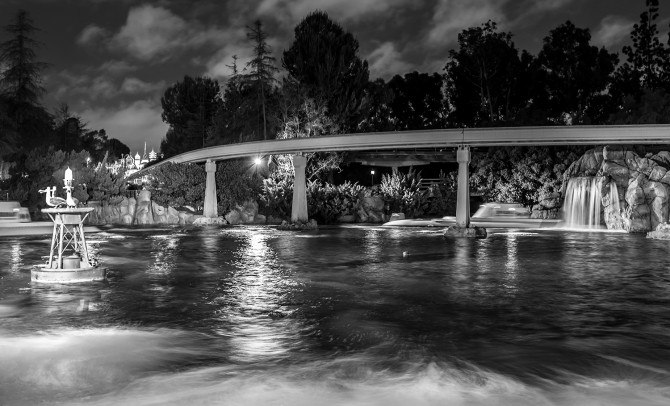 As you would expect, while shooting at night I really tried to stabilize my camera whenever possible. Either putting it up against a wall or resting my arms on something. Another a big help is putting the camera on a two second delay so my finger doesn’t move the camera in the slightest by pushing the shutter. I’ll even extend my arms, pulling the camera away from me, making the camera strap stiff around the back of my neck to stabilize it (I’m sure that looks stupid, but anything for a shot!) Of course the timer method only works if I’m not trying to capture a quick passing moment. 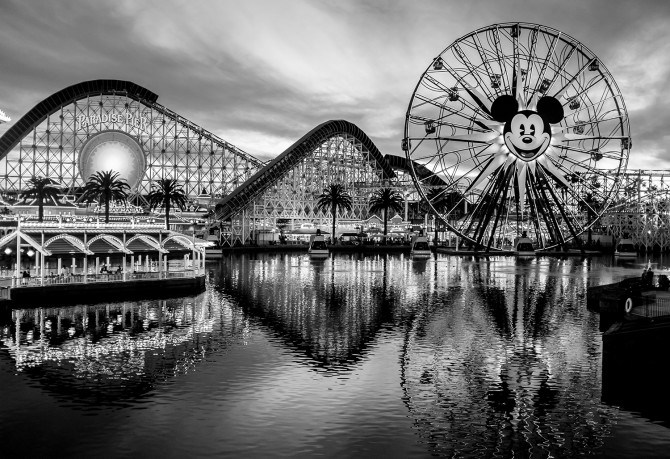 More than anything, I think being in control of the camera’s settings for any given situation is key. For me, being able to quickly change up metering modes, shutter speeds, focus areas and optimizing ISOs, etc. to get the right exposure and the look I want is important. In a vibrant, fast paced environment like Disneyland those variables can change constantly, so I am always adjusting camera settings. Especially at night, in these hight contrast situations, leaving the camera in evaluative metering with a fixed center focus, will probably not get you predictable results. I’m a big advocate of spot metering and I’m alway moving my focus point around. I usually expose for highlights and often use exposure lock, then recompose because once those highlights are blown out, it can be really difficult to bring them back, but you can always bring up some shadow detail later. 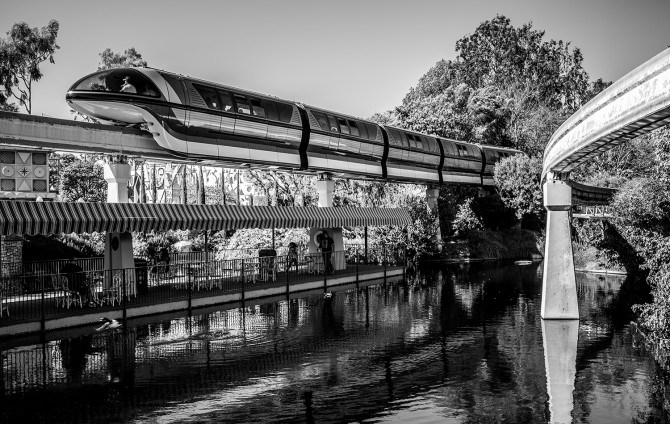 When it came to post processing, I of course used the RAW files, but I didn’t use any of my fancy black and white  plug-ins, I simply did my most of my processing in Adobe Camera RAW. I’ve had Lightroom since V1 but I’ve rarely used it. I know, old dog/new tricks… I’ll get to it someday I’m sure. Nevertheless, I found almost everything I needed in ACR to get the look l liked. 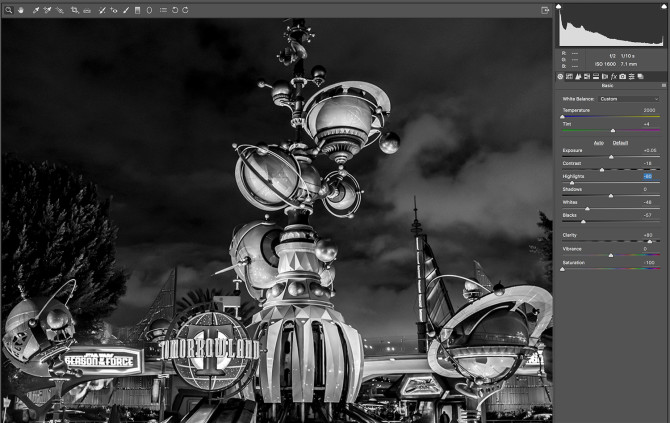 Most RAW processors have these same controls so this should make sense no matter what program you’re using. I’d start out with almost always pulling the temperature slider all the way left to full cool, pull back on the highlights if they needed controlling, season to taste with the shadows, whites and blacks, pull saturation all the way down and crank up the clarity and finally add some noise reduction with the luminance slider. Sometimes I’d add a little vignetting, and that’s pretty much it. 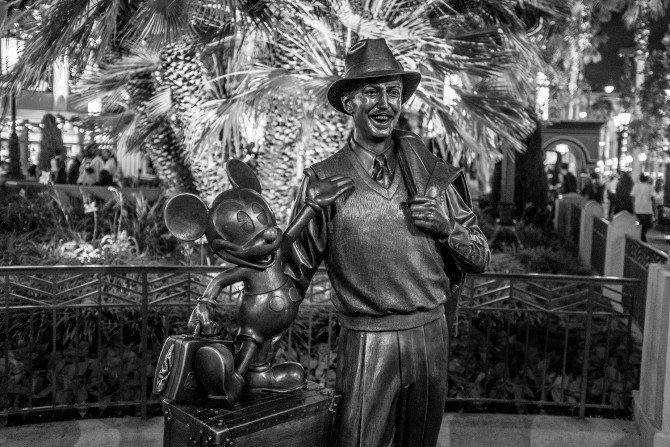 I’ve had a lot of fun with this and I’ve continued to use these techniques whenever I do black and white street photography. I really urge you to take some time to intentionally shoot differently than you might normally shoot. Choose any variables that sounds interesting to you see what you come up with. They may not all be winners (I’ve tried some combinations that haven’t yielded anything I like) but shooting digital is free, so enjoy the creative road less traveled to discover some new, pleasant surprises in your photography. 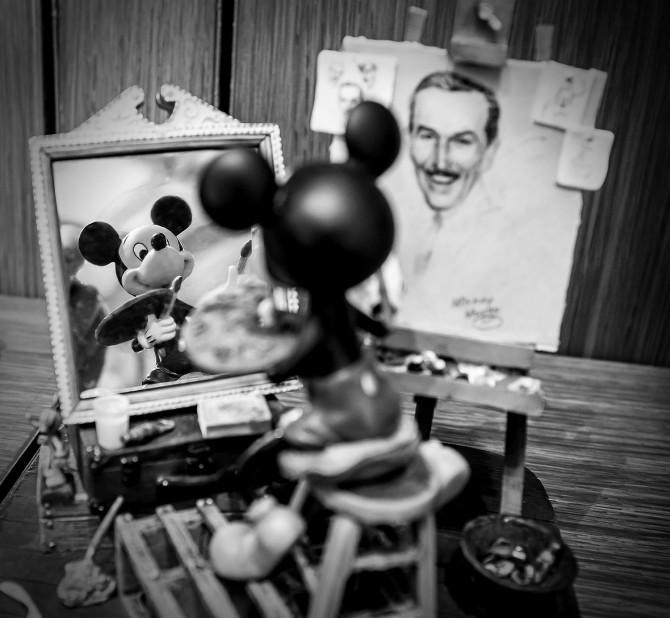 Why Black & White is the goto look for street photographers