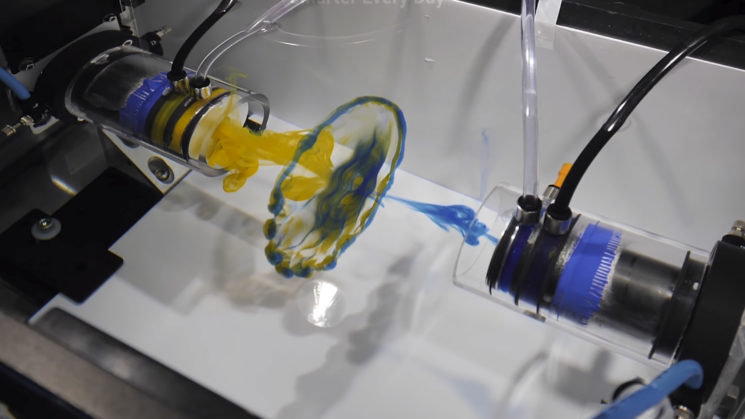 Sometimes, you see something or get an idea and you just don’t rest until you get it. That’s what happened to Destin Sandlin at Smarter Every Day when he saw an old video of a vortex colliding perfectly with another. This may not sound that cool, but he saw something very unusual. Something he spent a long time researching and couldn’t find answers for.

He knew that the only way he could start to find answers was to recreate the experiment for himself. To produce two vortices that aligned and collided with each other perfectly. It’s taken him the last four years to finally make it happen, he filmed the whole thing in slow motion using a Phantom, and it’s a thing of beauty.

Five years ago, Destin was sent a link to a video of two coloured vortex rings in a “head-on collision”. The original paper on the topic was written in 1992. He spotted some unusual behaviour. When the two rings collided, they turned into many rings. He wanted to know why and how, and this experiment was done in 1992 when cameras weren’t exactly high resolution. So he set out to recreate the experiment for himself.

Four years later, they finally cracked it. And as well as being significant from a fluid dynamics standpoint, it’s also rather beautiful.

Once they’d figured out how to do it, they recreated it a number of times with different coloured liquids. And they filmed each collision in slow motion using a Phantom v2511 camera, capable of up to 1,000,000 frames per second.

And if you really want to know more about this, Destin uploaded a 12 hour “megacut”, shot over the course of four years covering the entire process.

It’s really fascinating just how much beauty there is in science. And there’s something to be said for never giving up, too.

How To Create A Steel Wool Light Painting Vortex

« Patent: Canon’s next 18-55mm lens might have an LCD display
Fixing discolouration during the dodge & burn retouch »