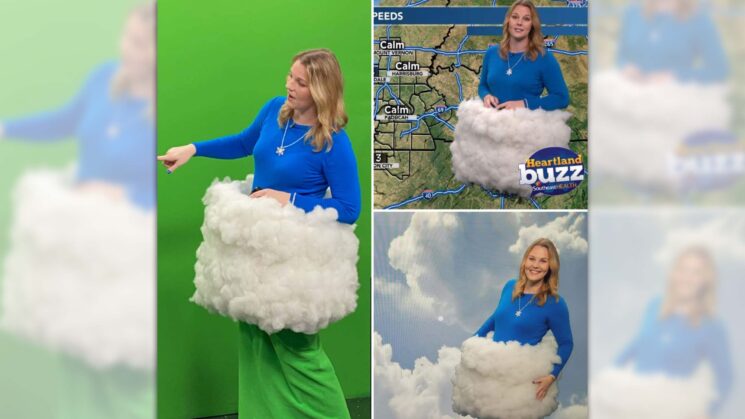 I’ve seen my fair share of cool Halloween costumes over the years. But meteorologist Lisa Michaels has won this year’s first place in my book. She appeared on KFVS News in Missouri and did a weather report dressed as a floating cloud, thanks to a clever green screen costume she made herself.

As you can probably imagine, this clever costume was made from “the cloud” and the green skirt. The skirt matches the color of the green screen so when Lisa appeared, it looked like she was floating on a fluffy cloud. Lisa told PetaPixel that she used lots of hot glue and fiberfill (for the cloud, obviously), and added some green fabric to cover her legs. This way they “disappeared” in front of the green screen and she looked like she was floating.

Lisa posted the photos of the costume to her Facebook, causing a flood of positive interaction. Most people were praising her for her creativity, and many also compared her to Lakitu from Mario Kart. A few people also pointed out that she should add some LED lights next time to mimic lightning. This reminded me of a DIY cloud lamp I’ve been planning to make for ages – and it definitely sounds like a great idea for next Halloween. Or for every time she reports an upcoming storm, why not?

Forecasting from the clouds this morning☁️ Happy Halloween!

“This should be a standard issue costume to all weather presenters everywhere. Just brilliant,” one Redditor wrote, as Lisa’s costume ended up there as well. And I couldn’t agree more! If this was the standard outfit of weather presenters on Serbian television, perhaps I’d even watch the weather forecast once in a while.