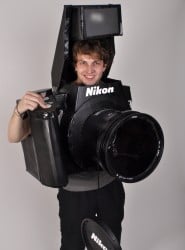 UPDATE: Tyler has posted a complete how to on instructables if you want to go and make your own camera costume.

Photographer Tyler Card was just nominated and instantly won the most unbelievable Halloween costume for this year. (We started and closed the contest with this submission by Adam Barr – Tyler’s roomemate. Don’t think anyone can top this. Not even a band of Paparazzi) It is a fully functional Nikon Camera (The long awaited D800 maybe?). And by saying fully functional I actually mean fully functional. It has everything you would expect from a digital SLR costume like a fake real lens and a fake real shutter button. Miraculously enough it also has a fake real LCD display on the back and a Paul C Buff remote trigger (let me guess, Tyler hates on-camera flash :)

This costume takes great photographs, my only concern for Tyler would be that he will not do anything but stand there and shot the entire party. (

You can see the camera in action after the jump.

“It’s a fully functional, complete with an LCD display, built in flash, shutter release button/wireless remote control. It is also capable of triggering my Alienbees strobe lights with a Paul C. Buff Cyber Commander, and winning any costume contest with the push of a button

and see how it was made here