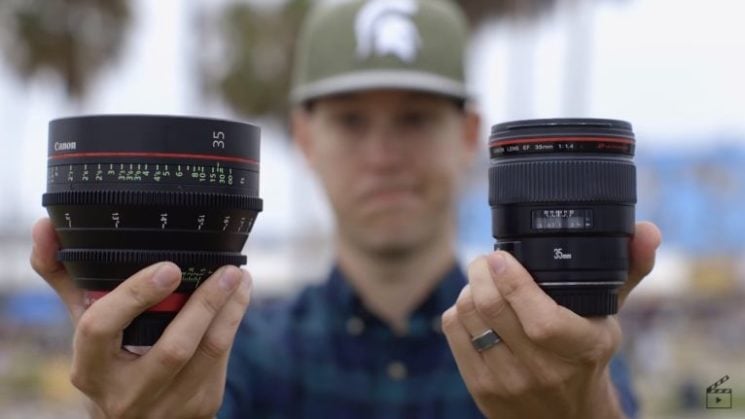 Cinema lenses are usually much more expensive than the corresponding still lensed. So, you may have second thoughts about whether you should or shouldn’t invest in them for your video project. After all, you can even take a cinematic video with your phone, right? Caleb Wojcik and Greg Farnum discuss the differences and give you some of the reasons why you should buy (or rent) a cinema lens after all.

Cinema lenses are more expensive for a reason. First of all, they’re geared differently, designed for pulling focus and changing aperture more precisely.

There’s another focus-related advantage: zoom cinema lenses are parfocal, which means focus distance remains the same as you zoom in and out, which isn’t the case with zoom lenses.

With cinema lenses, there are more blades on the iris, which makes the bokeh rounder and smoother. Then, if you’re shooting with multiple lenses, cinema lenses from the same company are all color-matched, and they are usually all the same in terms of physical size. This makes changing the lenses much easier and faster.

Another difference is between T-stops and F-stops. F-stop is the ratio between the diameter of the aperture and the focal length of the lens. When you change the focal length, the amount of light hitting the sensor will change, even if the aperture and all the camera settings stay unchanged. With T-stops, it’s measured how much light is being transmitted to the sensor. In other words, no matter which focal length you use, if the T-stop is the same, the exposure will stay the same.

Despite all the advantages, there are some downsides to cinema lenses after all. They are usually heavier than still lenses, so they make run-and-gun shots or traveling more difficult. Another disadvantage is more obvious, and it’s their price. They’re usually 4- 5 times more expensive than the stills equivalent. Still, some companies like Rokinon make cine lenses whose price isn’t that different from the equivalent still lenses.

Basically, it comes down to your project’s size and budget. If you’re a low budget, or just want to shoot a small project for fun, you can even do it with a smartphone. If you don’t need all the benefits of the cinema lenses, you can save up some money and go with the lens for stills. But, if you’re working on a larger project and want to make the shooting easier, then you should probably go with the cinema lenses after all.