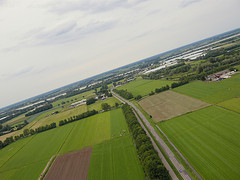 Some time ago we introduced R/C Helicopter Arial Photography, however Helicopters are not the only thing that flies, in fact R/C planes are cheaper to get in the air.

Although they provide less control they are still a good option to get your camera up high and they are lots of fun to take pictures with.

In this tutorial -manuel- will explain how to apply a similar concept for still and RC planes which are much cheaper.

What do I need?

The first thing you will need is an RC controlled plane. Beginner RC planes are great for RC beginners, they are also very good to start with when it comes to photography. This is because a typical beginner RC plane is easy to fly, it corrects itself, and is easily (and cheaply) repairable. The best known beginner plane (and arial photography plane) is the Multiplex Easy Star which you can see here: 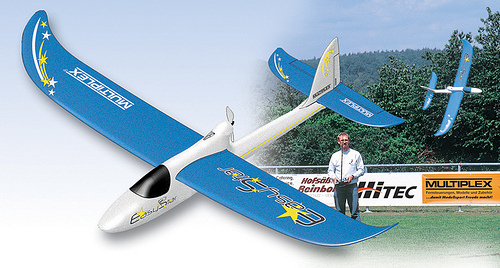 There are several reasons that makes this particular plane suited for Arial Photography. It’s easy to fly because it corrects itself, its wingspan is enough to carry a payload around 200-500 gram and the foam has plenty of space for a camera.

This is why I’ve chosen to do my aerial photography with this plane and recommend it as the best plane for all the beginners out there trying to learn fly on their own.

Getting your First RC Plane

You can choose to buy a barebones Easystar and benefit from the freedom of choosing all the electronics yourself or you can just buy a ready to fly starters kit (which I recommend to beginners).

While it is very tempting to start flying right away, it may be a good idea to practice first. (you can do this while you’re waiting for your plane to ship…) You can start with buying a simulator like the AeroFly 5. In the long run this can save you a lot of money in repair bills.

It will not save you from crashing, everybody crashes. The only pilots who have not crashed are inexperienced pilots. A simulator helps you avoid that first crash, though  and go straight into your “second crash”.

If you still have questions, I suggest you take a look at the begging forums at rcgroups. It is a great resource for RC plane beginners. 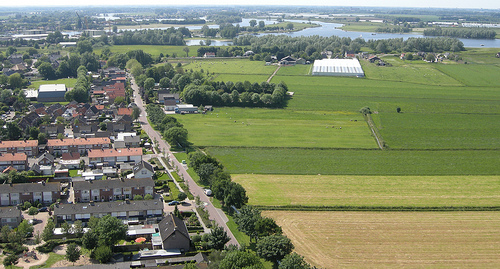 Getting Ready For A Camera

Once you mastered the control of your plane (both with a simulator and in real life), it’s time to add some little weight. It’s not a camera yet, just some added weight to help you get used to the way the plane will behave. The best way is to build it up with 100 grams at a time. Make sure you place the extra weight in/below the center of gravity of the plane. Keep on adding weight until you hit the weight that matches your camera. If you can still fly the plane then it’s time to add a camera. 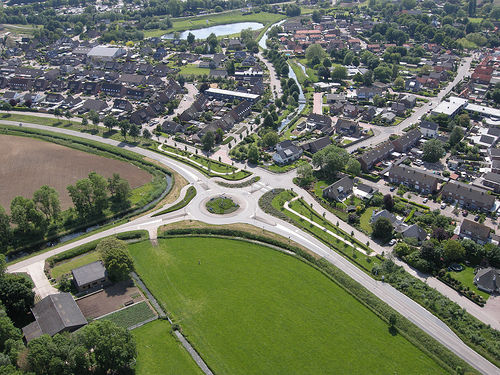 Selecting A Camera and Triggering System

You can practically use every camera as long as your plane can carry it. The Nikon coolpix P5100 is a good
candidate and is the camera used in this tutorial. It is light enough
and slightly outdated so it sells for less than its current more
advanced model

If you go the “Ready to fly” Easystar kit you have less choice when it comes to triggering. This is because the transmitter and receiver only have 3 channels (elevator, rudder, throttle) and you need a fourth for triggering the camera.

However it’s still possible to buy a camera with continuous shooting mode and a big memory card. The other option, as with RC helicopters is to make videos.

The other, more controlled option, is to upgrade your transmitter to a computer transmitter like the Graupner MX-12 or Graupner mx-16. These transmitters give you a lot more channels, so you only have to mount a servo (a small device that makes from an electronic signal a very precise twisting motion. It’s mostly used for controlling rudders) on the camera and you’re good to go. 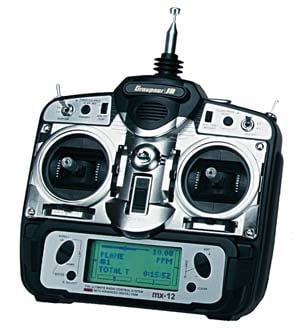 As far as mounting the camera goes, some people mount it under the wing which is the quick and dirty easy way to go. The plane is not flying that great anymore because its constantly rolling to one side. Others are mounting the cam in the place designed for the cockpit, this makes the plane nose heavy and it’s also not very crash resistance.

Using this method takes away the need to balance the plane when you insert and remove the camera. 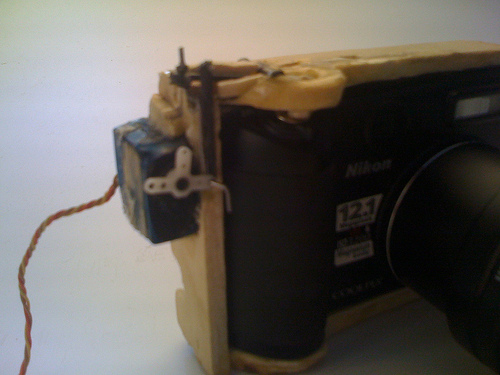 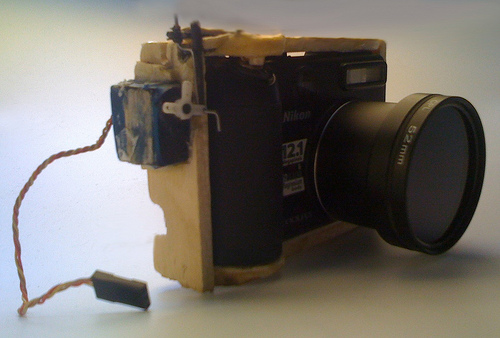 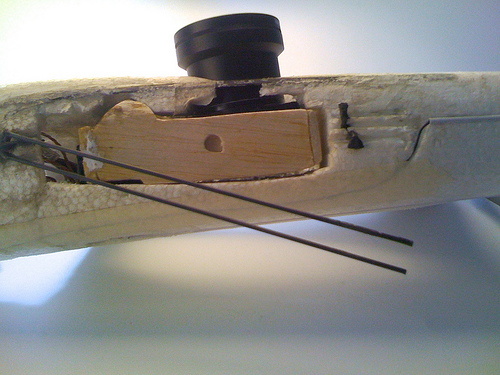 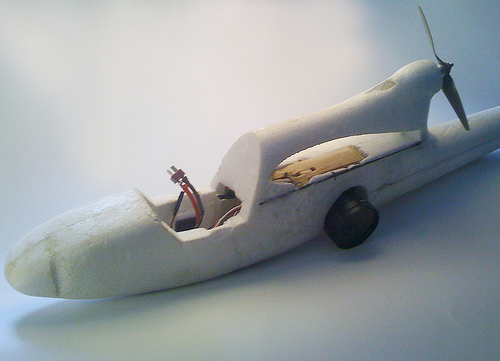 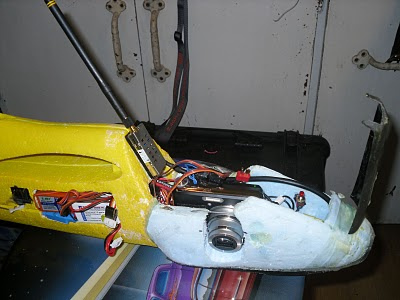 While in the training phase, you may want to trade off quality with a CPL or a UV filter. Those will help protect the lens.

When the camera is mounted on the plane and everything is working its finally time to fly. The conditions can vary quite rapidly as clouds go over the sun, and you have no access to changing the settings, so I recommend shooting in Aperture mode with as low aperture as possible. Focus at 8 (mountain symbol, for most P&S), flash off, timer off, and ISO as low as possible (64 for the Nikon 5100). The only exception is sunsets where you may wanna use Automatic ISO if your camera supports that. It will extend your range of acceptable photographs with the sun in or out of the frame.

It is very common for the air to be filled with fog, or for the sky to be over lit, so it is usually best to point the camera a little bit to the ground. This way you capture less of the air and more of the ground.

Another point of consideration is if to have the engine on or off while the shutter moves. If you are shooting in bright light, the answer to this question has almost no impact. But for sunset there is a definite improvement if the engine is temporarily stopped, putting the plane in gliding mode. The blur is significantly reduced. 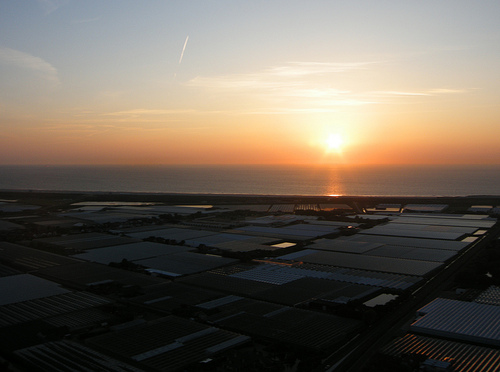 This is cool, you have to admit. There is nothing inherent in the plane that will stop you from doing this. However, you’re gonna loose eye contact with the plane which will make it kinda hard to control . But there is a way. The trick here is to get a live video feed from your plane, it’s hard but possible. More information here, and some more inspiration & examples on the subject is on this video

Parts Recap – For the plane in this tutorial

You can watch more photos on manuel‘s Flickr stream.