Just a few short years ago, nobody had ever heard the name Insta360. Established in 2014, they’re now one of the first names many people turn to when it comes to 360° cameras. And they’re constantly pushing themselves with bigger and better. Now, at CES 2019, Insta360 has announced the new Insta360 Titan, which shoots 11K 360 video footage.

While 360 stitching rigs have been produced with everything from action cameras to RED cameras, the Insta360 Titan houses the largest sensors currently available in any dedicated standalone VR camera. Insta360 says they used the larger sensors to be able to maximise image quality, dynamic range, low-light performance and colour depth.

It’s also the first dedicated standalone 360 camera to shoot 11K footage, too, and it can do it at up to 30 frames per second. Or, if 3D’s more your thing you can shoot 10K 3D at 30fps, too. And it supports ProRes 4:2:2 10-bit colour, further improving the dynamic range and colour performance retained in the footage it produces.

The Insta360 Titan contains the FlowState stabilisation similar to that shown in the Insta360 ONE X (review here!). Now, you’re not going to be walking around with a Titan on the end of a selfie stick like you might with the ONE X, but it does mean you can mount it to vehicles or other platforms to stabilise footage from a moving camera.

Underneath the unit, you can see a couple of the nine total SD card slots the Titan contains. While it’s not listed in the specs, I would imagine this is one for each camera’s raw footage, and then the 9th would be the stitched 360 footage track. Underneath we also see a power input, RJ45 LAN connector, HDMI output, Type-C USB as well as Type-A USB, and a microphone jack. As well as the external microphone socket, the Insta360 Titan also includes four built-in microphones and ambisonic sound. 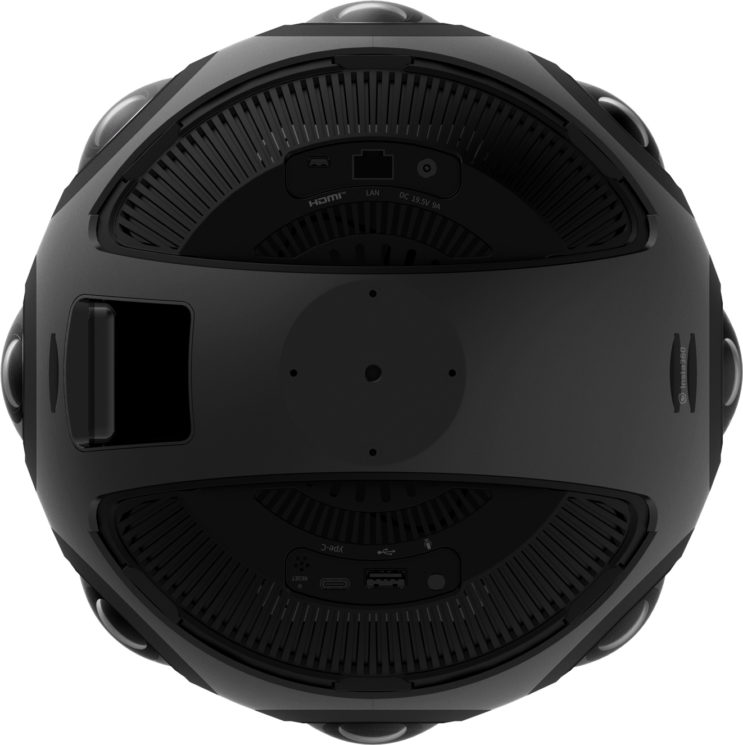 For power, it uses a 19v 9A power adapter or a 10,000mAh removable battery. It has 802.11b/g/n 2.4Ghz WiFi, with a maximum preview framerate of 30 frames per second for around 5 metres range. It also supposes video transmission of up to 300 metres and 1,000 metres for land and air respectively, using Insta360 Farsight.

The Titan is also compatible with CrystalView, Insta360’s proprietary 360 playback tech to “let creators deliver what they really shot”. To use their own words…

It renders in real time exactly the part of a video a viewer is watching – with no computing power wasted on displaying what’s behind their head — so that even mainstream smartphones can play back full-quality Titan content.

Anybody who’s ever done any kind of 3D work in Blender, Maya or 3DS Max knows how amazing that feature really is.

The Insta360 Titan is available to reserve now and will ship in April. They’re currently on show at CES 2019 in Las Vegas if you want to go check them out in person. I do warn you, though, such a system does not come cheap. If you thought the Insta360 Pro II was expensive, this one triples the Pro II’s price, coming in at $14,999.

You can find out more and reserve yours on the Insta360 website.

« This filmmaker found a 400mm f/6.3 prime lens for his GH5 for only €2
Kodak launches new Smile instant cameras, printer and Luma projectors »