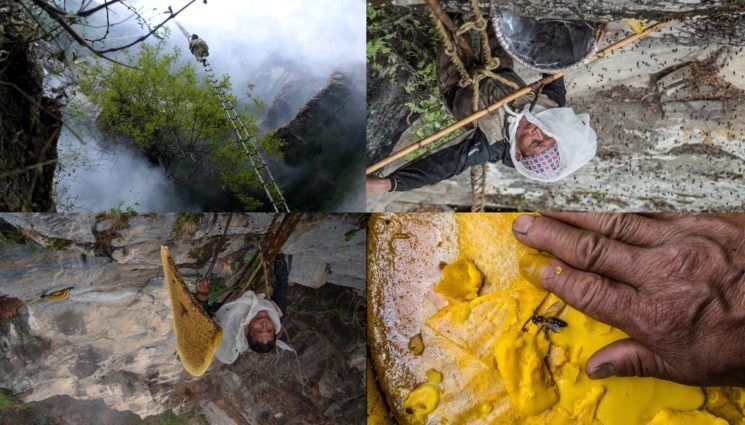 The job of a photographer or a filmmaker is full of challenges. But imagine the challenges one would face while hanging from a rope above the cliff and being stung by the largest bees in the world – all at the same time. Well, that’s what adventure filmmaker Renan Ozturk experienced while photographing the last honey hunter in Nepal.

Although he generally does films, this time he teamed up with National Geographic to make some stills of honey hunting in Nepal. The last honey hunter, Mauli Dhan, is retiring. So this hunt for honey of Himalayan honey bees could be the last one. With all that cliff hanging and being stung by bees, this brings another dimension to the challenge and pressure. And still, Renan and the crew did a phenomenal job and shared the “behind the scenes” in a truly awe-inspiring video.

The locals in Nepal use the honey of the Himalayan honey bees for medicinal purposes. However, it contains toxins from rhododendron, which means it’s highly hallucinogenic. It can be used as a powerful drug, and the locals sell it on the black market for as much as $166 for a pound.

Renan Ozturk and his team filmed the painstaking process of harvesting the honey. Along with Mauli Dhan, they climbed the slippery cliffs, got bitten by leeches and stung by bees. They are so large, that they managed to sting through their protective suits. On the other hand, Mauli didn’t wear a protective suit, and he climbed the hand-woven rope like it’s a joke. No matter how impressive it is to film all this – it’s even more impressive to do it for a living for decades like Mauli does.

I loved this video and watched it twice because I wish it lasted longer. If you have the same feeling, NatGeo has released the short about the honey hunters. It’s kinda like a prelude to the full documentary, which should be released worldwide in 2018. So, until then, enjoy the short and the “behind the scenes” video, and you can also check out the story and photos here. And when you think your job is hard – just think of Mauli.

[The Last Honey Hunter: Behind the Scenes via FStoppers]