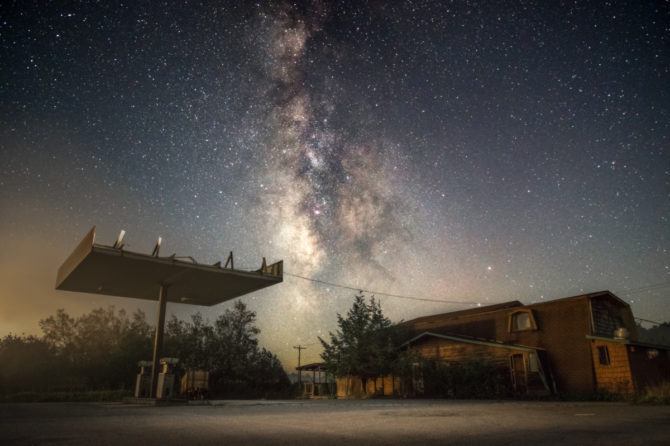 One of the biggest challenges when it comes to night photography is incorporating good foreground elements, but learning a few simple tricks will instantly elevate your game. If you’ve ever snapped a shot of the Milky Way in a very dark area on a moonless night, you will find that the landscape elements will often be silhouetted against the night sky.

This is because star light alone does not provide enough light for the camera sensor to detect, even at the sensitive, long exposures used to capture stars. I enjoy playing around with silhouettes myself but having a detailed foreground often makes a night time photo more interesting. 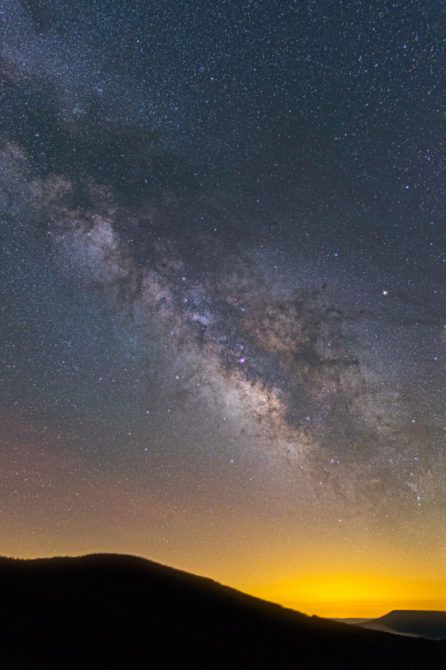 The Milky Way was the subject in this photo taken from the West Virginian Highland Scenic Highway. I only wanted to use the shape of the landscape to ground it, so details weren’t necessary.

Multiple exposures and blending using layers and masks in Photoshop combined with light painting is necessary to avoid that shadowy negative space in most cases, but that is beyond the scope that I intend to cover with this article.  There are tutorials online on the topic and I will probably devote a future post to blending.  For now, I’ll discuss light painting and taking advantage of external light sources to illuminate your shots. 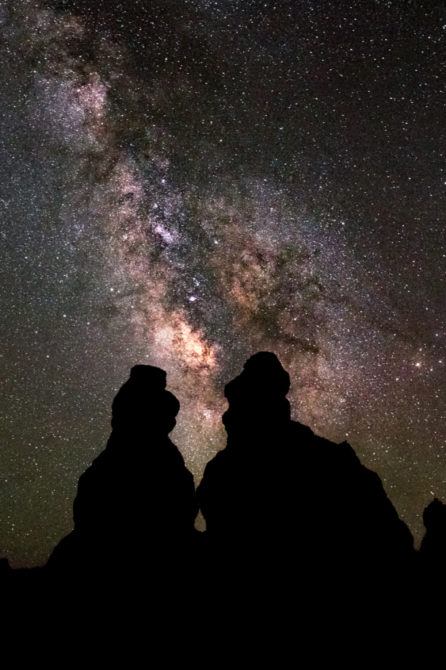 These natural stone formations called Hoodoos in Utah’s Bryce Canyon looked like people in the dark. If they were well lit in the it would distract from that illusion.

To understand how a camera collects light data, it might be easy to draw a comparison to a painter painting on a blank canvas.  Areas on the painter’s canvas will appear lighter with lightly applied brush strokes.  Apply more paint to the same area and it becomes darker and more defined by that color.  What we see as light are actually particles called photons that exist on the visible plane of the electromagnetic spectrum. Think of the camera sensor as being a canvas and photons, the paint.

When photographing stars and the dimly lit night sky, the aperture is set wide, ISO sensitivity is high and the shutter is usually left open for 15-20 seconds at a time in order to allow as many photons as possible to collect on the camera sensor and give us a complete picture at the end of the exposure.  A 5 second exposure will appear twice as dark as a 10 second exposure at night because there is half as much light collecting on our canvas.

A dark foreground will remain silhouetted at any of these shutter speeds because there are many times less photons that are being reflected off these objects than there is being emitted from the night sky.  There are exceptions where a highly reflective surface like concrete, limestone or sand may reflect enough light to be seen in camera with one exposure at these settings. 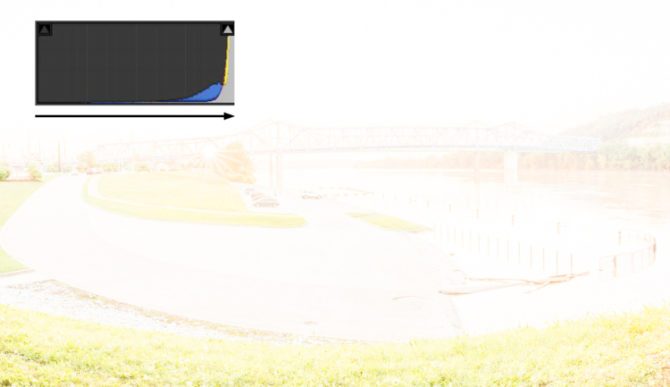 A daylight shot exposed too long. Many details are unrecoverable and the histogram is shifted to the extreme right.

On the other hand, take a photo during the day with these same settings and the image will appear entirely white.  This is because there are so many photons from the sun during the day, the sensitive light detectors in the camera have been excited to the point that they have been saturated with light and no amount of post processing can recover the detail in these areas once that happens.

This is referred to as clipping, or blowing out the highlights because the white values have been pushed to the absolute maximum value and the histogram will be strongly skewed to the right.

Due to the sensitive camera settings that are required to shoot the stars, it’s important to be sure our light source is not very powerful or we risk saturating the camera sensor with light and blowing out the highlights or making the foreground lighting too dominant in the scene. 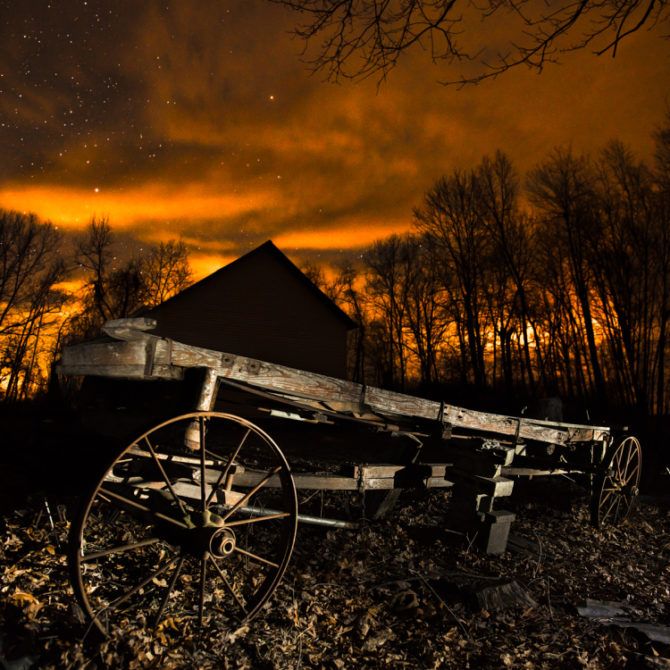 The wagon here was lit by quickly shining a flashlight over for just a few seconds during the exposure. The camera settings were: ISO 800, f/2.8, 20 secs.

For this task, I simply use low output LED flashlights or an LED panel.  LED flashlights are better suited than traditional incandescent bulb lights because they put out an even beam of light, especially if there’s a floodlight mode.  The small and cheap LED key chain lights work well because they are easy to control and can be turned on/off with a simple button click, or a headlamp with a dimmer switch.

I will also use an LED panel with adjustable brightness such as this one for constant, controlled lighting and these are well suited to light the inside of structures, creating silhouetted subjects, or to provide steady lighting for time lapse.  You can mount these on any tripod too, which helps.

To paint, you will quickly flash the light over the subject you want to light during the exposure, making sure to smoothly pan the light evenly over the foreground.  Just as with accumulating layers of paint, leaving the flashlight in one spot for too long will result in brighter areas.  Getting the right amount of light will take trial and error and I like to shine the light from an indirect angle to create shadows and texture.  Sometimes it can be helpful to “dampen” the light by placing a light cloth or plastic bag over the flashlight.

Here are some examples. 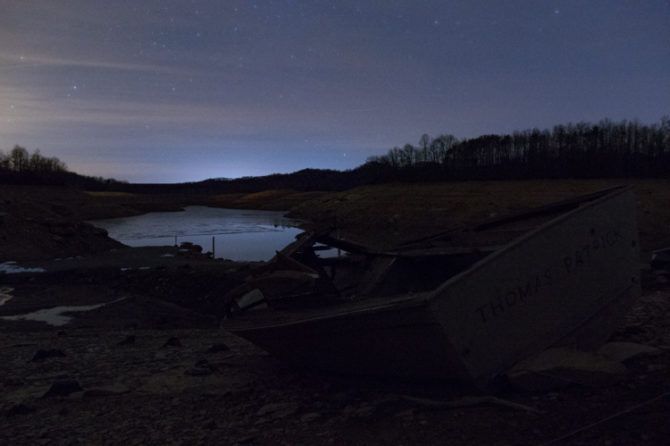 No lights were used in this shot. 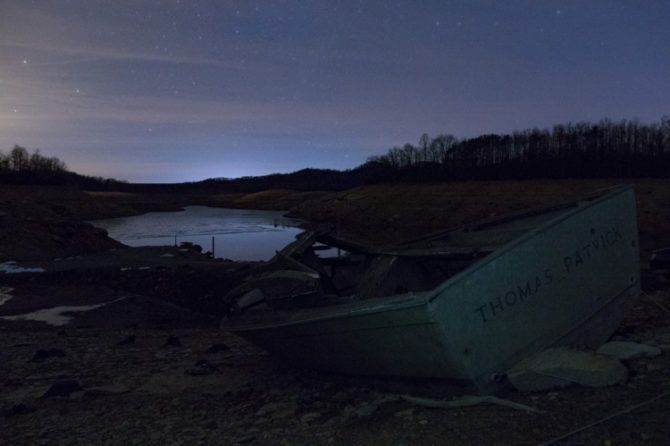 A flashlight covered with a plastic shopping bag lit the corner of the boat to provide more subdued lightning that would blend with the highly reflective surrounding land. The light was on during the entire 15 second exposure at ISO 6400 and f/3.5. 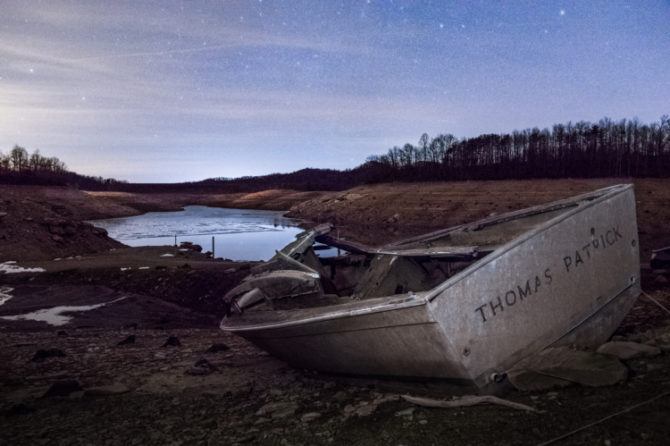 I took 7 shots using the same settings and lighting and stacked in Photoshop using median stacking in order to draw out more detail in the overall scene without increasing noise. 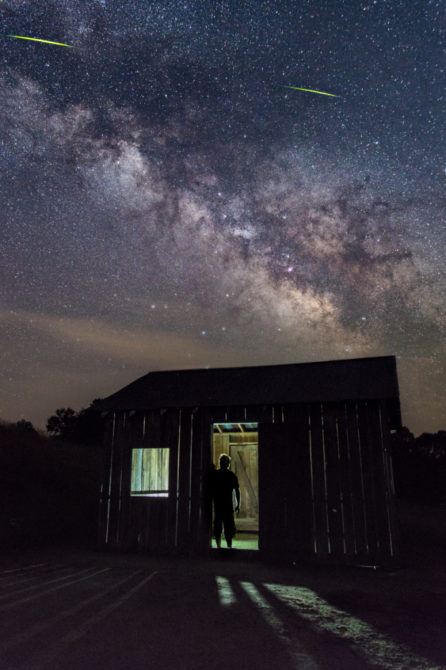 This is two exposures, the sky was a tracked shot using the astrotracer on the Pentax K-3II but it could easily be done in one shot. The inside of the shack was lit using an LED panel on a tripod with the dimmest setting. It is a 20 second exposure at ISO 3200, f/2.8 and the light remained on while I stood still for the entire 20 seconds. (Those yellow streaks at the top are fire flies)

Street lights can be annoyances when it comes to night photography, but sometimes you can use them to your advantage. 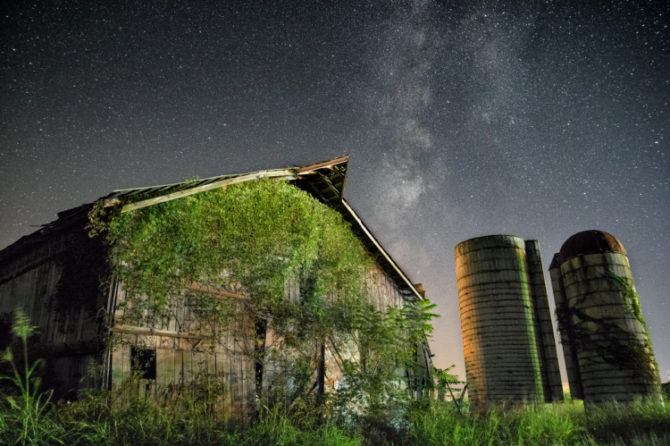 Moonlight and twilight can be used as lighting sources as well.  These can be done with single exposures and careful planning but combining exposures taken at different times from the same spot is the most versatile way to go.

For this shot, the milky way was taken 20 minutes before moon rise. I used a second exposure once the moon was high enough to light everything in the foreground as you see. ISO 3200, f/2.8, 15 secs. 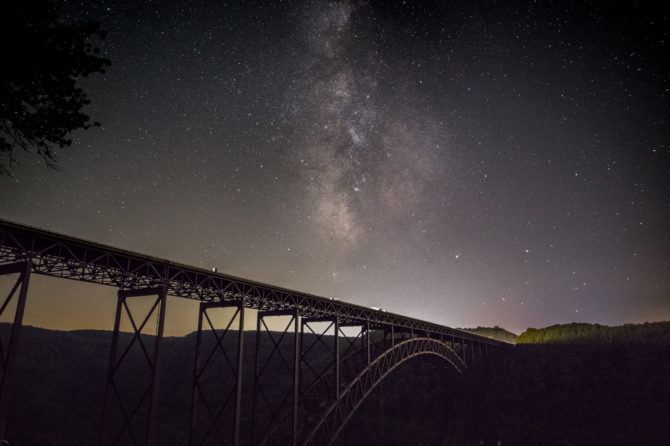 Here, the New River Gorge Bridge was shot at moon set early in the evening. I waited 2 hours later to shoot the Milky Way when it reached the center point of the bridge as it moved through the sky. ISO 3200, f/2.8, 15 secs. 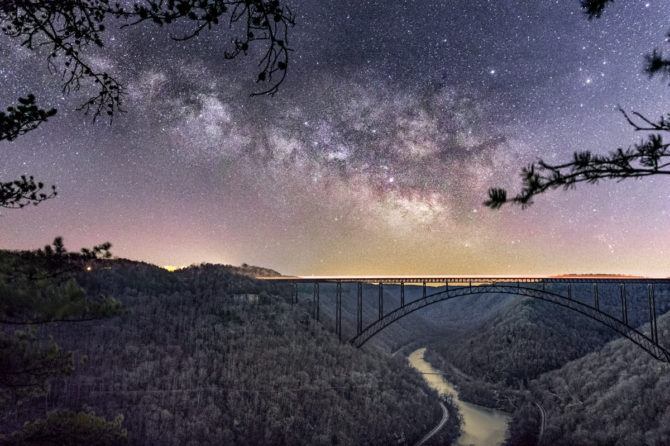 Another angle on the New River Gorge Bridge. This time I used morning twilight to provide lighting of the landscape. The Milky Way was taken at 3 am, while the landscape was shot about 3 hours later, a bit before sunrise. Additionally, 12 foreground shots were stacked in order to reduce noise. The time when astronomical twilight begins, or just before it ends is the best time for these shots because the result is not overly bright and blends well with the night sky. 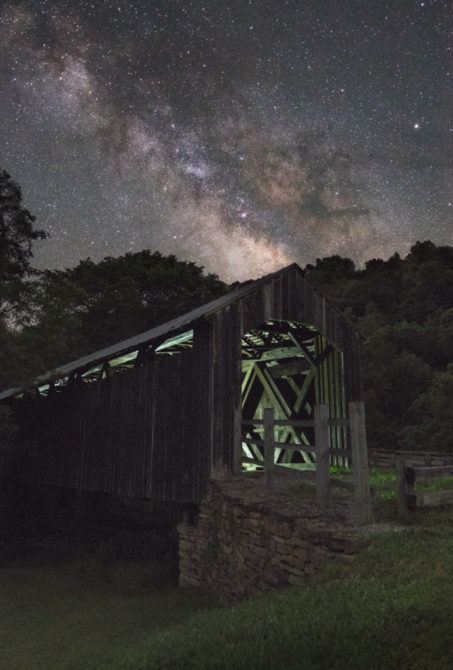 Jesse Thornton is a fine art photographer based in West Virginia specialising in landscapes. He has a particular fondness for the night sky, which often features prominently in his work. You can find out more about him on his website, follow his work on Instagram, or reach out to him through Facebook. This article was also published here and shared with permission.

These 3 things may prevent you from improving in photography