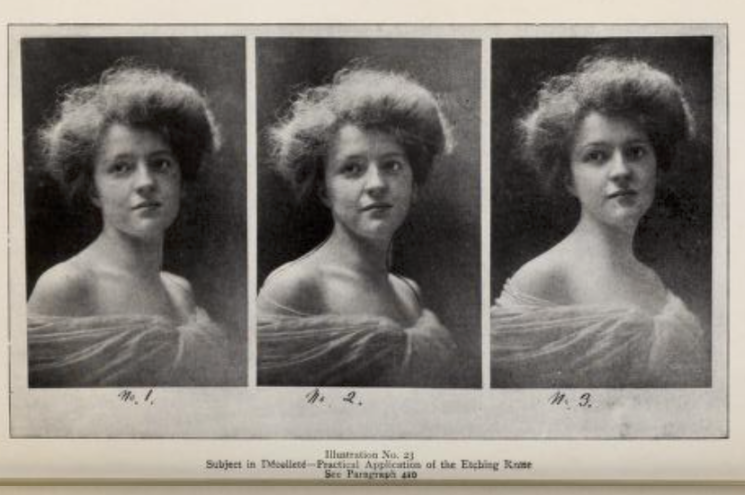 We all assume that Photoshop and the art of retouching is a fairly new phenomenon. When you think of image retouching you automatically think of celebrities made to look taller and slimmer, of blemish removal to the point of obliterating skin texture, and head swapping those pesky people that always blink in group portraits. But did you know that image retouching has been around nearly as long as photography, it was just done in a different way. This fascinating book (now in the public domain), tells you exactly how to get started if you want to retouch your images directly onto the negative.

The book is part of a series called the Complete self-instructing library of practical photography, by two wily sounding gentlemen: James Boniface Schriever and Thomas Harrison Cummings, and published by the American School of Art and Photography. The series is intended for the self-taught photographer and includes subjects such as negative developing, photographic printing, at-home portraiture, and of course possibly the most interesting is negative retouching and etching.

The book is full of absolute gems of wisdom, that are no less relevant today than they were in the early 1900s. Advice such as:

In delivering finished work to your customers, you do not hand them the photographic negatives, but the prints made from these negatives.

This sounds very similar to all those seasoned pros telling newer photographers in Facebook groups to never give away the RAW images! It also makes the point that is just as true today in that “properly controlling the source of light, correctly posing the individual, giving proper exposure, and, finally, developing the plate to obtain what was seen under the light, will in almost every case eliminate fully one-half the amount of retouching necessary.”

The book goes on to explain that “in the early days of photography, when the so-called “ wet-plate process ” was in use, prints were made direct from the negative without any alteration whatever, as the wet-plate rendered softer effects than are obtainable with the ready prepared dry-plate.”

Because imperfections were less visible, the book says, the general public was satisfied with an exact likeness of themselves. With the advent of the dry-plate, however, the “defects in the human face became more apparent on the negative, and there arose a demand for a greater softening of the lines and a removal of the more objectionable imperfections.” So it’s not a recent thing at all then, that we all wish to look better than our straight out of camera images!

Apparently very early retouching was done on each individual print, but that was far too time-consuming, particularly when multiple prints were requested. So the retouching began to be done directly onto the negative so that each subsequent print would be identical. There were two main methods of retouching: the first was using a lead pencil after applying a solution of retouching varnish known as ‘dope’. The retoucher could then draw directly onto the negative. The second method was etching and involved scraping or shaving away with an etching knife that had a very sharp steel blade. 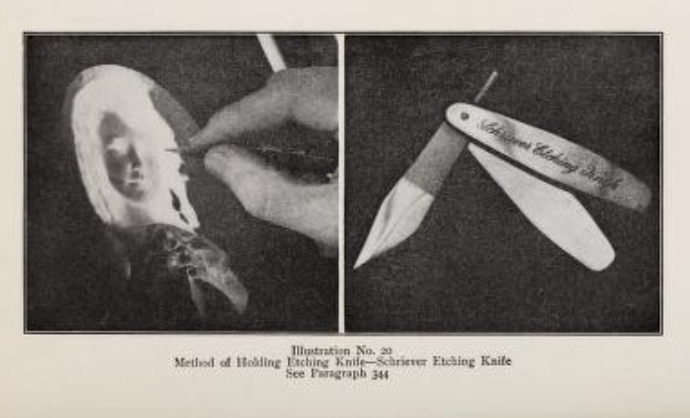 The book then lists all the equipment needed to embark on learning negative retouching. If you want to follow along at home you will need:

That’s quite a bit more than today’s list which would probably be at most a subscription to Adobe Photoshop and Lightroom, a computer and a Wacom tablet and pen! But if you’re going old-school this is how you should sit: 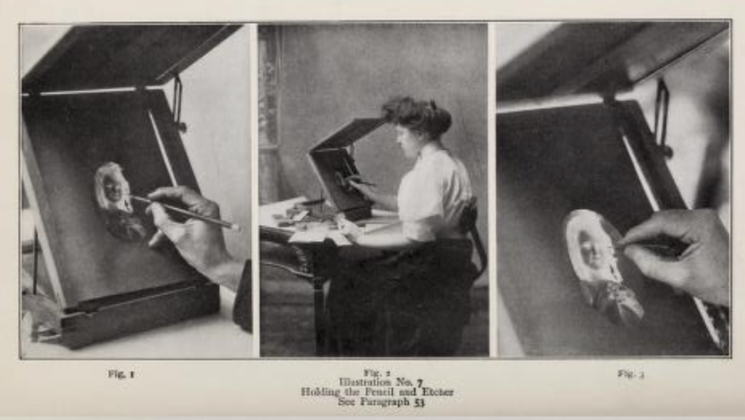 Then follows several chapters of practice strokes and assignments before getting into troubleshooting and more complicated territory, which let’s face it, is the most interesting part.

How many times have you been asked to photoshop someone’s double chin or bald spot? How about adding a necktie to make a man look more gentlemanly, or removing freckles from somebody’s face? In today’s slightly more body-positive attitude it feels a little bit icky reading this section, particularly as the language used to describe the subjects is slightly derogatory. In advice on dealing with double chins, it says it “applies mostly to aged and fleshy subjects,” and that you should “unite the chin with the throat by working away the folds of flesh with the pencil or knife, or by use of both. In profile views, you can cut away parts that are objectionable and give a very nicely shaped chin…With very fleshy people the neck is usually quite thick and sometimes quite baggy.” I feel rather sorry for ‘fleshy’ Victorian people at this point. 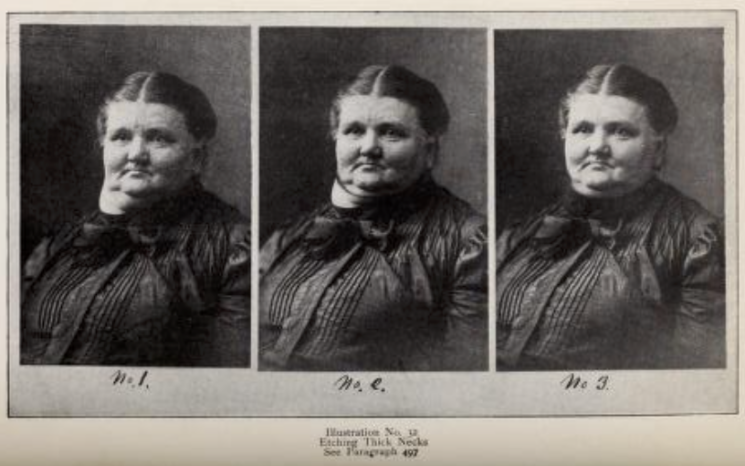 The outline on the negative is done with the point of the etching knife, gradually scraping or shaving a line which supplies the collar outline. With this done the first stage of the work is completed, as will be seen in Fig. 2. For the final stage all of the neck below the outline is etched away with the curved side of the blade. The etching away of the neck also supplies the collar to the dress. After the film is reduced and etched away, the harsh lines are then gone over and softened with a BB pencil and a slight high-light worked on the collar, which gives the dress a perfectly natural appearance, as will be seen in Fig. 3.

Men don’t get off lightly either, with reference to removing bald spots.

Often when the hair is thin on semi-bald portions of the head, an undesirable flesh spot will be visible. Hair should be etched on in those portions, to give a pleasing appearance to the portrait.

The example below shows how items of clothing could be added to the negative, in this case, a gentleman’s tie and collar have been drawn in. 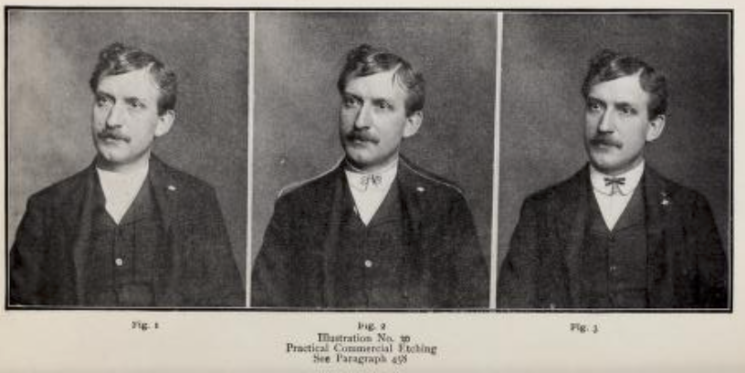 Finally these two sets of images show how the images looked before and after the entire retouching and etching process. It is quite remarkable how they were able to do this sort of work, often in minute detail, and without the luxury of being able to use layers and delete them when things didn’t go to plan. 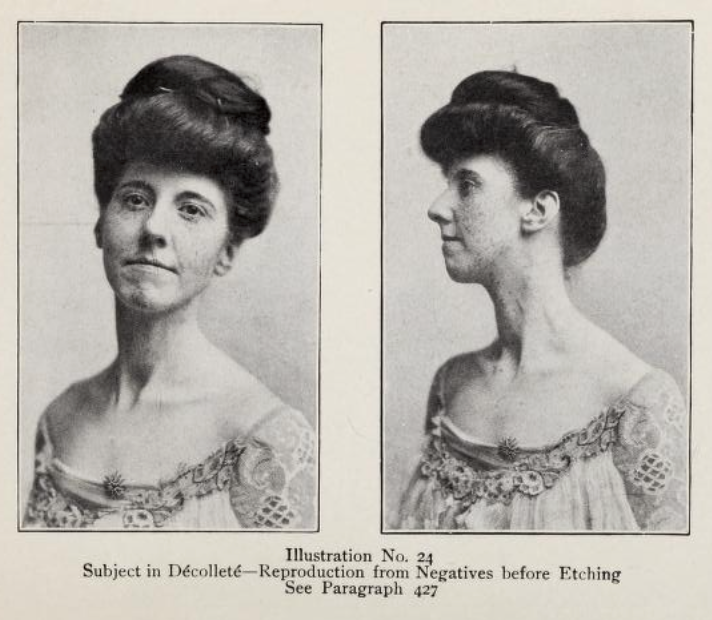 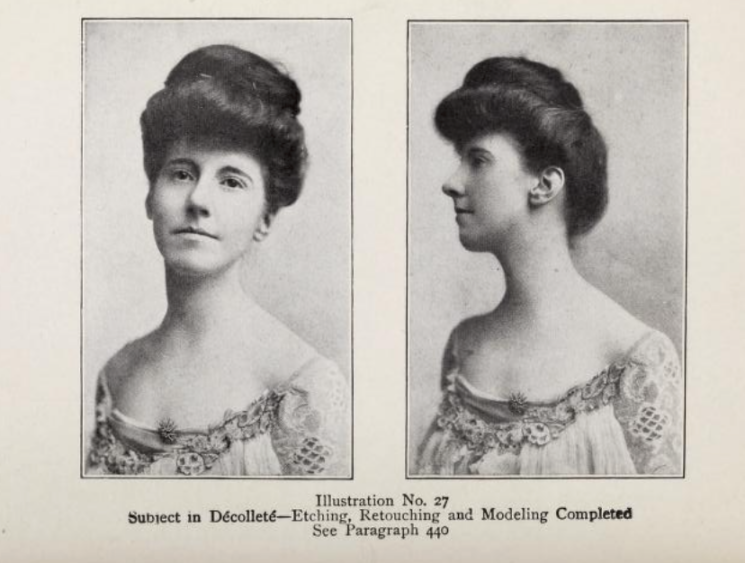 Knowing how often I will completely remove whole layers of edits later on in my work flow, I am definitely going to stick with my computer and Photoshop!

Learn How, When and Why to Use Negative Fill (Including DIY Solutions)