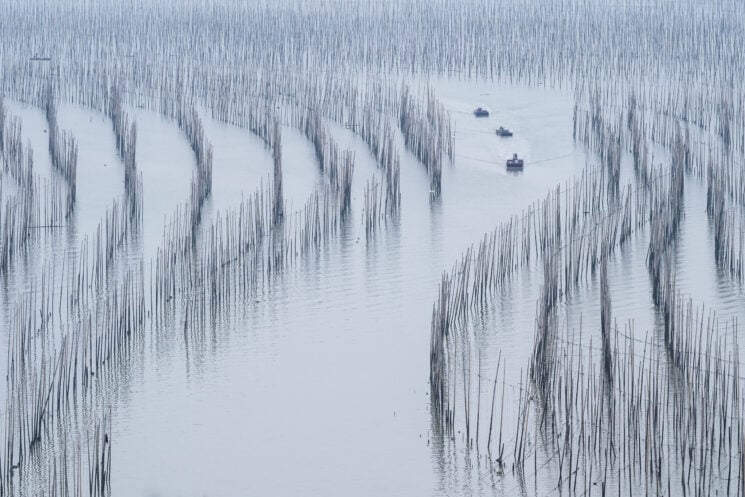 You’re in an exotic location where time seems to stand still. A farmer dressed in an outfit fit for the 19th Century walks slowly past, leading his buffalo to the field through the morning mist. Fishermen in straw hats mend their nets, effortlessly standing in the best light possible. If it all sounds too good to be true, it is, at least in Xiapu County in rural China where “all the world’s a stage, and all the men and women merely players”.

Xiapu County lies on the Eastern coast of China in Fujian Province and used to attract little to no attention. However, a boost to rural tourism in recent years has seen a meteoric rise in its popularity, with crowds of visitors flocking to capture its bygone gentle village atmosphere. The problem is though that it’s all fake, with most of the so-called villagers being paid actors to play a role. If you search on Instagram for Xiapu County you will find many beautiful images of what look like bucolic scenes of rural life. Some admit to being on a photo tour, many do not, and tout the images as reality. In fact, even more interestingly, even some visitors have been unaware that the area is not real and feel disillusioned and scammed once they found out the truth.

“First of all, the so-called rural people in the social-media photos are all actors, and the county itself is pretty much like a staging area for a photoshoot,” one reviewer says. “In reality, without the filters, the place is extremely ordinary. The beach is dirty, and the seafood restaurants are famous for ripping people off“.

Weibo poster OuQiDeBao adds “Under the trees, the old people walked around and it kind of looked like a movie. But the mist was just smoke from a burning pile“. Even the actors themselves feel slightly remorseful when they realize that some of the visitors don’t realize it’s all fake. “When they hear that these are staged, their hearts will drop a little,” said Liu Weishun to the NY Times, “So sometimes I’ll just say, ‘Oh, it’s not the right season, just to make them feel better.”

But is this really any different from other tourist attractions that aren’t exactly real? We live in a world now where it seems like everyone communicates through visual means. Instagram currently boasts 1.74 billion users worldwide, and it seems like people will do almost anything for the ‘gram. In Spain, you can visit the Spaghetti Western film sets where actors will stage scenes from popular movies. In Serbia, you can visit the wooden town of Mokra Gora built by director Emir Kusturica.

Let’s also take into account other parts of the world which are not movie sets but feel no less fake. Historical re-enactments in places such as the Western town of Deadwood are very popular, as are the living history settlement of Jamestown which also employs actors. So many places cater/exploit photography enthusiasts looking for a good photograph. Take Antelope Canyon in Arizona for example. They shut down their photography tours and now you cannot take a tripod and you are ushered through the canyon in a large group taking identical photos to everyone else.

I think the main issue once again, is the lack of transparency. If I go to a place and take photographs I want to know that what I’m witnessing is either real or staged. From an artistic point of view, the images of Xiapu County are no less beautiful, however, there is a certain dishonesty involved if it is left undisclosed that the images were staged for photographic purposes. In a similar vein, it feels a little murky when someone shares an incredible portrait image and then you later discover that it was taken during a photography workshop and the entire scene was set up by the teacher of the class.

Perhaps we are all guilty of this to a degree, nothing is as it seems, and we are all perhaps a little too intent on capturing the perfect photograph over keeping it real. OuQiDeBao sums it up in his Weibo post saying “in this world, it seems that no one cares if they are fake or not, as long as they take good-looking photos.”

« The Manfrotto Move ecosystem wants to make your entire support system modular
If you want to learn the original art of negative retouching, this book from 1908 will teach you how »