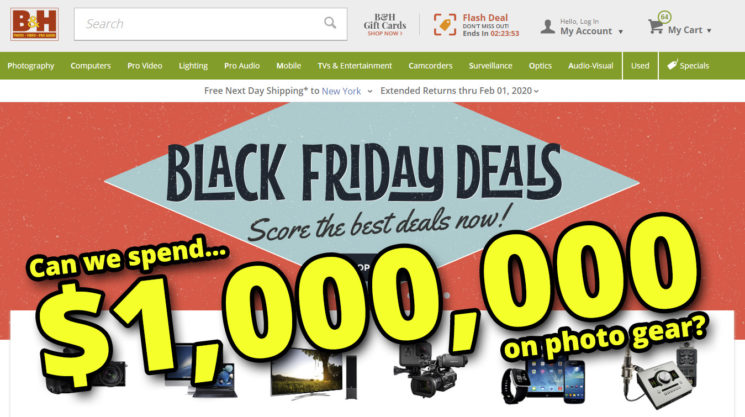 While the world is looking for bargains today, we thought we’d look at the opposite end of the spectrum, the most expensive gear we could find on the B&H website this Black Friday. Our plan was to produce a setup that, if you won the lottery, you might actually consider buying. Gear that should work well together, and costs a ludicrous amount of money.

Can we actually spend $1,000,000 on photography gear? On a kit that could actually serve a useful purpose? I mean, sure, we could spend $233K on just one lens and adapt it to a Sony, but where’s the fun in that? Ok, scratch that, it does sound kinda fun, but it’s not exactly practical, is it? And that’s what we’re trying to look at here.

We’ve tried to organise this into logical sections, so, let’s take a look at what we could if we had a million dollars to spend.

That’s barely 10% of our million dollar budget, though, so let’s have a look at what else we can buy. We’ll need lights, of course, so how about…

That should cover you for most photography lighting situations you might find yourself in. Drone shots seem to be becoming more important to clients these days, particularly for weddings and events. So you might want to think about how you’re going to get that camera in the air. The DJI Matrice 600 with the Hasselblad A5D-50c is no longer available, so we have to look at other options.

The drone has put us over the quarter of a million-dollar limit, once we factor in tax. For the purposes of this post, I’m assuming we’re walking into the place or ordering from somewhere in New York, where B&H is located. Right now, the final figure stands around $283K, including around $23K in tax. If you are having it delivered, though, that’ll only cost you $523.85, which is a bit of a bargain. That price doesn’t include the special delivery items that will come straight from the manufacturers and carry a slight extra cost. Let’s call that another $500 to be safe.

It’s not a million dollars, though, is it?

We’ll need a decent computer to be able to process all those massive images from those Hasselblads, so let’s look there. Yes, we added a laptop earlier, but that’s just for when we’re out and about shooting tethered or editing on location. You can’t exactly carry your desktop with you everywhere, can you? And we’ll need one of those for working at home.

The desktops on the B&H website look pretty weak, to be honest, so let’s build our own from scratch.

You’ll need a way to communicate with your computer, so naturally, you’ll want…

And even though we have the Wacom Cintiq in there, we can’t really rely on that as our main monitor. So, we’ll need some better displays.

Our computer, though, has only cost us around $84,000, bringing our total to $367,609.25 (including tax and shipping). Let’s say we add about another grand for cooling and miscellaneous cables to the computer.

Oh, it always seems to happen, doesn’t it? I forgot memory cards for the cameras, and card readers. The Hasselblad H6D-400C takes CFast 2.0 and SD cards. The X1D-50c also takes SD, so that’s a fairly easy list…

Ok, now we’re up to almost $380K (bearing in mind some of these items are actually on sale for Black Friday!), and this is where I’m now stumped. 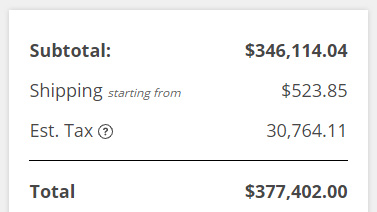 We’re $620K short of spending our million dollars. I really thought it’d be quite easy. Even if we add a few more lenses to the Hasselblad, and an extra light or two, we’re still probably adding less than another $100K. Even if we added those extra lights and lenses and then bought double of everything, so we had backups, and backups of our backups, we get close, but we still fall just a little short.

So, while we have failed to spend it all, it is an impressive looking list. And it’s nice to know that even if you did win the lottery, you could pretty much buy all the photography gear you ever dreamed of and still probably come home with some change. We did miss a few little things, though, like polarising and ND filters, bags to carry it all in, and other miscellaneous items.

If we expanded the criteria to cover video production, though, and not just photography, I’m pretty confident we could easily top the million-dollar mark. I mean, the Sony F55 alone is $83K + Tax. But maybe we’ll do that list another day.