In this article, I will share how I shot a Milky Way panorama, and how I later stitched the images in Lightroom. But, first some background.

Last summer we spent our vacation in Tuscany, Italy. Spending almost a week on a wine farm in Italy didn’t create any standing ovations initially. Then it struck me that the Milky Way season had just started in southern Europe. Once this was established, I started envisioning how cool it would be to shoot the Milky Way core, and perhaps even a few panoramas. My only concern was light pollution. Would it be possible to capture what I envisioned at the location we stayed at, or would I have to spend hours in a car to find a decent spot?

It turned out that this small wine farm where we stayed, just outside Castellina in Chianti, was perfect. On our second evening, I headed out when it was dark enough for night photography.

How I shot the panorama

In the dark, it was pretty easy to make out the Milky Way. It formed the familiar beautiful arc. The Milky Way actually hung so low in the sky, that it was possible to shoot the “entire thing” using a 15mm lens. Not only that, I only needed to take one row of images. I didn’t bring a panoramic head to Italy, so my biggest challenge was to get the tripod perfectly leveled. Our son illuminated the tripod with his cell phone while I worked the tripod legs. It is vital for the end result that tripod and camera are leveled when swiping across the scene.

Since I was shooting wide – at 15mm, it was necessary to have at least 50 percent overlap between the frames. This much overlap is needed to eliminate the risk of stitching errors, and distortions. How did I know that the overlap was around 50%? I didn’t. In the dark, it is almost impossible to figure out, so I made some educated guesses based on silhouettes and bright stars.

I took nine verticals shots to cover the entire Milky Way arch. I shot at ISO 6400, 20 secs, f/2.8. I used the Pentax K-1 coupled with the Pentax 15-30, leveled on a Sirui T-1205Sk. I also made sure that I had plenty of room on either side to crop. The two images below show my starting point and ending point. 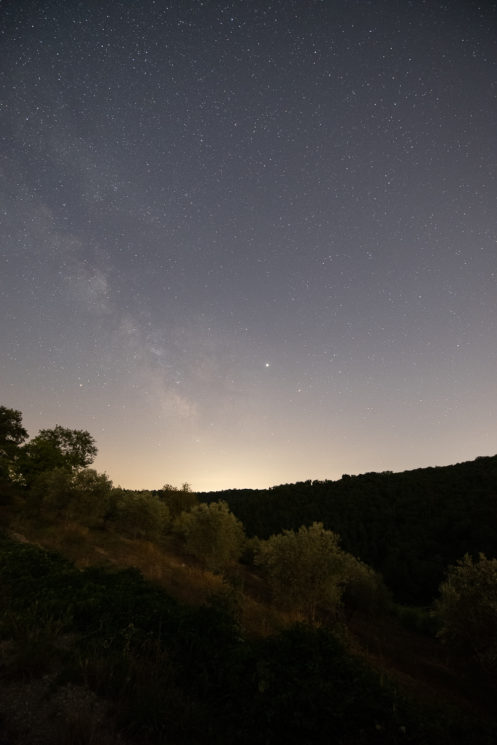 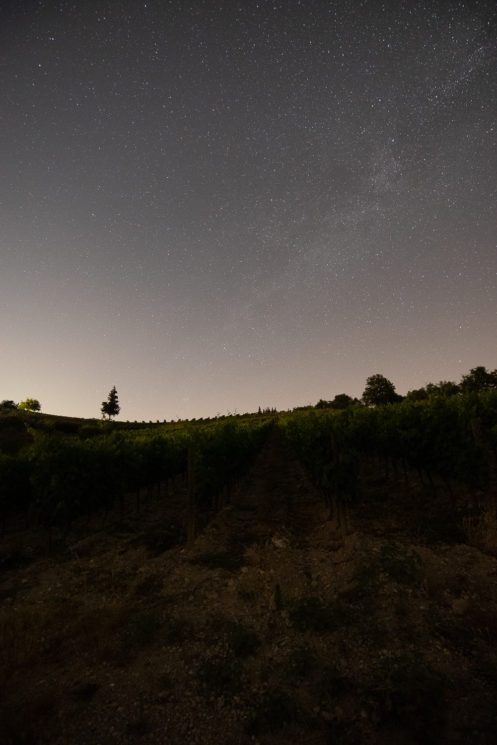 How I stitched the images in Lightroom

Lightroom does a very good job when it comes to stitching panoramas, even Milky Way panoramas. The first thing I did, was to select the nine images. Then I right-clicked, and in the new pop-up menu, I went to Photo Merge and selected Panorama. The software started the stitching process. After a while, it provided a preview image and some menu options. Let’s have a look at some of the options:

The first image shows the preview without any options being checked. 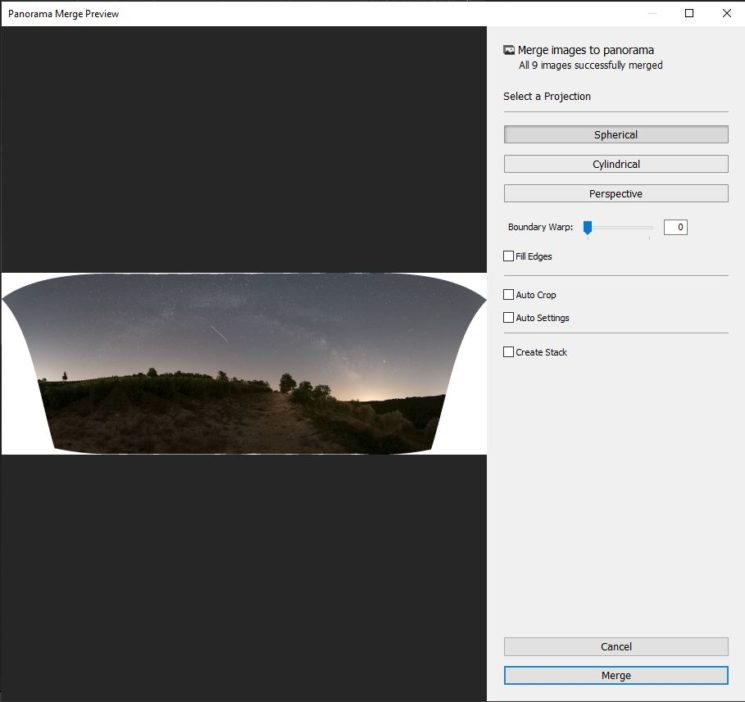 Boundary Warp is a great feature that was added to Lightroom a few years ago. If you move the slider towards the right it is the same as telling Lightroom to begin to stretch corners and edges to fill in all the blanks. Sometimes it works well to go all the way to 100%, at other times a lower value is better. The next image shows Boundary Warp set to 100% vs the original photo. 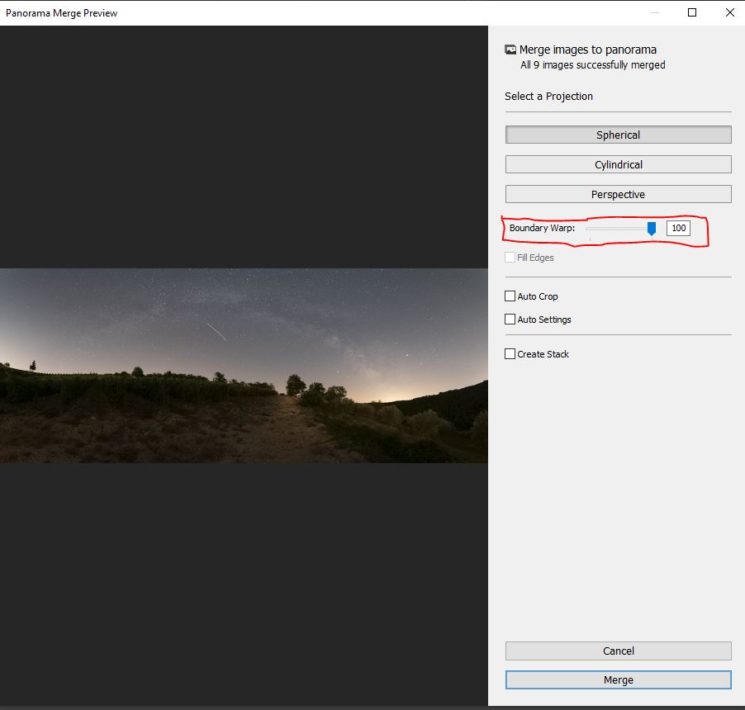 The lone tree to the left is now askew, and Lightroom produced some curves on either end of the image. My next attempt was to set Boundary Warp to zero and check Fill Edges. Lightroom now launches a content-aware algorithm, and you can see the result in the next image. 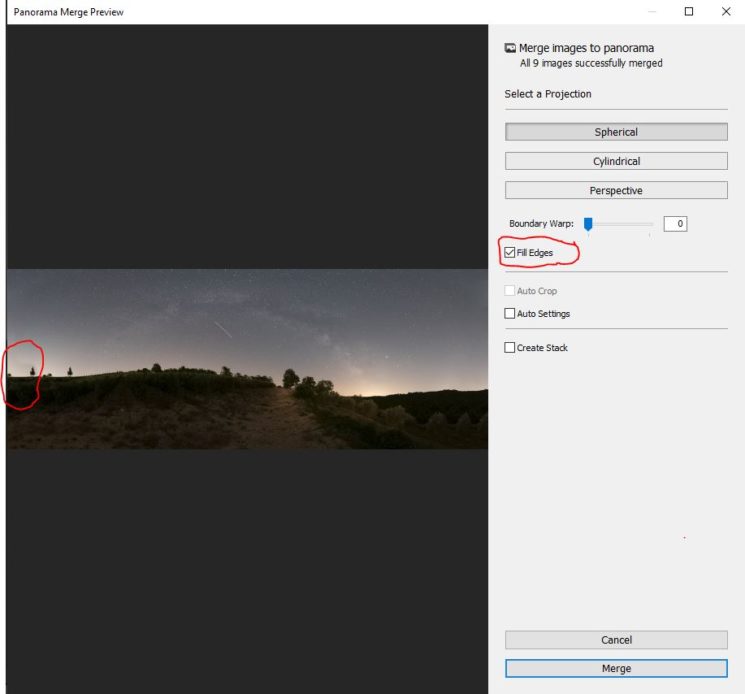 I immediately noticed that the algorithm had replicated the tree to the left.  I could, of course, have cropped that part. However, I assumed that since there was repetition at that end it would be so at the other end as well. Next, I wanted to examine if Boundary Warp in combination with Fill Edges would reduce any repeating patterns. It didn’t as we will see in the image below. 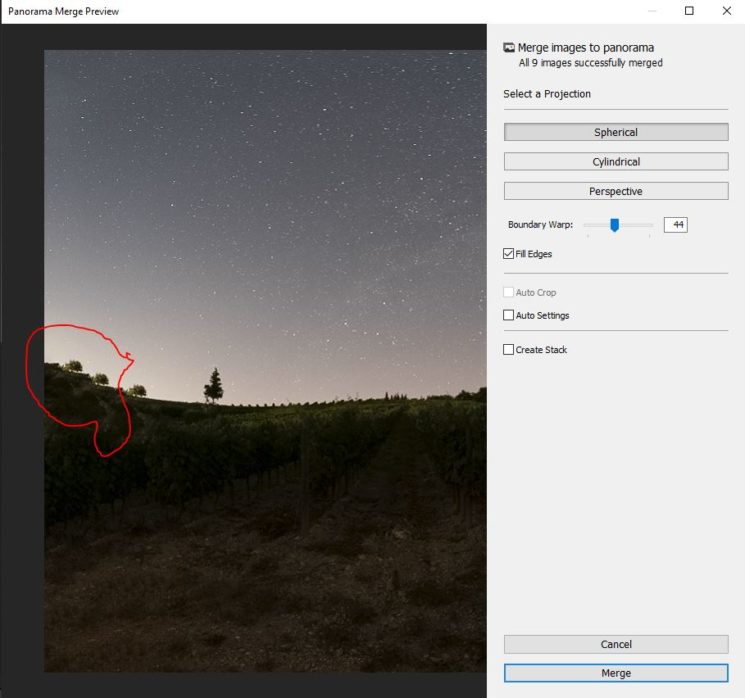 To make a long story short, I ended up with a mixture of Boundary Warp and Auto Crop. I felt this combo gave me the best result. 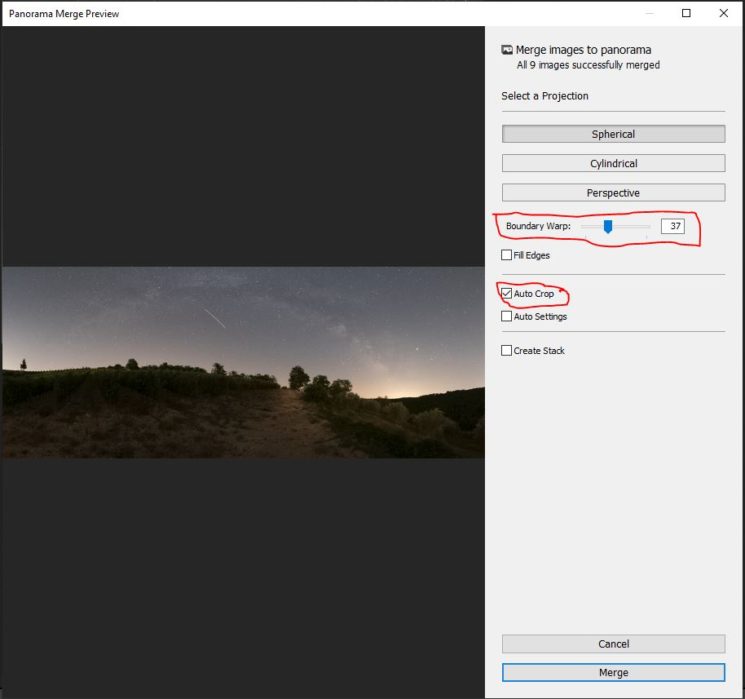 Now, I was happy with everything and clicked Merge. Lightroom embarked on finishing the panorama. The next image is the final output – a stitch from nine straight-out-of-camera verticals. I do not carry out any pre-editing before the stitching process.

I continued to edit the image in Lightroom, and about 30 mins later I had a version I felt was decent enough to post on here.

« Metabones has released a Canon EF to RF speed booster to reduce the EOS R 4K crop factor
Draganfly is developing “Pandemic Drones” that can detect fever, coughing and other health aspects »