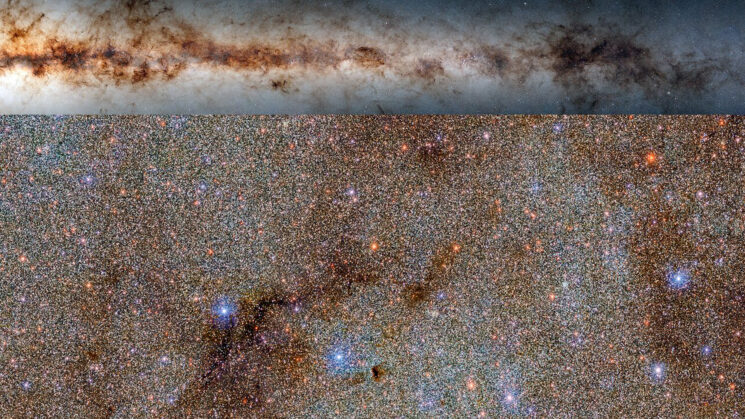 Scientists recently captured a starry sky image that will make you gasp in awe. Using Dark Energy Camera in, The National Science Foundation’s National Optical-Infrared Astronomy Research Laboratory (NOIRLab) released a survey of only a portion of Milky Way, and it shows billions of stars and other celestial objects in staggering detail. It’s not only awe-inspiring and strikingly gorgeous, but it’s the largest star catalog of our home galaxy that’s ever been recorded so far.

The project is called Dark Energy Camera Plane Survey (DECaPS2) and it took scientists two years to complete. It comprises 21,400 individual exposures which produced more than 10 terabytes of data. That’s quite a lot, but it was well worth it, as the survey identifies approximately 3.32 billion objects, as NoirLAB explains. The Dark Energy Camera used to capture this stunning composite is located in Chile, at an altitude of 2,200 m (7,200 feet). Thanks to its vantage point, it gives astronomers an “unrivaled view of the southern celestial hemisphere,” making it possible to capture so many celestial objects in such detail.

Researchers behind this project published their results in Astrophysical Journal Supplement. Andrew Saydjari, a graduate student at Harvard University, researcher at the Center for Astrophysics of Harvard & Smithsonian and lead author of the paper said:

“One of the main reasons for the success of DECaPS2 is that we simply pointed at a region with an extraordinarily high density of stars and were careful about identifying sources that appear nearly on top of each other. Doing so allowed us to produce the largest such catalog ever from a single camera, in terms of the number of objects observed.”

“When combined with images from Pan-STARRS 1, DECaPS2 completes a 360-degree panoramic view of the Milky Way’s disk and additionally reaches much fainter stars,” explained Edward Schlafly, a researcher at the AURA-managed Space Telescope Science Institute and a co-author of the paper. “With this new survey, we can map the three-dimensional structure of the Milky Way’s stars and dust in unprecedented detail.”

« #NoFilter: Bear takes 400 selfies using trail cam
This project puts you in charge of a satellite to let you take photos of Earth »