US drone manufacturer Draganfly has announced that they’re developing a drone system that can act as a “global early warning system” for signs of a pandemic. Its camera can detect signs of a fever, detect coughs and even breathing and heart rates through the use of deep learning AI.

You might not have heard of Draganfly, but they say that they’re the oldest commercial drone manufacturer in the world, with their first being sold in 1999. But they don’t make consumer drones like companies such as DJI. Their focus is more on the industrial, commercial and research sectors.

The drone is part of something called the Vital Intelligence Project, for which Draganfly has been selected as the exclusive global systems integrator. Vital Intelligence Inc is a healthcare data services & deep learning company, and they’re working in conjunction with the University of South Australia (who just happened to be Draganfly’s first customer way back in 1999) with some help from the Australian Department of Defence Science and Technology Group.

Draganfly is honored to work on such an important project given the current pandemic facing the world with COVID-19. Health and respiratory monitoring will be vital for not only detection, but also utilizing the data to understand health trends. As we move forward, drones and autonomous technology doing detection will be an important part of ensuring public safety

– Andy Card, Director of Draganfly and former Secretary of Transportation and White House Chief of Staff.

Its goal is to help serve as an early warning system for a potential viral outbreak and track the status of COVID-19 and how well the safety measures set in place are working on the general population. 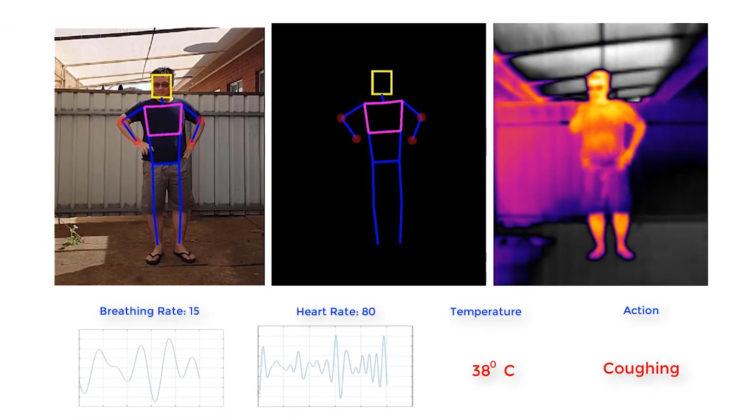 The image above is essentially a mockup of what Draganfly says it can detect when completed, but they say that it will be able to detect fever, breathing and heart rates, coughing and somehow, even blood pressure. The system involves utilising new and existing camera networks including automated and remotely controlled aerial vehicles for health monitoring. Their focus will be crowds, workforces, airlines, cruise ships, convention centres and potentially at-risk groups, such as senior care facilities.

It might all seem a little “Big Brother”, but with the crisis currently facing the world, is it really that much of a surprise that such technology is being developed? No word has been given yet on exactly when it may be completed or implemented, but it probably isn’t too far down the road.