If you thought that building a tower out of salt grains is a hard thing, think how hard it would be to photograph it in a nice way.

Photographer Alex Parker did manage to build a small tower of salt grains and take its picture. 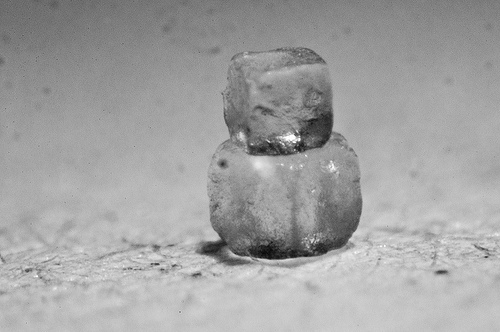 The trick was to use two lenses mounted in reverse to each other. The amazing macro is done by using a 18-50mm f/2.8 lens reversed on top of a 70-200mm f/2.8. This can gain magnification of about X11.Alex explains why there are only two grains:

“I was going to attempt 3, but I only managed to do it once, and it fell over before I could take the shot :< I don’t think 3 would fit in the frame, anyway, without going to portrait orientation.#

The small tower was built with some very small tweezers. You can see more of this set here.