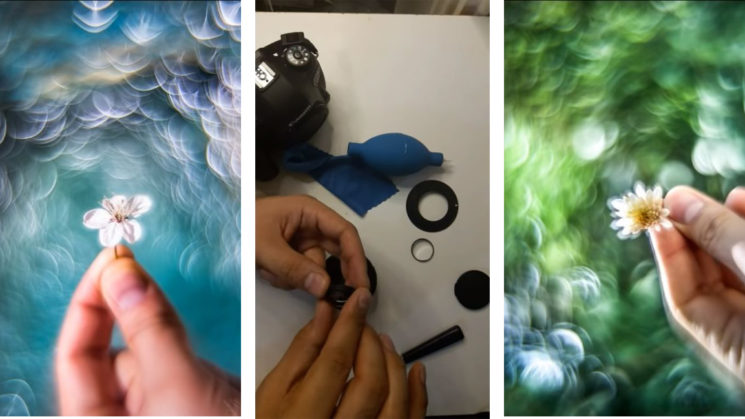 Thanks to lens mount adapters, you can play with vintage lenses on modern cameras and get some of their bokeh goodness in digital photos. Iranian photographer Alireza Rostami made a simple modification to one of these vintage lenses. By flipping a single optical element, he has created “magic bokeh” which adds a dreamy, unique feeling to images. In this video, he shares a process and a couple of sample photos he took after modifying the lens.

For this modification, Alireza used a Zenit MC Zenitar 50mm f/2 lens. He opened the lens and took out the optical elements, reversed just one, and put the others back in place as they were. He added an M42 to Canon EF lens adapter so he could pair the lens with his Canon EOS 6D. Here are some of the photos he took with the modified lens:

Modifications like this can produce unique results with other vintage lenses as well. For example, Mathieu Stern modified a MIR-1B. He flipped the front element and got “bokeh explosion.”

You can find a Zenit MC Zenitar 50mm f/2 for around $70 on eBay, although I’ve found one that costs half as much. The process of lens modification seems pretty simple. But, even if you mess something up, at least you didn’t ruin an expensive lens. So, I guess this is worth the shot (no pun intended). It’s probably not an effect you’d use for every photo you take, but it could have its purpose in portraits or macro shots.

If you’d like to see more of Alireza’s work, head over to his Instagram and 500px page.

[A “Magic Bokeh” Lens Modification via No Film School]