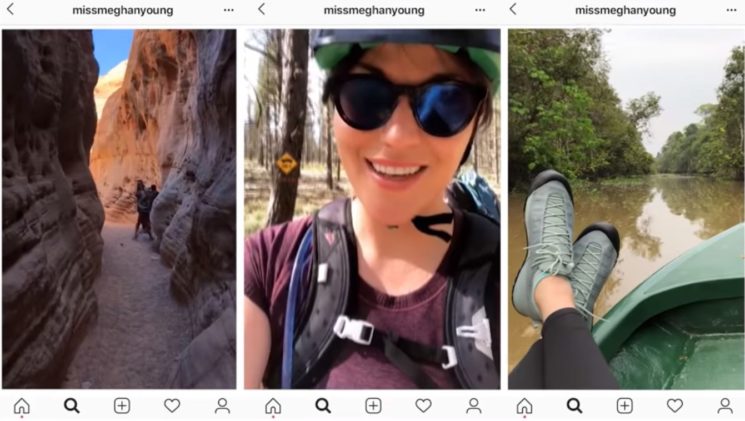 Influencers are a growing group on Instagram. So popular, that they may even get a special type of accounts. Still, many people don’t know what exactly influencers do, and it may even seem like they don’t do anything.

Meghan Young makes a living from climbing the mountains and she earns up to $100,000 a year by posting photos and videos of her adventures to Instagram. Sounds like a dream come true, but is it really like that? Just like any job, being an influencer has its downsides. And in this video from Bloomberg, you’ll get to see what it all looks like.

Meghan’s story began when she was in law school. Mountaineering was a way to wind down, and she would post photos of her adventures on Instagram. After a while, she got her first offers for collaboration, and it all began to unravel. After a while, quit the law career and became a full-time influencer.

Basically, Meghan goes to adventures, takes photos and shares them on social media. Companies pay her to endorse their products, and this is how she makes a living. There are different kinds of companies that pay her: technical gear, clothes, food… She can make between 15,000 and over 100,000 a year from promoted posts. For example, she earns $200+ per day for posting a story to her feed. A post on the feed goes from $1,500 and up per a single post. Sounds great, doesn’t it?

While there are the upsides of being an influencer, there definitely are many downsides, too. First of all, she uses her phone a lot, checking stats and making sure that people are liking her posts, commenting and following her work. It’s a constant pressure to keep the audience engaged. Also, the stats are important for an influencer, and Meghan used to check them all the time. However, she realized that it was making her feel exhausted, and she stopped being obsessive about it.

Sadly, there are often nasty messages and hateful comments she receives on Instagram. Meghan says that blocks these people, but she’s a real person with real feelings after all, so this still affects her. Finally, the adventures themselves are sometimes not only sunshine and roses. They can get difficult, dangerous and pretty scary sometimes.

In the video, Aki Ito of Bloomberg follows Meghan on one of her mountaineering adventures. They start early; it’s cold and snowing, and they arrive at the camping site 4 hours behind schedule. Things don’t really go as planned, they spend the night in the cold, but they wake up to a beautiful view and Meghan manages to take some photos for a potential sponsorship deal.

As you’ll see in the video, being an Instagram influencer is a job like any other, with its upsides and downsides. It has many advantages, but it’s not free from stressful and difficult moments. It’s one of the modern jobs that may change over time, as social networks become less popular. Who knows what the future will bring, but it’s interesting to see and learn about the jobs we couldn’t have imagined some 10-20 years ago.

[Inside the Life of an Instagram Star via FStoppers]