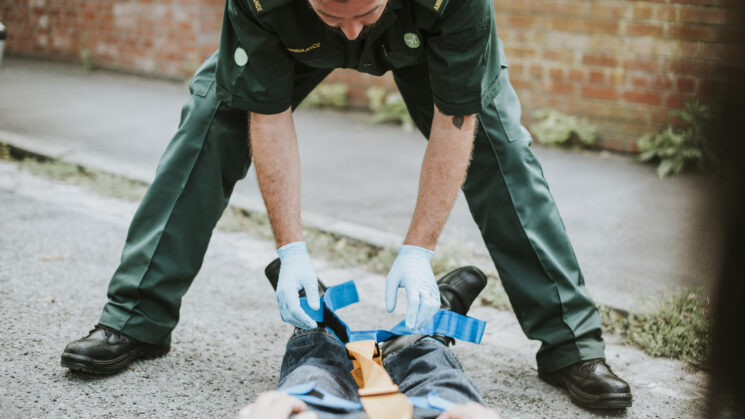 When you’re taking a photo in a tricky location, lose your focus for just a moment and it can lead to a disaster.

A former pro surfer Mike Lambresi recently had an accident that almost had him killed. While trying to take a photo, he lost his footing and fell. As a result, he suffered terrible injuries that may even cost him his foot.

Mike was walking by the beach last month, taking some photos along the way. He approached a beachside cliff and climbed up in an attempt to get a different perspective. Judging from the photos of the location, it’s not a tall cliff – only a couple of rocks. However, it was enough for an accident that ended in terrible injuries.

Only a moment is enough to slip and fall down, which is what happened to Mike. Some sources say that he was trying to take a selfie, but from his Instagram post, it sounds that he was trying to take a landscape photo. Either way, he did neither: he slipped, fell down, and hurt both his legs. He lost his left heel, but his right leg also suffered significant injures and required stitching up in various places. After informing his friends and followers about the accident, Mike shared some photos of the injuries and updates on the progress. I’ll link it for you, but remember – it’s not for the faint-hearted.

Mike posted the latest update two weeks ago, saying that he was “in agony” with pain and medications. He has undergone three surgeries so far, and it’s still not known whether doctors have managed to save his foot. But at least he’s lived to tell the story, and we at DIYP wish him a speedy recovery.

This story reminded me of all those unfortunate events I’ve witnessed, reported about, or heard of. There are so many people who lost their lives over a selfie or while chasing a different perspective for a photo. You may remember that acquaintance of mine who fell into sewage water in the middle of winter because “he would do anything for a shot.” Thankfully, he wasn’t injured, just cold and smelly.

Anyways, what I’m trying to tell you is that you don’t have to climb a tall cliff to get injured. All of us can get a little too focused on getting the shot, so we don’t notice the world around us anymore. Because of that, we may not notice the potential dangers, either. I want to remind you to always be cautious, even if you’re in a seemingly harmless place. Practice mindfulness, become aware of your surroundings and check your position and footing before you start searching for that perfect shot.

This photographer is addicted to life-risking Lava