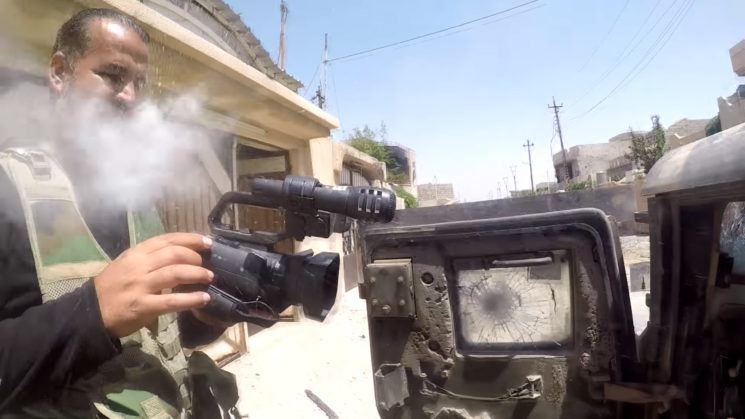 There’s never really been any doubt that GoPro cameras are built pretty tough. Just how tough is often tested. But I never thought I’d hear about one actually stopping a bullet and potentially saving a life. Iraqi journalist Amma Alwaely probably never expected to be the one experiencing it, either, but that seems to have been exactly what happened.

Digital Trends reports that on May 13th, Alwaely was covering the Iraqi troops attempts to recover the city of Mosul from ISIS. A sniper took aim at Alwaely and fired. The bullet is obviously too fast for the camera to pick up, but this video shows the impact of that bullet hitting the GoPro on his chest.

The incident was recorded by fellow journalist, Howen Holdaway.

The explosion had smashed the camera, spraying plastic into [Alwaely’s] face and cutting his lip.

I knew immediately, if it had not hit the camera, or [had] been a few inches to the right, it would have hit his heart, and [been] fatal.

The GoPro didn’t manage to survive the impact of the shot. So, needless to say, we’ll probably never see footage from the GoPro itself. We don’t even know if it was recording at the time anyway. This was an older model GoPro that still used an external housing for protection, not the GoPro Hero 5 released last year.

This isn’t the first time a camera has saved a photographer’s life from a bullet. Don McCullin was famously saved from a bullet by his Nikon F in 1968. But the Nikon F is a mechanical monster of a camera. It’s difficult to imagine that a mostly plastic camera like a GoPro would ever be able to do the same.

Even if it was a one time fluke, it’s amazing that it was able to do it at all.