“What war do you wish you could photograph?” So begins the commercial for the latest instalment of Call of Duty: Vanguard which will be released in a few days by Activision. The commercial has done what it set out to do and has brought much attention, particularly from the photography world. The game itself was created in 2003 and is a well known first-person shooter game that started out based on World War II. What is different with the latest update is the inclusion of a war photographer mode, where players can run around taking screenshots rather than shooting guns.

This version of the game is going for extreme realism, that much is clear from the commercial. In the video we see two war photographers (Sebastiano Piccolomini and Alex Potter) who have worked in real-life situations in the Middle East and Afghanistan moving around a virtual space, using a type of screen as a 360-degree viewer. They appear to be fully immersed, although not to the degree that a virtual reality headset would add. At the end of the game they hold prints of the images they have captured, and they do indeed look very convincing. I remember early versions of the game looking decidedly unreal when my student flatmates would play it, but is this new version so realistic it’s problematic?

There are so many things to unpack here. Does hyper-reality in video games, particularly in VR type games actually affect the person playing it in a negative way? It has long been known that the US military uses video games not just in training but in recruitment as well, and it has also been reported that warlike video games can trigger PTSD symptoms in military veterans. The arguments for and against these types of games have been around as long as the games themselves, and most people who grow up playing them don’t turn to violence. Rather than analysing the pros and cons of first-shooter games, I’m more interested in considering this new angle of the war photographer mode and what it means for photojournalism in general.

On the one hand, it should be a step forward in the right direction for anti-gun campaigners and pacifists. The gamers are now shooting images rather than bullets. But the question remains: is it trivialising the horrors of war, turning it into little more than a game of Harry Potter’s Quidditch? If the game feels real to actual war journalists then that also bothers me. Would I really want my teenaged nephews playing this game? Sure, it has an 18 age restriction on it, but we all know that younger teens will more than likely be playing it. On the other hand, could it fuel interest in a career as a photojournalist? Perhaps, and is that a bad thing? It’s a well respected and necessary career, though not an easy one, and certainly not for the faint-hearted.

One commenter suggested that this game was no different from the many Hollywood movies that glorify war. I tend to disagree. There is a sense of voyeurism with this game that you don’t get with a movie. A movie tells a story. War stories generally are tales of brotherhood, sacrifice, heroism and bravery against all odds. They are largely stories of humanity, told against the backdrop of war. Real war photographers talk of these same moments, and the best manage to capture these stories of humanity in a single image. Their images neither trivialise nor glorify war, but seek to show events as they happen, drawing empathy for the subjects. Many photojournalists tell stories of the moments after a photograph was taken, where they do in fact help innocent people, and often do feel deeply affected by what they are witnessing. The famous image commonly known as Napalm Girl taken by Nick Ut during the Vietnam war is a great example of this. After taking the photograph he then doused the children with water and drove them to a hospital to be treated for their wounds. There is little of that side of photojournalism apparent in this game.

Not being an avid gamer myself, I spoke to a few friends who had enjoyed playing video games like Call of Duty, at least in their younger years. Their response was interesting. One friend suggested that the lure of such games is not the war part, nor the shooting part, but unsurprisingly the game side of things. You have a mission, you have a goal, it depends on skill and you have an allotted time and number of lives to complete the mission and solve problems. Trying to mimic the realities of war was definitely not high up there on their enjoyment factor. Their point of view was that there seemed to be little point in wandering around a war zone taking photographs, a little like being a virtual tourist. They thought the whole concept was essentially tasteless and devalued the very thing that photojournalists are setting out to achieve, ie. to promote an empathic response. 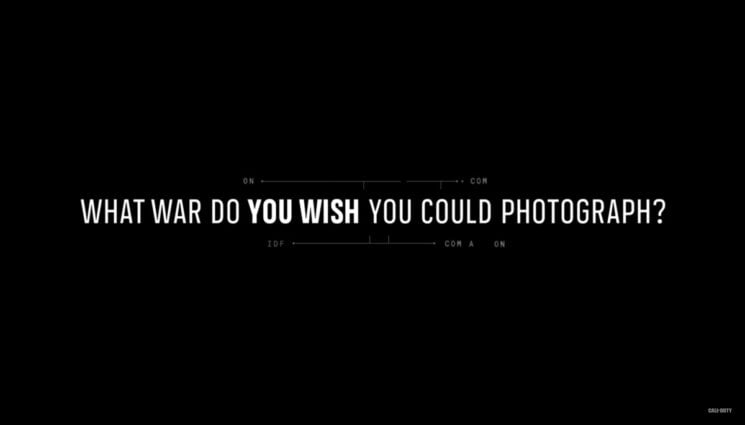 The other interesting aspect that demands conversation was a report that Call of Duty, in its effort to create a more immersive experience and better game, has actually distorted historical facts and included several “what if” scenarios and anachronisms. It’s one thing if the lasers on the guns aren’t quite accurate, but another if they start touting the Russians as incompetent buffoons and once again, as the USA swooping in and winning battles that they didn’t. The truth evidently is not exciting enough, and with today’s factual fluidity online and a staggering number of Holocaust deniers, touting a game as historically realistic when it has alternate facts won’t exactly help in this matter. I guess they do say at the end of the commercial that it’s “World War Two like you’ve never seen before”. They aren’t wrong there.

So back to that original question: Which war do you wish you could photograph? The answer for me is none of them.