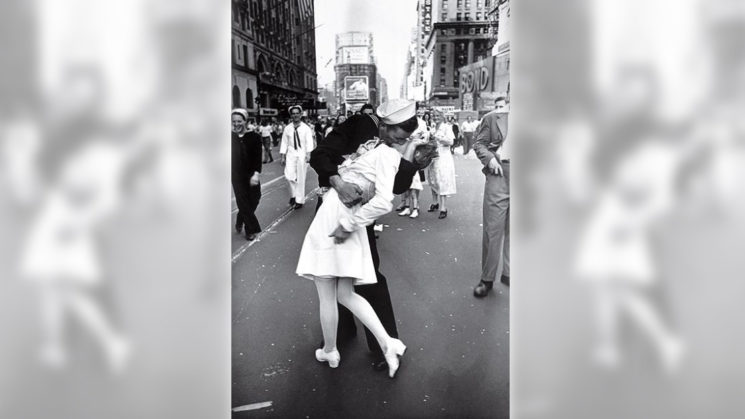 George Mendonsa, the “kissing sailor” from Alfred Eisenstaedt’s famous photo, died on Sunday at the age of 95. Mendonsa was photographed kissing a nurse on 14 August 1945 during the celebration of the end of the Second World War. The photo was published in Life magazine and it became one of the most influential images of all time.

Mendonsa’s daughter, Sharon Molleur, confirmed her father’s death to the Providence Journal. She said that her father fell and had a seizure on Sunday morning at an assisted living facility in Middletown, Rhode Island. He lived there with his wife of 70 years, and died only two days before his 96th birthday. He is survived by his wife, a daughter and a son.

We all know Mendonsa from the iconic image V-J Day in Times Square. Life magazine photographer Alfred Eisenstaedt captured this moment of excitement on Times Square as people were celebrating the war’s end. The woman was Greta Zimmer Friedman, a dental assistant wearing a nurse uniform. She and Mendonsa were perfect strangers, and as he recalled, he was simply overwhelmed by the excitement.

“It was the moment. You come back from the Pacific, and finally, the war ends,” he said in an interview with CBS News back in 2012. “The excitement of the war being over, plus I had a few drinks… So when I saw the nurse, I grabbed her, and I kissed her.” Friedman died on 8 September 2016 at the age of 92.