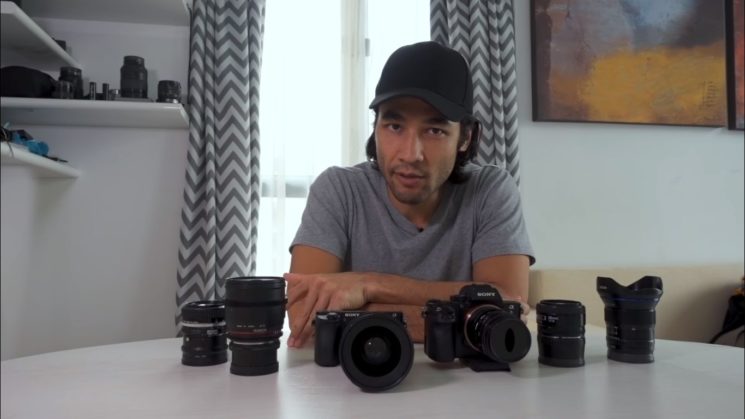 Vintage manual lenses can give you splendid results in both photography and filmmaking. There are some real gems among them, with exquisite sharpness or crazy bokeh. Filmmaker Brandon Li likes to use a couple of vintage lenses for his videos, and he shares four of his favorite ones and the reasons why he loves using them.

Vintage lenses have some imperfections that Brandon sees as more cinematic. He says it’s not easy to put it in words, but it has something to do with a little bit of softness, lens flare, and aberration.

Brandon uses these lenses on Sony a7sii and Sony a6500. Since the cameras he uses have stabilization, it’s not necessary for the lenses to have it, so shooting with vintage lenses doesn’t pose a problem.

The lens Brandon uses most often is Helios 44-2 58mm F2, an old Russian lens with characteristic swirly bokeh. Bokeh is the number one reason to use this lens, but it’s not the only one. It’s also pretty sharp at f/2 and creates nice lens flare. You can use an Anamorfaux oval filter on it to shoot fake anamorphic footage. It’s also super-cheap (around $50). If you plan to buy it, keep in mind that not all Helios lenses have the swirly bokeh. So, ask for some sample images before cashing out.

The next lens Brandon introduces is Laowa 15mm f/2. It’s a full frame lens, and it’s very lightweight. Brandon points out that it has very low distortion so you can shoot things like architecture and straight lines. It’s also good for vlogging, but you need to preset the focus and try to remain at the same distance from the lens. Brandon points out that this lens fairly sharp at f/2, although some users wouldn’t agree with him.

Nikkor AF 35mm f/2 has AF on Nikon cameras, but with other cameras and adapters without electronic contact, you’ll have to use it as a manual lens. Brandon admits it’s not remarkable: it has a plastic body which feels cheap, the bokeh isn’t exceptional… But, this lens is extremely lightweight, which is Brandon’s main reason for using it.

The last lens Brandon presents is Rokinon 85mm t/1.5 cine lens. He admits he doesn’t use it that often because he generally doesn’t want the telephoto look in his videos. Also, when he does want it, he wants a manageable depth of field. Still, this lens is very flattering on faces and it gives a great look with the Anamorfaux adapter, which is why Brandon uses it from time to time for certain shots.

How to focus manual lenses on a gimbal

Since all these lenses are manual, Brandon shares some tips for keeping the moving subject in focus while shooting on a gimbal. He prefocuses the shots before he starts moving with the gimbal. When he and the subject start walking, he tries to keep the same distance between the subject and the camera. He does it either by judging the framing in the viewfinder or by looking at his and subject’s feet and trying to keep them at the same distance.

The better way to pull this off is to use a dedicated focus puller, use a radio-controlled follow focus with an external monitor and a wireless video transmitter. But, if you can’t or don’t want to carry so much extra gear, then the trick above should do as well. Sometimes it takes several takes, but the end result is worth it.

[My favorite manual and vintage lenses for video via ISO 1200]

How manual-focus and vintage lenses made me a better photographer

Shooting the same model with three vintage lenses under $100