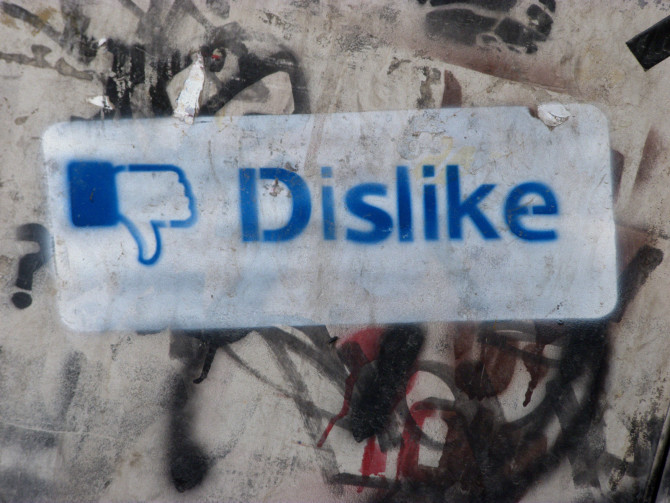 If you use Facebook, you’re not going to be happy reading this post. If you also upload your work to the social media, you’re REALLY not going to like this.

Corey Ann Balazowich of Photo Stealers reports that the worrying message that goes round every once in a while claiming that Facebook’s new Terms of Use strip photographers of any rights regarding uploaded content might not be a hoax after all.

An email she recently received from a Facebook representative states that the company owns any and all content once it is uploaded to their website, and that basically anybody can use it as they wish. They may even take credit for your copyrighted photos.

The email was sent to Corey during her latest correspondence with Facebook regarding her Photo Stealers page, but we’ll get back to the reason for that in a bit.

After checking the matter for the past two weeks, a Facebook Sales Representative responded to Corey with a very unsettling email.

This is the part you want to pay attention to:

“I understand that you are trying to protect other photographers and consumers by calling out others who are posting photos copyrighted by others, however, once something is posted or uploaded onto Facebook it becomes Facebook’s property. So if the original photographer uploaded the photo first onto Facebook and then others have taken it from there and uploaded it to their pages or profiles, this is legal and within policy, there’s nothing I can do about it unfortunately even if they are taking credit for the photos”.

In order to clarify that she correctly understood the email, Corey responded asking if any photo she uploads to Facebook “is now Facebook’s property and anyone can steal it and so long as they are using Facebook they can do whatever they want with my copyrighted works?”

The rep sent in her reply a link to the website’s policies and highlighted a couple of sentences, below: 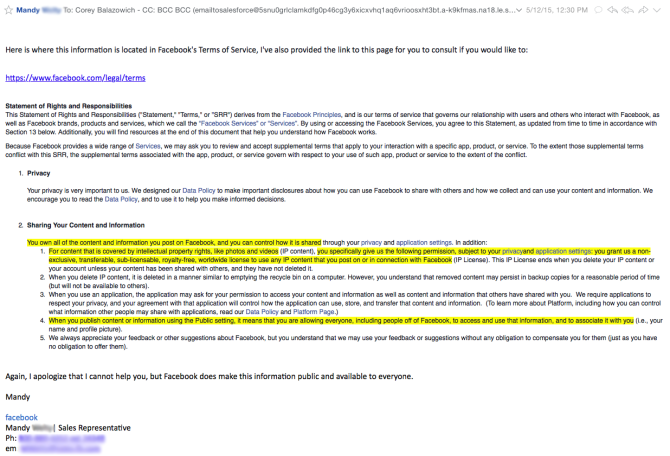 The highlighted sentences state the following:

The second email basically states that you own the rights to your photos but you give Facebook permission to do whatever they like with them. It also says that others may use your photos and to associate them with you.

This is somewhat relaxing as it contradicts some of what was said in the previous email, but is still enough to keep some photographers up at night.

The third sentence is very vague and my guess is that it was written that way on purpose. It’s a clause that reduces the company’s responsibility and workload, that will probably be changed once it is challenged (or threatened to be) in court.

So while the terms might not be as terrible as initially stated, the fact that an official representative thinks those are the rules is a major problem. To make things even worse, the rep said that she had consulted her supervisor and Facebook’s help center, which means they are all under the impression that Facebook actually owns your photos – and they enforce this incorrect policy.

You might have noticed that the first email stated that “If these people are attacking you for pointing out that others are taking credit for work that is not theirs then this could be technically considered a violation of the community standards – both what you’re doing and what these people are doing to you”.

So not only does Facebook allow your photos to be used freely by other members, it turns out that pointing a finger at people who “borrowed” other peoples’ photos is against the company’s rules.

This is the reason any post Corey makes on the Photo Stealers page leads to the content being deleted and her account restricted, and it was during her attempt to get the page back up that she received the above emails.

We’ve reached out to Facebook with several follow up questions regarding their policies and our rights as photographers and will post an update once they respond.

UPDATE: The emails sent to Corey created massive waves online and Facebook issued an official statement saying that the representative above was wrong:

In addition, we prohibit people from posting content that violates someone else’s intellectual property rights. If a rights owner believes that content on Facebook violates their rights, they may report it to us. Upon notice, we stand ready to respond including by removing the content from Facebook.”

It will be interesting to see if the mess this story stirred will cause Facebook to respond to copyright claims faster than they have been doing so far.

Dog Claims GoPro as His Own by Peeing On It