Shooting stable video of sailing from a moving boat has always been a near impossible task. Brushless motor gimbal stabilising rigs have become ubiquitous over the last two years or so. They have gotten to the point where they’re cheap enough and light enough that they are changing the way video of fast moving boats will be shot. 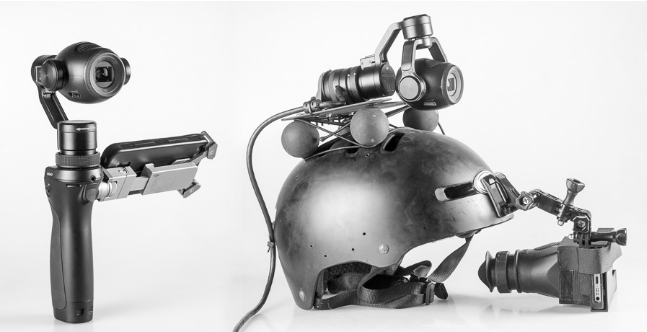 Starting with a DJI Osmo+ rig straight from the box the first immediately obvious problem was that I couldn’t easily read the iPhone screen to see the settings or to adjust focus while bouncing around on a small chase boat in bright sunlight.

The iPhone doesn’t need to be on the handle attachment, the camera and phone communicate by WiFi.
So my solution, add an SLR Video Loupe to the iPhone and bring the whole thing up to my eye.
I accomplished this by designing and 3D printing a mount that would hold the loupe the correct distance from my iPhone screen with a slot for the phone to slide into and a GoPro compatible mounting point so that GoPro brackets and mounts could be used to attach the viewer rig to a helmet.

Next issue to overcome was the bounce and vibrations the hand held camera footage was suffering from at speeds around 30 – 40 knots in even slight seas.

The gimbal/camera and handle are able to be separated so that pole extensions and other accessories can be added in between. I bought one of DJI’s Z axis accessories without properly reading the small print. “Not for extreme sports use” The Z axis would crash into its end stops in even a slight chop. I guess it was only intended as a means to take out the bounce from walking with the camera. 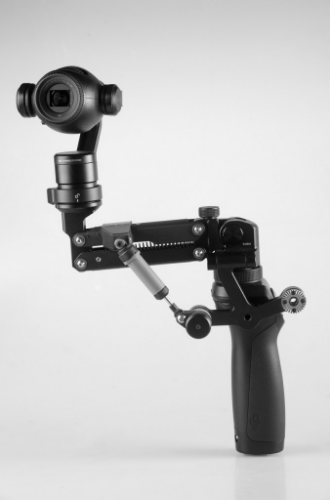 Back to work. Now I’m getting excellent steady footage. Here is some footage made with the hand held Osmo+ at full zoom with dampened Z-axis extension.

However, trying to shoot out of the left side of the chase boat while holding on with my left hand meant I was getting all crossed up. Also shooting for extended periods resulted in a tired right arm.

Initially I simply screwed the camera end of the cable to the top of my helmet and mounted the camera to that. Vibrations are back as an issue. Reintroduce the Z-axis contraption. Now it’s a little top heavy, windage is an issue and I’ve swapped sore shoulders for a sore neck.

What I really need is a beefed up version of the types of vibration reduction set ups common on many Drones. Base plate separated from camera by four rubber mounts. I tried a couple of different things but eventually settled on Squash balls. I added cross bracing with Bungy line as it was a bit wobbly.

Below is some sample footage alongside GoPro footage of the rig in action.

This was shot using the rig as it was one generation ago. I have since printed an L bracket to mount the gimbal in it’s horizontal mode as in the photo at the top of this page, rather than the standard vertical mode as can be seen in the above video.
There’s still obviously room for improvement. As we’re staying quite a distance away from the subject, the camera is at full zoom, including 2x digital zoom, so about the full frame equivalent of a 77mm lens.

Chris Cameron is an Event / PR / Advertising photographer with a heavy lean toward boats and the people who use them, be it for work, sport or pleasure. For more of his work, check out his website and follow him on Instagram and Twitter. This article was also published here and shared with permission.

How does Yuneec’s Typhoon ActionCam with 3-axis Gimbal Stack Up Against DJI’s Osmo?
« How a photographer creates “Pyramids in the Sky” using camera rotation and sunset
U.S. bans electronic devices on flights from 8 Muslim countries »