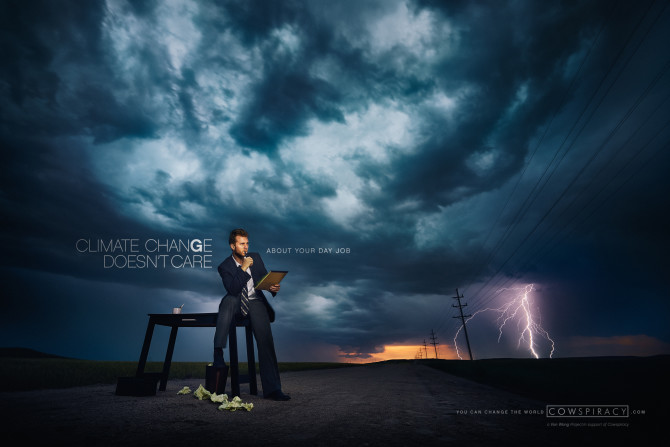 I remember chatting with Benjamin Von Wong on Facebook one day, and him inviting me to this Facebook group that would involve his next adventure. Months later, this story came across my desk and I had to jump on it and made sure I got to share it with all of you! If you are unfamiliar with Von Wong’s work I suggest you take a look at his site after you read about this project. What happens when you take creative minds like Benjamin Von Wong and Kelly DeLay, plus a crew of talented storm chasers, photographers, and a community of friends and fans, and send them out into the midwestern United States into some very strong storms?

Come out of that storm cellar and take a look at the imagery and the story behind it!

Ben had told me that he didn’t know if this project would bring him near my home state of North Dakota (Not much brings anyone here) because we do get the occasional tornado. I joined the Facebook group and already started to see Von Wong’s ideas start rolling because he was asking for some crazy things! We all know that he was going to be chasing storms. He was asking for grills, toilets, and anything crazy that may help his vision.

Von Wong is known for his elaborate imagery and is always the first to thank his team for the end result.

Not only had i never chased a storm in my life, I had also never planned a project around an uncontrollable force of nature. Clearly I was going to need to find some help.

Utilizing a storm chaser is always a good route to take when wanting to chase the storms of the midwest US. They are unpredictable and can be very dangerous! Most storm chasers are knowledgeable about meteorology and have just a little bit of crazy in them as well. Finding a photographer with 7 years of chasing experience was Von Wong’s… perfect storm! Kelly DeLay, a weather and environmental photographer, would be a wealth of knowledge and be able to tell Ben what it took to photograph storms and what to expect when out in the field. 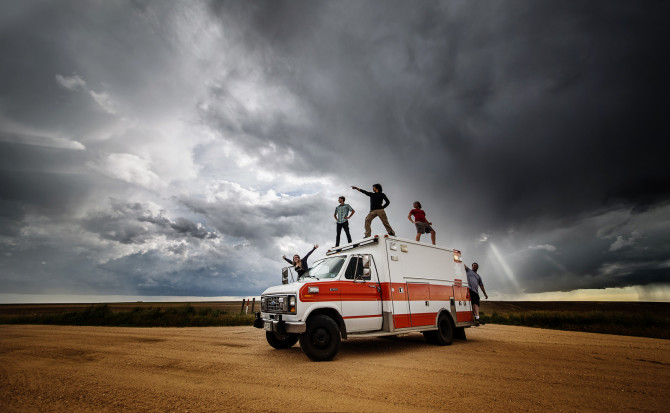 Ryan Zimmerman, a fan and photographer from Colorado offered to come with his ambulance. The team posed for a shot on the plains of the midwest.

We have all experienced storms. Mother nature loves to show off and loves to get some face time! During those moments in a storm when a lot of us are watching clouds form or heading down to the lowest floor in our house, this team Von Wong put together had 10-15 minutes to set up and tear down their shoot to get the shot. DeLay also made it known that there were no guarantees they would get the shots when out in the field.

Setup and teardown all in 15 minutes can be hectic especially when dealing with a $7,000 Broncolor Move Flash Pack.

I followed that Facebook group daily! It was always good to see that Ben was still asking for props meaning the storms had not gotten too close! When he had stated the adventure was done I was excited because I knew that whatever he had in store for us was going to be epic. Von Wong doesn’t disappoint.

The imagery from the adventure is everything I had hoped it to be and more. The other aspect of Von Wong that you get to know while following him is that as an artist he looks for ways to make a difference. Getting in front of these storms and seeing them first hand he said that it allowed him to “greatly increase my understanding of climate change by discovering documentaries like Conspiracy and how dire of a situation we find ourselves in.” I won’t dive into the issues with climate change but I do want to bring to attention that Von Wong wanted to make a difference by bringing to light this issue using his imagery.

Enough of me blabbering on with all of this text! Picture time! 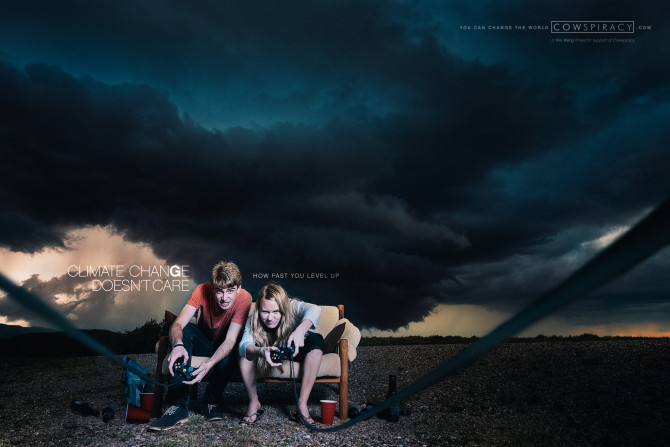 “Climate change doesn’t care | How fast you level up” 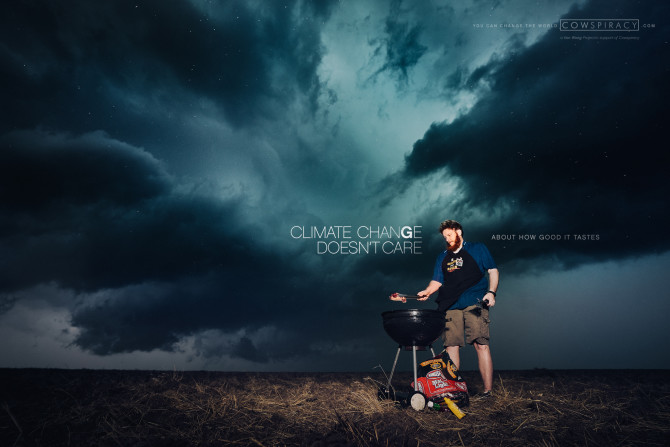 “Climate doesn’t care | about how good it tastes” 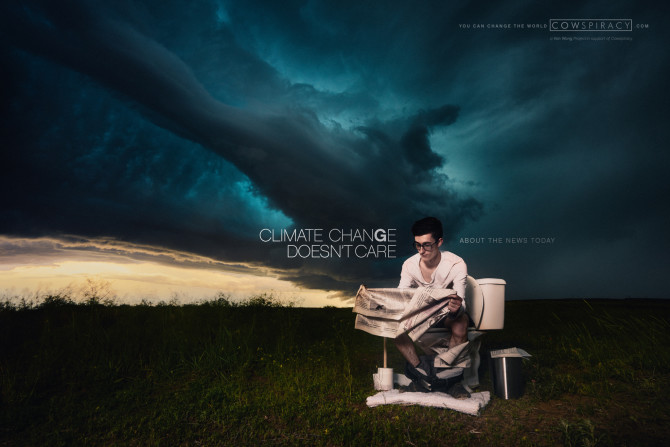 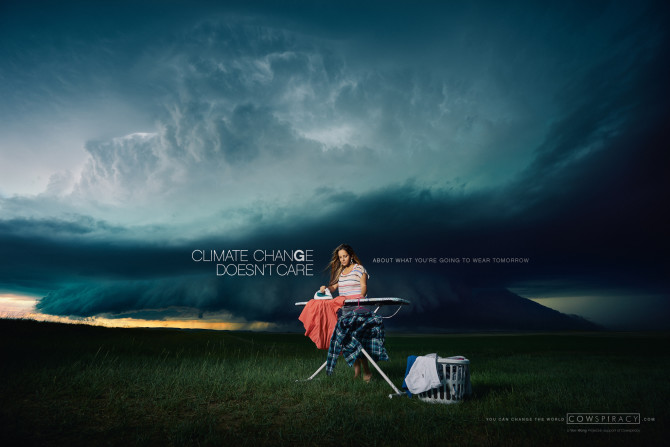 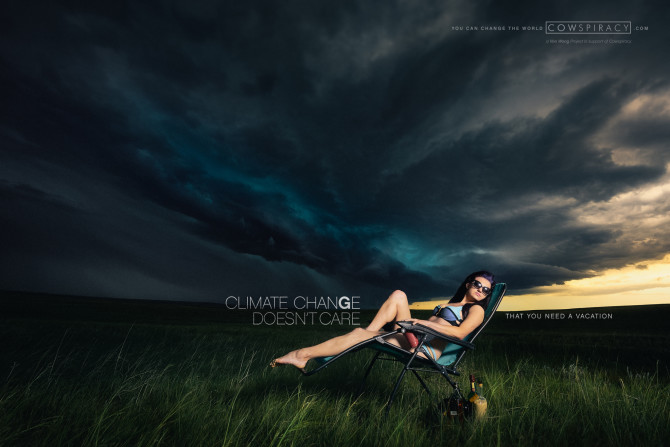 “Climate doesn’t care | that you need a vacation”

Now there are a couple more final images that Von Wong shares on his blog that are worth looking but I really wanted to share more behind the scene shots. 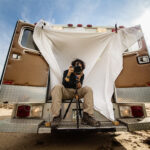 Von Wong used the ambulance to protect his gear and also act as a large soft box. 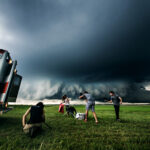 Von Wong taking the shot while the crew films 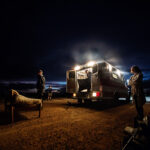 The ambulance was said to be quite useful transporting the props 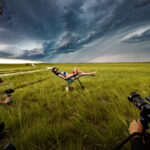 Von Wong getting the shot 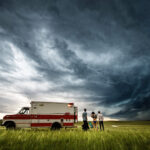 Setting up the shot

The ambulance wouldn’t have been my first choice of chasing vehicle but it looked to be the perfect vehicle to get the gear, props, and people where they needed to be to get the shot.

Below is the gear used to shoot the final images as well as the behind the scenes video. I bet no Phantom was flown into the storm :)

Following Von Wong for as long as I have, one tends to notice he knows his gear as well as knowing how to use it!

Broncolor made Ben a brand ambassador and even more importantly he uses the same tripod I use. Ok, that probably isn’t that important but the 3LT “Brian” is such a great tripod! Its always good to see gear get put to the test especially in environments such as a storm!

Here is a video with Von Wong talking about the project as well as showing some behind the scenes footage.

This Epic Storm Timelapse Will Make You Want To Get Close And Personal with A Storm
« Capture One Pro 9’s New Feature Set Looks to Take On Lightroom
Why Did It Change? »