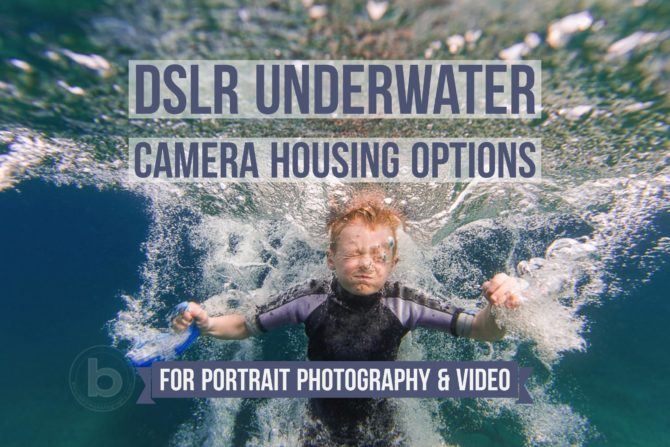 It’s mid-summer and I have been doing a lot of underwater portrait photography lately…which has started me thinking that it might finally be time to upgrade my current DSLR underwater camera housing.

I have been working with an inexpensive EWA Marine underwater DSLR camera housing for years (read my review here) – I love the simplicity of this housing, but I feel like I have reached a point where the limitations of the flat port are impacting the types of underwater photos that I can capture.

In this article, I will discuss a few of the options for DSLR users to take their camera underwater.

Before we get started, I think that it is important to note that in this article, I am talking about underwater portrait photography – not dive photography.

By portrait photography, I mean photos of people in and around the water, usually at relatively shallow depths, while dive photography is more sea life, wrecks, underwater landscapes and photos of other neoprene clad divers. 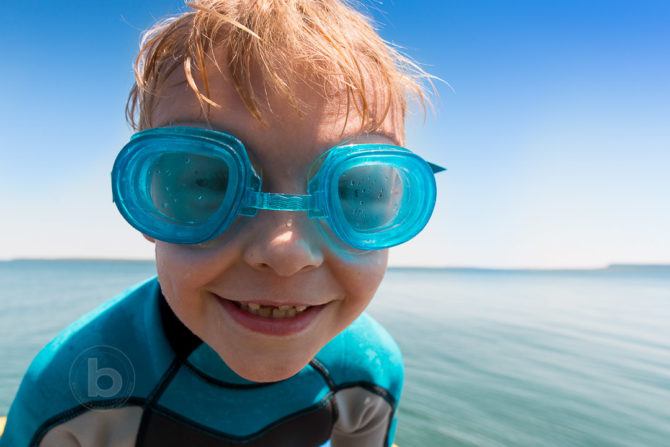 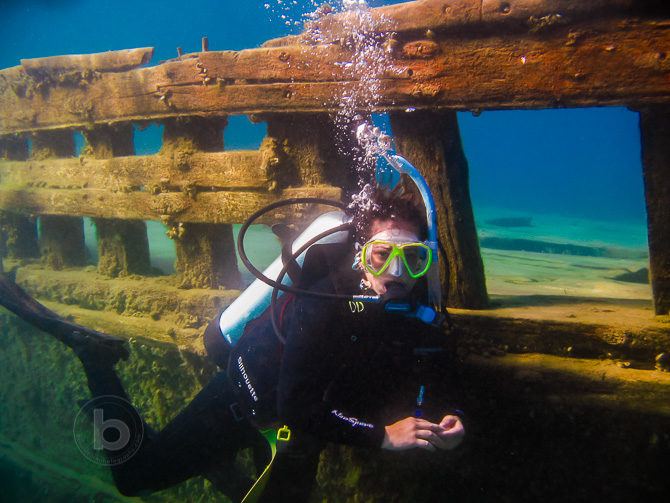 Most of my underwater portrait photography is ambient light, although I do use a set of home made DIY underwater strobe housings – but the setup is much different than the typical underwater dive strobe setup where the strobes are within arms length of the camera.

The single biggest limitation of a flat port underwater camera housing is the magnification that is introduced due to the optics of the angle of refraction of light as it travels through water and air. To put it simply, with a flat port everything looks 33% larger underwater.

While this might not sound like a big deal – it is a huge limitation when you consider the way light is absorbed by water. Reds are adsorbed first, followed by orange, yellow, green, blue, indigo and violet. This means that to get good color rendition underwater you need to be as close to your subject as possible – even a few feet makes a big difference.

Using wide angle lenses helps – but using a domed port gets you 33% closer.

In practical terms, it’s also a lot easier to see what you’re photographing when you are close. Every single time I begin an underwater shoot, I end up starting too close to my subject. We’re used to seeing a scene on land and that 33% magnification really throws you off when you’re gauging the composition of a scene.

Flat ports also introduce a significant amount of chromatic aberration and pincushion distortion. These imperfections can be managed in post, but a domed port largely eliminates them at capture.

You can clearly see the severe pincushion distortion in the following photo, and how it looks after a manual correction in Lightroom: 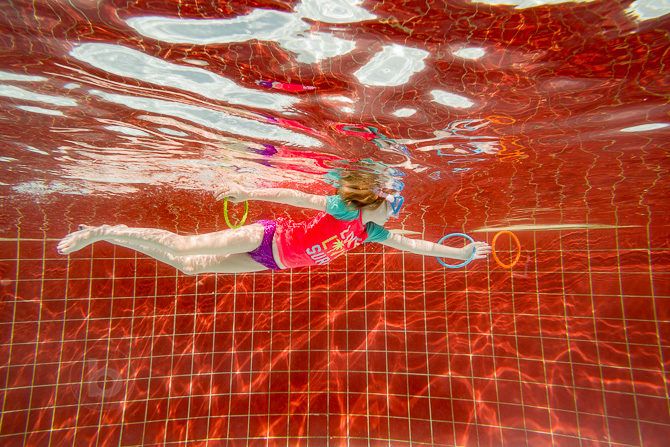 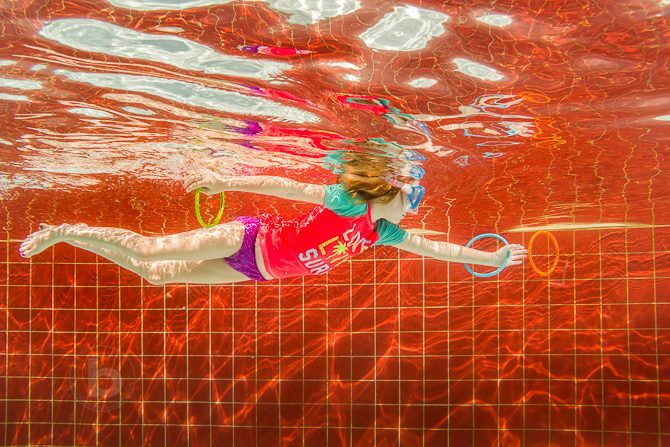 Finally, if you want to get as close as possible by using a fisheye lens, or an ultra wide lens with a convex front element, or if you want to capture over/under photos where the underwater portion is not magnified – you have to use a domed port.

If you’re not sure – the following photo illustrates the extreme differences in magnification due to a flat port housing, and the difference in color as light travels through just a few feet of water: 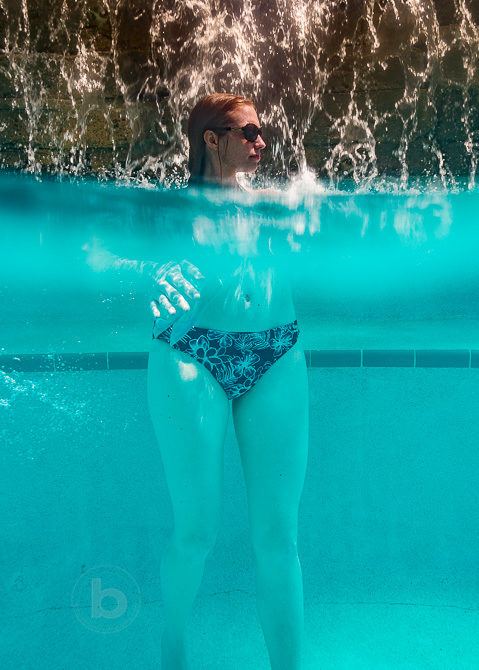 For the purpose of this article, I am looking at options for an affordable DSLR underwater camera housing for a Nikon D800 that can be used with a selection of lenses.

Dive photographers have a set of preferred lenses that work well for dive photography (and most are for cropped format cameras), but for my purposes, I am primarily interested in using the full format lenses that I already own for my regular day to day photography.

The Nikon 20mm f/1.8 is my favorite lens for underwater photography – it has a flat front element so it can be used with a standard screw on filter (and a flat port), it’s very sharp and wide enough for most underwater work.

I also occasionally use a Sigma ART 35mm f/1.4 underwater – for images where I don’t want a lot of wide angle distortion, changing to a 35mm makes a big difference, with the trade-off of having to be much further away. 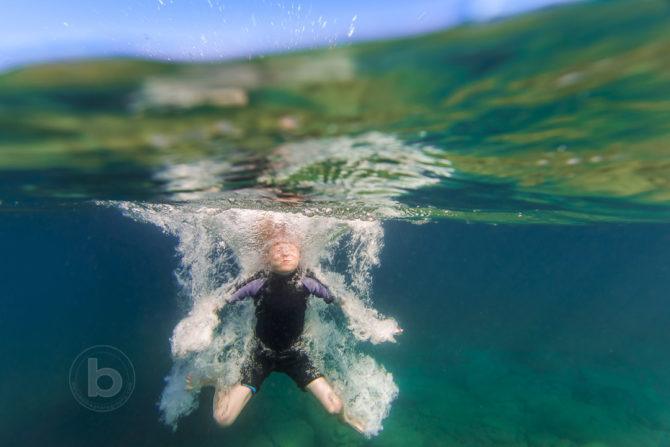 I have been using an EWA Marine U-BXP 100 underwater DSLR camera housing for my underwater and in-water photography for years. It’s never leaked – not once (and I’m not particularly careful with it) and its small and lightweight for travel. 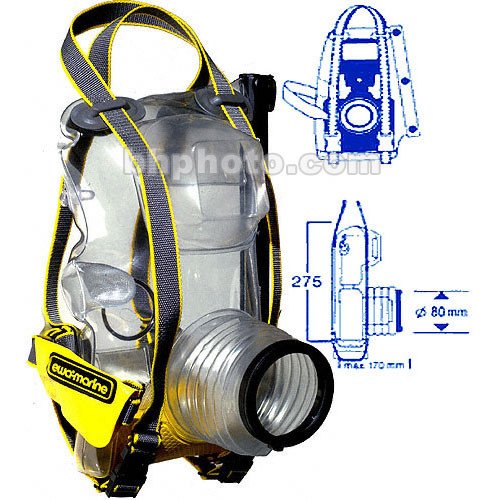 Technically you can access all of your camera’s controls while using an EWA Marine housing. In practice, it’s nearly impossible to do anything besides turn the camera on and off and press the shutter release – although with patience you can use the jog dials to change the white balance, ISO, aperture and shutter speed.

Cost effective and gets the job done. In my opinion, the best soft shell underwater housing on the market (Outex is another good option). Not compatible with fisheye or ultra wide angle lenses like the Nikon 14mm f/2.8 and Nikon 14-24mm f/2.8. No option for a domed port.

Meikon is a Hong Kong based manufacturer of aftermarket polycarbonate (plastic) hard shell underwater camera housings. There isn’t a lot of information available out there, but what I could find was mostly positive.

As far as internet photos go, their D800 underwater housing looks well made. 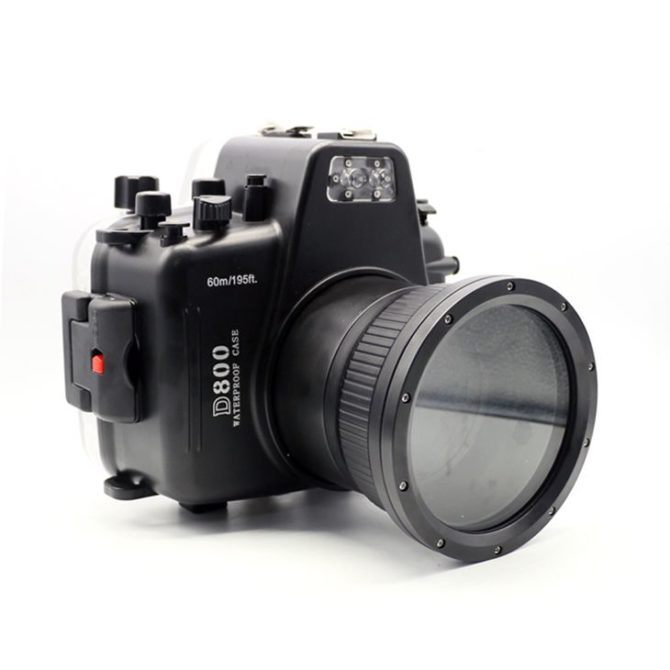 Most camera controls are accessible through the housing. No zoom or manual focus currently available.

Built in acrylic flat port. Meikon states that the port is interchangeable, but as of right now only a 105mm lens port is available.

$657 from Amazon – no current options for port or extension options.

Very cost effective for a hard shell camera housing. Unknown quality and reliability. Unknown lens compatibility. Not compatible with fisheye or ultra wide angle lenses like the Nikon 14mm f/2.8 and Nikon 14-24mm f/2.8. No option for a domed port.

Surf housings are designed to be used in and underwater, but near the surface only.

90% of the underwater photos that I take are within a few feet of the surface. I rarely go deeper than 10 feet (3m) and only occasionally to 30 feet (10m) so a surf housing would meet most of my requirements.

AquaTech recently released the Base series of entry level sport housings which offer a relatively affordable way to get your camera underwater, compared to the expense of hard shell dive housings. 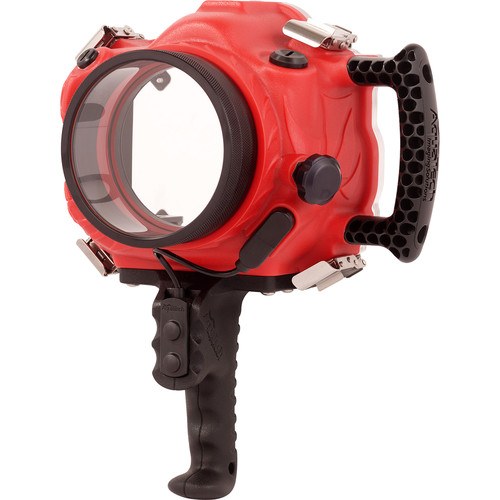 Shutter release and focus control only. Zoom is available with lens specific ports.

Cost effective for a hard shell camera housing. Domed port, compatible with most lenses including lenses with a convex front element (with the purchase of additional extensions). No in-water camera control. Limited to a depth of 33 feet or less – and five minutes or less below 15 feet.

Note: AquaTech also offers a pro version of this housing that offers underwater control of image review and the camera’s menu system to change settings (but not many of the physical buttons or jog dials). $1885 from B&H for a total cost of all components of $2770. 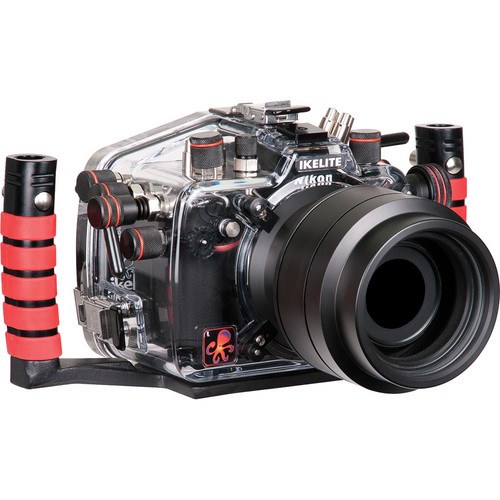 Almost all camera controls are available underwater – including direct control of ISO, aperture and shutter speed and white balance via the camera’s physical buttons and jog dials.

I also want to mention that there is an active second hand market for Ikelite housings and components – so you might be able to find used components if you are trying to match an older camera (like the D800) to a housing, and if you upgrade your DSLR, chances are you will be able to sell your housing used.

Aquatica, Sea & Sea and Subal offer professional grade dive housings for DSLR cameras. These housings are milled aluminum, not plastic and offer a wide selection of professional level accessories. In this article I am going to look at an Aquatica housing. 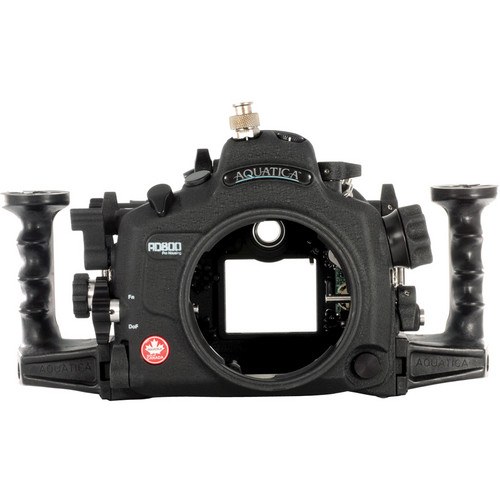 Almost all camera controls are available underwater – including direct control of ISO, aperture and shutter speed and white balance via the camera’s physical buttons and jog dials.

Ports are available for compatibility with most wide angle prime lenses and wide to medium zoom lenses. With the 8″ dome port the Nikon 20mm f/1.8, Nikon 14mm f/2.8, Nikon 14-24mm f/2.8 and Nikon 16mm fisheye are all compatible. No prime lenses longer than 28mm are listed in the port compatibility charts. 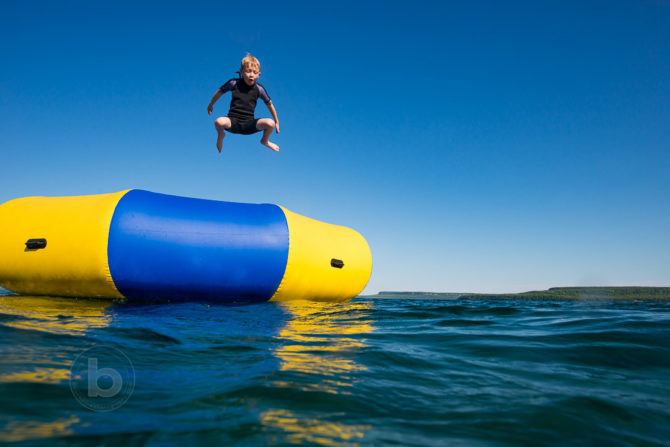 For most in water and underwater portrait scenarios these housings are more than adequate – although the lack of a domed port does have limitations.

I always set the settings on my camera before putting it in the housing, so I don’t need to access very many controls while in the water.

However, conditions change very rapidly underwater – just a few feet in depth or a change in direction can require drastically different settings.

Being able to easily change ISO, aperture, shutter speed and set a custom white balance are key considerations. So is the ability to review and zoom in on images underwater – I often can’t tell if I have the shot or not until I zoom in to confirm focus and exposure.

What Underwater Camera Housing Would You Choose?

I think the AquaTech surf housings and the Ikelite dive housing stand out as the most economical options for an underwater camera housing if you really need a domed port.

For my purposes, a professional grade dive housing is overkill – I can’t justify the cost for a camera that will be obsolete in a few years.

Cost wise, the AquaTech Base system is the most economical option by a wide margin, with a total cost of around $1880 for the housing, domed port and a selection of port extensions. This would be a great step up from a flat port soft shell housing.

However, I know that over time I would be frustrated with the lack of camera controls available with the Base series housings – which leaves either an AquaTech Elite housing or an Ikelite housing.

Surf / sport housings are really designed for just that – fast paced, dynamic environments where you need to work quick and get the shot.

Dive housings are much more suited to a slower pace.

The Ikelite system is more capable – it is suitable for dive depths and has better access to more camera controls.

Because of this I decided that the Ikelite underwater camera housing would best suit my style of photography.

It took a bit of searching, but I was able to find a used Ikelite housing at Reef Photo & Video in Florida (highly recommended, great customer service) and a used 8″ dome port and port extensions from B&H – so in total I spent around $2000 to get a dive rated housing with full camera controls for roughly the price of the AquaTech Base system. 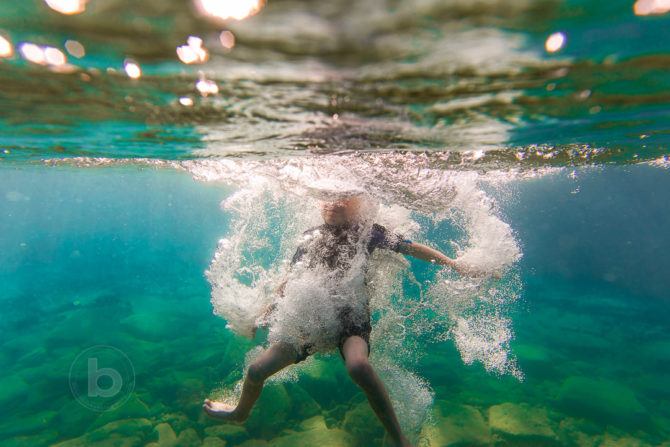 What underwater camera housing would you choose? Why?

If you already have an underwater camera housing – what housing do you use?