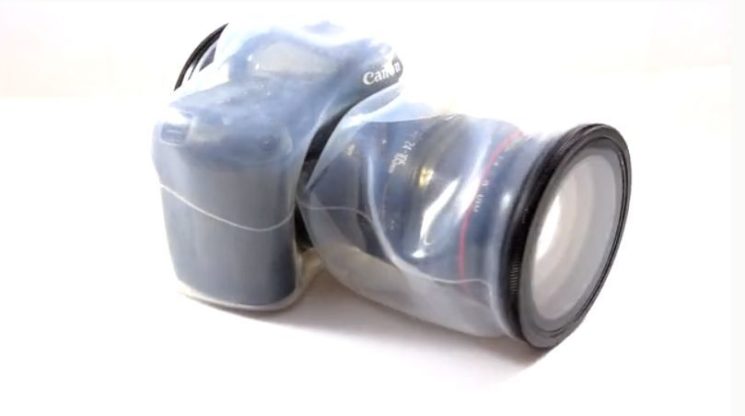 Outex has launched a new underwater housing on Kickstarter. Unlike their previous models, this time they offer a completely transparent cover, and it seems like a really handy piece of gear. It’s light-weight and modular, so the makers promise a versatile and travel-friendly cover. It’s also malleable and adaptable, so you have the complete tactile control over the camera.

A couple of years ago, Outex launched their malleable, modular cover, also through Kickstarter. But the thing with this new model is transparency. It lets you see the entire camera, in addition to the tactile control of the buttons and lens.

Thanks to its light weight and softness, this cover is travel-friendly and you can pack it anywhere. The makers promise professional result and a strong and elastic cover that will keep your gear safe. You can use it at the depth of up to 10 meters (about 33 feet).

In comparison to the previous models, the clear Outex is described as stronger and more elastic. Thus, it should last you longer and stay strong in different environments. If you already have Outex gear, you should know that the new clear cover is backward compatible with it. Also, the makers promise modular design that works with tripods, lighting, domes and tethering.

The project is launched on Kickstarter, and it’s aimed at funding their most popular Cover 110 size. They promise compatibility with “virtually any camera in the market,” both DSLR and mirrorless.  The stretch goals could deliver optimized covers for small, compact, mirrorless cameras and large professional DSLRs “such as the family 1D/Canon or D5/Nikon.”  You can learn more about the dimensions for all of covers on Outex’s website.

One of the advantages the makers point out is the affordability. If you only need the cover, you’ll need to pledge $99 on Kickstarter. And if you are new to Outex and need an entire kit, it’s available for $375. Since the project runs on Kickstarter, you’ll get the housing if it gets successfully funded. And if this happens – the shipping begins in January 2018.

« Skylum Luminar 2018 now has native RAW support and a big performance boost
This guy destroys Instagram food photos for his friends, and their reactions are hilarious »