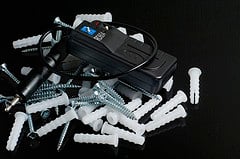 So you hacked yourself a gadget infinity flash radio slave and you are happy. You are shooting off camera flash and things work splendid. Actually, you really wanted a pair of pocketwizards, but it was 26 big ones Vs. 360, so it’s GI. Actually they work quite well. They worked quite well for a long while now. Then a crisis. Flash wont fire.

Camera clicks, but flash won’t fire. Darn! It was working just a second ago. What could have gone wrong? (Or in the words that the guys from the internet service hear 1000 times a day – I did not touch it.)

Here are three things to check before giving up on your cactus remotes. 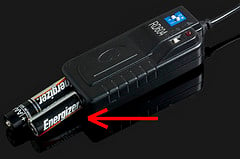 The receiver takes 2 AAA Batteries. But, this one should never really happen to you. Why because you should use a fresh receiver battery on every session.

The time penalty on switching a new bat on every session is really minor, and if you care about the environment use a battery charger and charge after each session. I personally dig the stuff from La Crosse, they are portable across countries, have heat/overcharge protection and as fast as a pop of a strobe, but that’s a matter for a different review.

I also keep a sealed pack of 2 Alkaline batteries in my bag. Just in case.

That said, this is the first thing I’d check receiver batteries. See on the left, this is how easy it is to replace them. 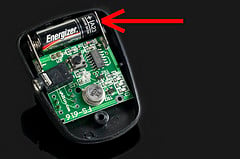 Still no luck? This is something a little of radar, but the transmitter also has a battery. And you do need to replace it every once in a while.

While = about a year.  So yes, you have to change the battery there too.

It’s no biggie, really. Although you’ll need a screwdriver for this.  (If you are reading this blog, I know you have a screwdriver). The transmitter takes one 23A 12V battery. See where it goes on the left.

It is usually the same battery that goes in to your car’s alarm remote. So if you are missing on the image of your life. Take that battery out and call for a cab. 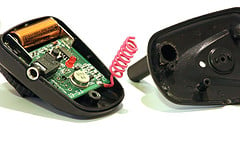 This last tip is the only one that requires a bit of preparation. And a solder.

The idea is simple, the internal antenna of the cactus trigger is, well, how to put it, short.

There is a great tutorial by makelessnoise on extending the range of the transmitter. Will the FCC approve this? I am not sure. Is it worth a try? Don’t tell ’em I sent you. Link on the image of the left for the full tutorial. The report dais it goes up till 60 meters. Not a PW yet, but a nice mod.

Your Cactus remotes must be different
from mine… my receivers don’t use 2 AAA batteries, but rather 1
short, stubby photo battery (CR-2). It pays to have an extra or two on
hand in case you forget to turn the receiver off after a shoot, as
keeping the power switch turned on drains them down to nothing
overnight.

I’d like to add one thing to check before ditching your poverty
wizard. One of my receivers stopped working about 6 months ago, and I
was ready to throw it away after it still wouldn’t work with a known
working battery. I decided to try triggering it with the battery cover
removed, and it worked just fine! The battery was being squashed
against the electronics inside, causing a bad connection somewhere.

So now I keep the battery cover off that receiver, and just use a
piece of gaffer’s tape to hold the battery in place. Works like a charm!

Make sure you don’t miss out on the next article – Register to the RSS feed or the newsletter. Follow me on Twitter: @diyphotography.