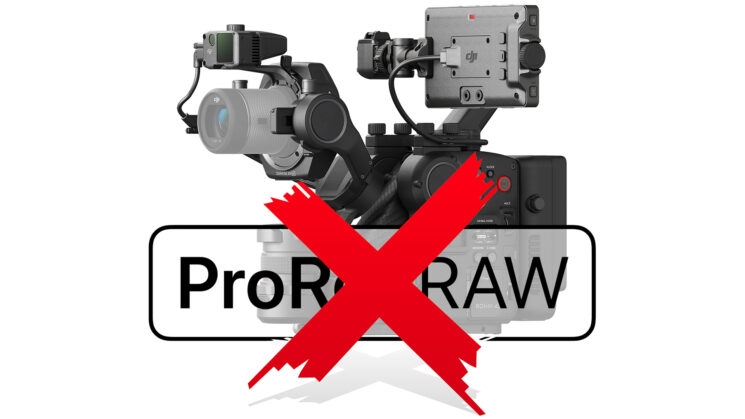 DJI has announced that its flagship cinema camera, the Ronin 4D 6K, has lost one of its biggest selling points; the ability to record ProRes RAW. Announced in October, the Ronin 4D 6K boasted internal recording of both ProRes and ProRes RAW, with frame rates up to 60fps. Now, though, that doesn’t appear to be happening.

Exactly why the ability is being removed is unclear. Y. M. Cinema suspects that it’s down to patents, however the DJI Ronin 4D (and the Zenmuse X7) are both still listed as official ProRes RAW products on the Apple website. Whatever the reason, it’s forced a $400 price reduction, reducing the Ronin 4D 6K combo down to $6,799. 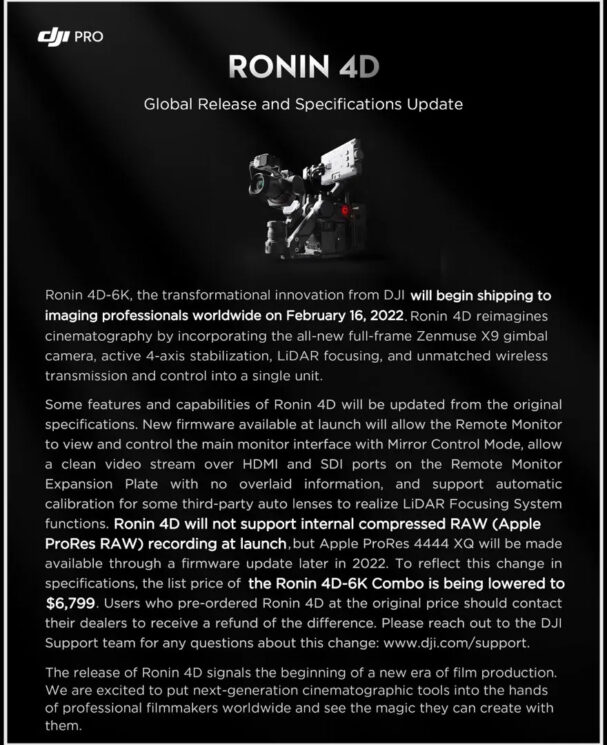 DJI says that the “Ronin 4D will not support internal compressed RAW (Apple ProRes RAW) recording at launch”, which initially suggests that it’s still coming but that it’ll be in a future firmware update. But then they immediately follow it up with a statement that Apple ProRes 4444 XQ is coming in a firmware update at some point in 2022 instead. The price drop also suggests that ProRes RAW might never be coming to this camera, too.

There’s no mention of the Cinema 4D 8K model in the announcement, which also suggests that they may simply be reserving it for the higher-spec and more expensive camera. But apparently not. According to an updated description of the camera on B&H, the 8K model won’t be receiving ProRes RAW, either.

Interestingly, while the Ronin 4D 6K price has dropped from $7,199 to $6,799 along with the announcement that it won’t get ProRes RAW, the price of the Ronin 4D 8K model remains at the same $11,499 price that was announced in October.

It’s a shame, and it’s unclear why these two cameras won’t be able to shoot ProRes RAW, especially given that the Ronin 4D is still listed as an approved ProRes RAW product on the Apple website, but it’s definitely going to put off a few sales to people who would have otherwise purchased this camera. While most of us don’t need ProRes raw in a camera, many who have the budget to spend this kind of money on something like the Ronin 4D do.

« Texas sues Meta over its shut-down facial recognition system, seeking over $500 billion
These are the most complained about cameras in the world »