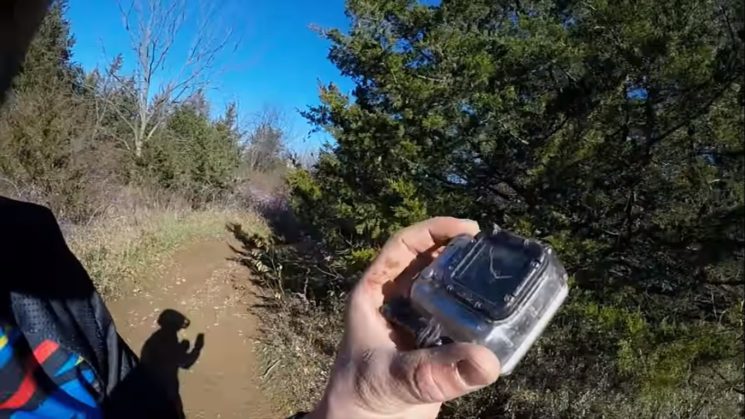 From time to time, we hear inspiring stories of lost cameras that crossed countries and seas and took years to be reunited with their owners. This interesting story comes from cyclist Aaron Chase, who found a lost GoPro while riding his bike. Four years later, Aaron found the owners and gave them back their memories.

Back in 2014, Aaron took his bike and his brand new GoPro HERO4 Black for a spin. While riding the bike, he took a crash. Fortunately, he didn’t have any serious injuries, and as he was shaking off the dirt he noticed something in the bushes nearby. It was a GoPro HERO3, with a cracked protective case and an empty battery. But he took it home, opened the files, and found a bunch of someone’s memories.

The first video shows a young boy who apparently received the camera for Christmas. From there on, there’s a bunch of his adventures, mostly with his parents and younger brother. After carefully examining the surroundings in the video and doing some research, Aaron managed to determine where the family lives. But then, the camera got buried again, this time in his “shuffle of life,” as Aaron puts it.

Fast forward to 2018, when Aaron has moved and found the GoPro Hero 3 again. And this time, he decided that he shouldn’t wait any longer. He drove to the family’s house and surprised them with the “blast from the past.” The boys explained that one of them had been wearing the camera on his chest when he hit a branch, which smashed the camera right off of him. They spent hours looking for it, but they were out of luck.

I think that it’s interesting that Aaron found the camera by accident – he fell off the bicycle, and there it was. I guess he could have returned it earlier, but I won’t judge, life does get messy sometimes. All in all, it’s an interesting story and I’m sure that the family appreciated seeing all those precious memories again.

« Community outraged after Australian hospital bans birth photographers from delivery rooms
This photographer uploaded a photo to a royalty-free stock site only to find it on over 500,000 Walmart products »