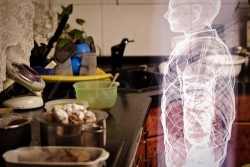 We have shown screen doing 3D extrusion before using both iPads and iPhones, but this is the first time we are featuring a tutorial that uses a 30″ monitor.

Photographer Zeke Adam (Flickr) agreed to share the secrets behind his non-existing man series, which basically light paints a non existing man. Duh… While Zeke uses high end software like 3D Studio Max and Cinema 4D, similar results can be achieved with free software (like Blender, which we featured before). Some of the steps are too complex to include in this tutorial, but we will refer you to the relevant places to learn or download shortcuts.

It’s all Zeke from now. 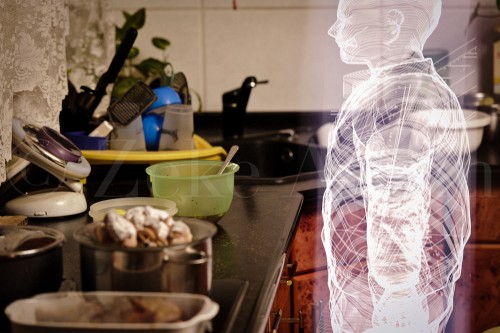 I always loved to create new things, things that before only existed in my mind, to create my own world. I loved photography since I was a child; I’m also a graphic designer and I always wanted to connect these two.

Earlier I dealt with the iPad light painting to create floating 3D text but this technique has very finite possibilities, however I got a good idea from it.

I began to develop my own technique to photograph non-existent things. I created a non existing “man” with 3D design softwares who later served as photo model. Lines and segments of this “man” are displayed on a 30-inch monitor, then I “painted” the man with it. 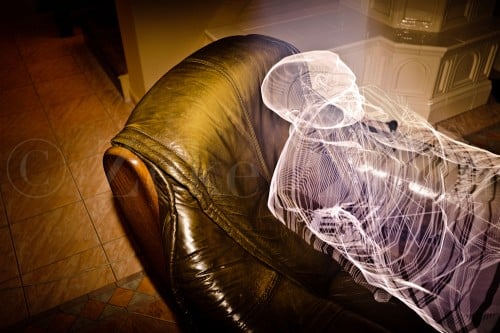 The first step is to create a virtual 3D object that will be used later to photograph. For this I used 3D Studio Max and Cinema 4D. I used 3DS Max because that’s what I used to work with but you can use any kind of modelling software of your choice. You can download a 30 day trial of 3DS Max from Autodesk or there is a lot of free ones as well.

I’m not going in to the modelling because there are thousands of tutorials for each modelling software. There is links for tutorials at the end of the article for every step of the process but you can also google for some and there are really nice ones on 3dtotal.

That said, modelling is not an easy thing, if you new to it you need to do some tutorials and practice for 2-3 weeks before you can do some basic models. I don’t want to take away your interest but I studied this for five years. But the good news is there are tons of downloadable models on the net, lots of them are paid but you can find nice ones for free if you search for them. 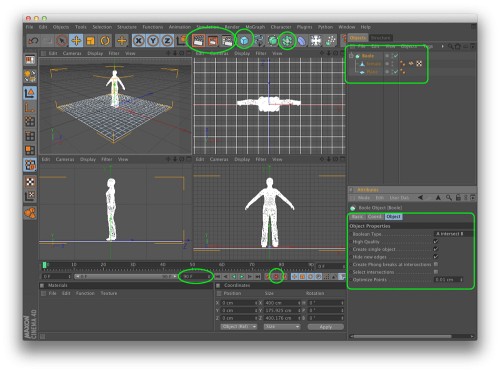 If you did your model or downloaded one, the next step is to create a video that later can be used for the lightpainting. This can be done with a method called Boolean.

If you have two objects (in this case one object is your model and the other object is a plane passing through it) boolean can calculate the intersection of the two. It’s a feature that can be found in almost every modelling software but some of them can’t handle complex objects too well and in this case the quality of the lightpainted object greatly depends on the quality of the Boolean algorithm used.

For this step I’m using Cinema 4D, I found it has the best built in Boolean. It also has some other features that are very useful for this project, so it was an easy choice. Just google for “C4D Tutorial” for basic instructions, I’m not going into it because there are tons of tutorials for this too. If you are using other software the workflow will naturally be a different, but the same principles apply.

Of course you can also use C4D for modelling but if you did your model in another software you need to export it in .obj format or if you download one, search for .obj, .3ds or .c4d files. Then you need to import it to C4D, just drag and drop the file in to the main window and it appears in the 3D space.

Next, you need to create a plane object. There is a small blue box in the upper menu, click and hold then select the plane from the appearing menu and then the plane appears in the space. You need to move the plane to the bottom of your object.

At the bottom there is a time line and on the right side of it there is a number. This number is the length of the movie, if its too short you don’t have time for lightpaint if it’s too long it’s going to blur the model on the photo, so it varies for every object because you need more time for larger lightpaintings and shorter video for smaller ones, you need to find what works best for your model.

The number at the slider indicates the count of the frames and one second is thirty frames. For the life sized man I used 150 frames which is 5 seconds.

Now if you move the time slider the plane moves up and down. At the right side of the blue box icon there is a green gear like thing, if you go in there is the “Boole”. It appears in the right upper section along with your model and the plane. Drag the plane and the model on to the “Boole” then in the lower right section set the boolean type to “A intersect B”, switch on the first three setting and switch off the remaining two.

Now you if you move the time slider you only see a thin section of your model at a time. Once you ready with this it’s time for rendering. In the upper menu there are three clappers, select the right one for the render settings. 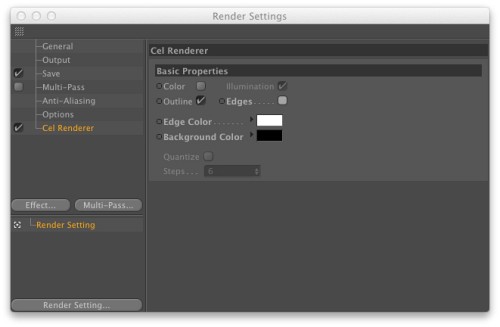 From the “Effect” menu select “Cel Renderer” then set it like on the screenshot.

Then at the “Output” menu set the resolution and at the “Frame Range” select “All Frames” then In “Save” there is the “Format” option, select some video format what you like. (I’m using Quicktime movie on my Mac)

One you are done, close the options click and hold on the middle clapper and select “Render to picture viewer”. It’s going to render out your final video that are you going to use for the lightpaint. If you have a more complex object, rendering can take hours (depending on your computer). If you done with this your video should look something like this. 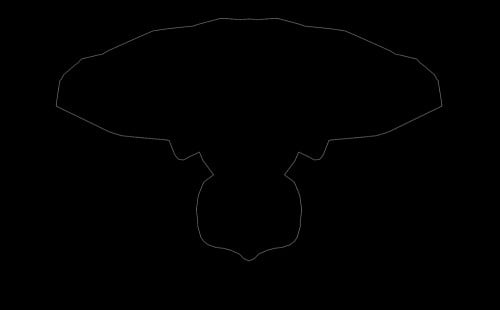 Now comes the fun part! In the final step you need to play your video on some sort of screen, basically any kind of screen can be used, monitor, iPad, phone, notebook etc. Basically, all the regular rules of light painting apply, but here is a short break down.

Set the camera on a tripod.

For exposure I’m using the length of video plus five seconds.

You also need a flash. Set it to rear curtain sync mode, that way if you are doing the painting in total dark, you won’t be in the picture at the end of exposure when the flash lights up the scene.

Once everything is set, press the shutter button and start painting! You need to move the screen in upward direction since the video was created from bottom to top.

If you want to create something nice with this technique you need to do a lot of images, try different setups, different camera setting and different videos.

For me one image is took about 30-50 tries to get it right. Its a bit frustrating at the begining but I think its worth it!

How to get the $156 Adobe Black Friday discount, even for existing subscribers