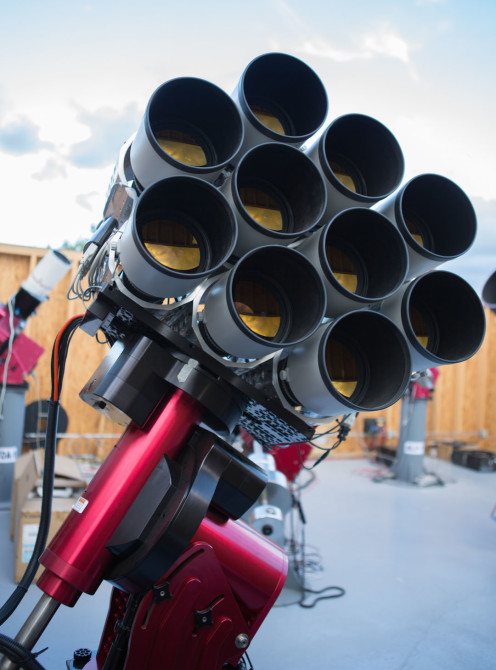 While telescopes do a great job gathering light and obtaining images of ridiculously distant objects, even the largest and most advanced units are assumed to be unable to detect certain faint structures due scattered light which may be hiding them.

The “unprecedented nano-fabricated coatings with sub-wavelength structure on optical glasses” found on the lenses is said to play a major role in the array’s success.

The array originally included only three lenses when it was commissioned in 2013, and additional lenses were added along the way due to the improvement in its capability to detect extremely faint and complex structures around galaxies.

There’s no word on future plans, but the wording of the press release suggests that ten might not be the final lens count for this unusual device.

The name, in case it wasn’t obvious, comes from the similarity to a dragonfly’s compound eye.

Capturing images via multiple lenses simultaneously is another one of the reasons the Dragonfly is so effective at removing unwanted light. The design is working so well in fact that the Dragonfly is said to be ten times more effective than its nearest rival.

This beast of a device belongs to the University of Toronto’s Dunlap Institute for Astronomy and Astrophysics, and while it may seem outrageously expensive to photographers, it’s relatively a bargain.

Ten 400mm f/2.8L IS USM II lenses cost approximately $100,000 (not including any discounts or shipping) and ten of the science-grade SBIG STF-8300M CCD cameras attached to the lenses will run another $19,950. Add to that $15,000 for the Paramount ME-II robotic telescope mount and you’ve got an extremely capable telescope for just shy of $135,000.

[via University of Toronto via Astronomy Now, h/t J. Wolf]