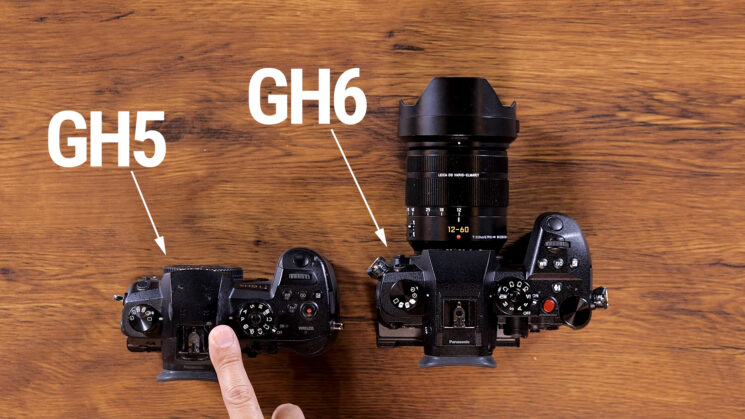 Well, it seems a lot of info about the Panasonic GH6 was leaked overnight – and that Digicame-Info appears to be the new Nokishita. We went from a handful of new specs to the (almost) entire specs sheet being posted online and yesterday’s photos leak has turned into a full video from an Asian YouTuber who jumped the gun a little early, complete with English translation commentary.

From watching the video and reading the specs sheet, it looks like there’s good news and bad. For a start, it’s heavy, weighing in at 823g with battery and SD card and there’s no phase-detection AF. But, it offers ProRes recording internally and the 25-megapixel sensor is capable of seeing up to 300 frames per second.

First, let’s get the video out of the way. I’m not sure who posted the original (I don’t recognise them), but it was reposted and translated with English commentary by AngryRabbit Productions. It contains a lot of information that isn’t actually included in the leaked specs sheet further down this page – which, strangely, doesn’t seem to mention any of the video specs.

The specs sheet does cover a lot of information – 8 pages of it – but it primarily seems aimed at the basic technical specifications as they relate to stills photographers rather than video shooters. It mentions the 25-megapixel Live MOS 4:3 sensor, the 13+ stops of dynamic range (with Dynamic Range Boost mode enabled), the 5,776 x 4,336 pixel resolution, the fact that it shoots Apple ProRes video internally (but not ProRes RAW), the combination flippy out and tilting LCD, the 3.6m-dot OLED EVF, but there’s no mention of the resolutions and frame rates when it comes to video – except with regard to how much 60fps you can shoot on a full battery charge.

Fortunately, m,any of the video specs are mentioned in the video above. The first thing you notice is a significant increase in both size and weight on the GH6 over the Panasonic GH5. We’ve gone from 645g body only on the GH5 to 739g body only with the GH6. Once you add a battery and memory card into the mix, the GH6 goes up to 823g vs the GH5’s 725g. And when it comes to memory cards, the GH6 has a single UHS-II SD card slot along with a CFexpress Type B slot, which it’s going to need for that 800MB/sec footage. 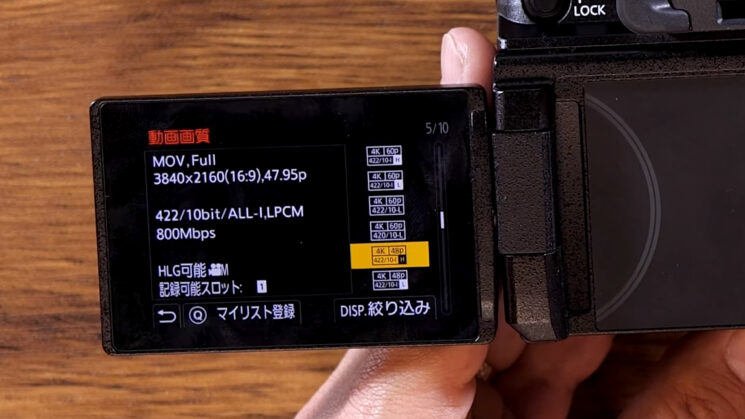 I don’t want to spoil too much more here (you’ll just have to read the spec sheet and watch the video) but there are a few big ones. Firstly, there’s no phase-detect autofocus. This is one that many had hoped for, given the terrible video performance of Panasonic’s Depth From Defocus (DFD) autofocus system in the past – which reverts back to regular contrast-detect AF with Non-Lumix lenses. Various comments around the web do say that the DFD AF has received a 3x speed improvement over previous generations, but whether that’ll be good enough remains to be seen.

Variable Frame Rate recording also seems to have taken a massive leap from the GH5’s 180fps (which was already quite impressive) up to 300fps on the GH6. It also upgrades the 4K frame rate to 120 frames per second. Exactly what the bitrates will be for those is unknown at this time, though, so how bad the compression will look at those high frame rates remains to be seen. The GH5 VFR footage tends to break down quite a bit at 180fps, although it’s still passable depending on your needs. 5.7K resolution tops out at 60fps.

One thing that’s going to be particularly important to some, especially vloggers and those who shoot a lot of handheld footage is the in-body image stabilisation (IBIS). According to the specs, the standard 5-axis sensor-only IBIS and Dual IS 2 where the sensor and lens work together in conjunction with each other, both offer an extremely impressive 7.5 stops of stabilisation. How well this performs in the real world for shooting video also remains to be seen.

Even though the specs have leaked, there are still a lot of unanswered questions, especially when it comes to real-world video performance. Fortunately, we only have four more days to wait until the official announcement and hopefully there will be plenty of reviews confirming how well (or how badly) some of those features do actually work.

« These extreme macro shots will make you appreciate the humble fly in a whole new way
Nightmare material: Flock of birds smashing into the ground caught on camera in Mexico »