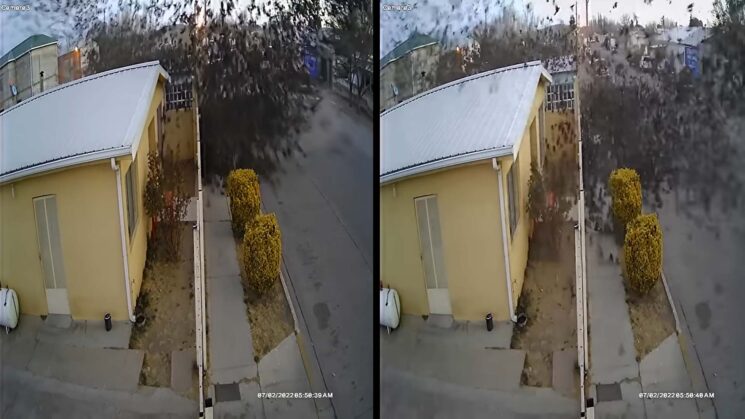 A security camera recently captured an utterly bizarre wildlife incident in Mexico. A flock of birds suddenly smashed into the ground, and it looks like a scene from your worst nightmares.

The incident took place in the city of Cuauhtémoc in the morning of 7 February. According to El Heraldo de Chihuahua, hundreds of yellow-headed blackbirds (Xanthocephalus) slammed into the ground. To me, this footage looks like someone poured them out of a giant bucket. While the majority of birds just went on with their flight, many of them didn’t survive. The witnesses said that it started happening around 5 in the morning, and the police started to get calls about the incident around 8 am.

These blackbirds migrate from northern Canada to northern Mexico, where they spend the winter. A veterinarian examined the birds after they collapsed and concluded that it may have occurred as a result of inhaling toxic smoke. El Heraldo de Chihuahua writes that the area suffers from high levels of air pollution due to the use of wood-burning heaters and agrochemicals, so this may have affected the birds. Other reasons include the birds standing on the power lines, or even the cold temperatures in the area. However, it’s impossible to determine exactly what happened to the birds, this report writes.

PetaPixel notes that a similar incident took place in the UK in 2019. It wasn’t caught on camera though, but people only saw the aftermath when over 200 starlings were discovered dead on a back road. Rob of NWP Rural Crime Team explained back that it’s a “relatively common phenomenon,” caused by cold weather or escaping a predator. I’ve never seen the exact moment of it caught on camera, and it freaks me out.

Final update on the Anglesey starling case, that received widespread publicity and theories

From time to time, security cameras capture some utterly weird stuff – like that “angel” a few years ago. But I think we already have a 2022 winner, and it’s only February. I’m sorry for the poor birds though, but I’m glad I wasn’t in that street when it happened. I already have enough trauma from Hitchcock’s The Birds.

I am documenting a 7,000 kilometers paraflight with a flock of swans – this is my kit

« Complete leaked specs and video of the Panasonic GH6 show 7.5 stops IBIS, 300fps and ProRes video
Skylum’s new software Luminar NEO is now ready for you to use »