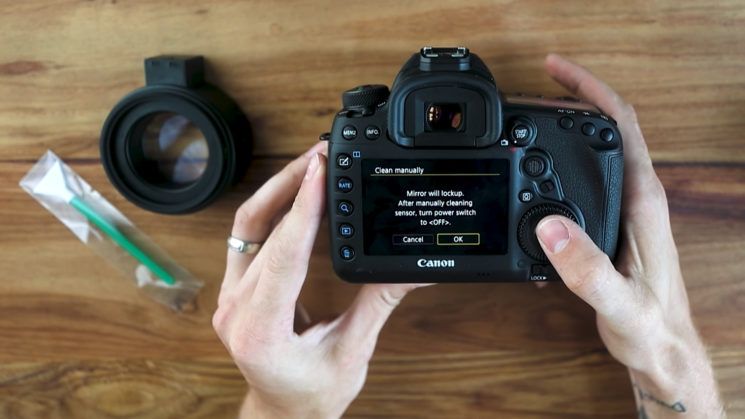 If you listen to the wider DSLR & mirrorless owning community online, cleaning your own sensor is the scariest thing in the world. We’re talking Pennywise, Freddy Krueger, and Jason Voorhees all rolled into one kinds of scary. So, we ship them out or feverishly wait for the next photography show, to take our camera for cleaning.

But, it’s really not all that scary. I’ve been cleaning my own DSLR sensors since 2002. After you do it a couple of times, the worries disappear. In this video, Peter McKinnon talks about his dirty camera issues on his recent trip to Africa. He then walks us through the process to get your sensor clean and sparkly again. He also covers some tips to keep your lenses clean, too.

Working in windy and dusty environments such as those Peter experienced can be hard on your sensor. Even if your gear’s weather sealed, bits are going to find their way in eventually. There’s also tiny particles on the outside of your camera that can fall inside while changing lenses. Even if you change them in a relatively clean environment, they’ll still get in there.

Cleaning and maintaining your gear is pretty easy to do by yourself. But it’s easy to mess up if you follow bad advice. So, let’s have a look at one thing you definitely do not want to do.

DO NOT use canned air

Compressed air is great for blowing dust off your computer keyboard, but the worst thing for camera gear. There’s three main reasons.

A Rocket Blower is a much better alternative to canned air. These do just use the air around you. It comes in one end, and out the other, and you get control over how quickly that air comes back out. There’s no chemicals, no residue, just good clean air.

Peter keeps one of these in his bag everywhere he goes, and so do I. They’re fantastic for lenses as well as sensors. I give the mirror and sensor a quick blast with often when I notice a spot of dust on my images, or after I’ve been shooting in a hostile environment. Just point the camera down, squirt, and put on your lens.

This is the easiest form of regular sensor cleaning that you can do. There’s no issues with having to physically touch the sensor. It’s quick and easy, and you can do it pretty much anywhere.

I start the lens cleaning process with the Rocket Blower, too. This removes any large particles that may be on the front of the lens element. This is something I do when I’m home, but I’ll often do it out in the field, too.

Zeiss make their own lens cleaning solution, but I tend to use a 50/50 Isopropyl alcohol & water mix in an atomiser spray bottle. I use this solution for cleaning all kinds of things. My phones and tablets, computer monitor screens, filters, just about anything, really. Remember, though, you want to spray a squirt or two on the lens cloth, and not on the lens itself. The solution tends to be thinner than pure water, and can seep through some weather sealing. You don’t want it creating a residue inside your lens.

Physically touching your sensor with anything at all is a process that requires some care. This is what scares most people. They’re worried that they’re going to destroy their camera’s sensor, and what should be a 2 minute cleaning job turns into a $500 repair. If you’re careful, though, the worst that can really happen is that you leave smears on your sensor. In which case, you just try again until you get it right.

Sensor cleaning is done with a different solution to that which you use for lenses. I certainly wouldn’t recommend the alcohol/water mix for this one. Personally I use Eclipse Fluid with Sensor Swabs. I’ve been using that since 2002, and it’s served me well so I’ve stuck with it. Peter prefers the VisibleDust Sensor Cleaning Kit and swabs, which are also very good.

Most modern DSLRs will have a lock up feature designed specifically for cleaning your sensor. You’ll want to make sure that your battery is fully charged or that you’re on AC power for this. The last thing you want is that mirror flopping down while you’ve got a stick poking into the sensor.

Peter uses a fantastic tool by VisibleDust called the Quasar. This is a 5x magnifying loupe designed specifically to go over your camera’s sensor. It features super bright red and white LEDs so that you can light up your sensor and easily see just how much dust rests on its surface.

At $99 each, they’re not an obvious purchase. But getting one will help to ensure a good clean every time. And, long term, it will save you far more money by being able to do it yourself than regularly paying other people to clean it for you.

When I learned to clean my own sensors, there was basically only one other option. Send them back to Nikon. They wanted $80 each time, I’d have to pay for shipping, I’d be without my camera for 3 weeks, and I’d heard many reports of them coming back in worse condition than when they were sent out.

Sensors used to get dirtier then than they do now, because DSLRs didn’t feature built in features to reduce dust on the sensor. And there is also a theory that the CCD sensors Nikons used at the time would attract more dust than the CMOS sensors we use today.

It was just practical for me to learn then. Today, it’s easier than ever to have somebody else clean it for you, and it can be done quite quickly, too. But you’ll still save time and money in the long run if you learn to do it yourself.

How to Clean Your Camera Lenses (And Check For Problems)