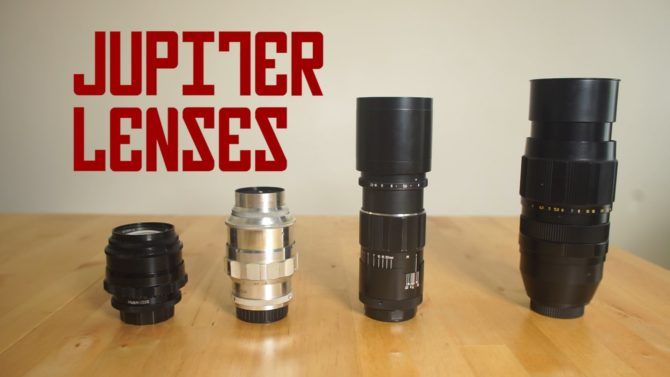 Jupiter was a class of lens made by manufacturers of the former Soviet Union.  There were quite a few different lenses in the Jupiter lineup, and in this set of videos from Mathieu Stern, we’re going to learn about four of them.

A lot of people tend to ignore older lenses, but I picked up a Jupiter-9 85mm f/2 lens last year, and it rapidly became one of my favourite portrait lenses, and it’s fantastic for video.  After seeing these videos, I might have to add a couple more to my list.

First up is the Jupiter-9, 85mm f/2.  This is widely regarded as one of those “legendary” lenses amongst users of older glass, and after getting one myself, I can absolutely see why.

I think it’s a stunning lens, and while they typically seem to sell for around £100-160 on eBay in the UK, you can occasionally find one that slips through the cracks and goes for £20-30.

Next is the 135mm f/4 Jupiter-11A, which is based on the Carl Zeiss “sonnar” pre-war design.  Reviews for this lens over on the Pentax Forums rate it highly for its sharpness, with the only downside being that its “ugly”.

But, if people are put off using this lens because of what people will think of them for using such a hideous lens, then that works for me.  It just keeps demand and prices down.

In stark contrast to the apparently grotesque appearance of the Jupiter-11A, is the beautiful silver version of the Jupiter-11.  Also a 135mm f/4 lens, and of a similar internal design to the Jupiter-11A above, this one seems to be much more appealing to portrait shooters.

This one is definitely going to be going on my list.

The final lens to be reviewed in this set is the hefty Jupiter-21M 200mm f/4, a somewhat sizeable beast.

Update: Mathiue has now posted the video for the Jupiter 21M (I think “M” in this case means Monster) 200mm f/4 lens.

Aside from the obvious sharpness that older lenses still have, I find they offer some very unique and special qualities when used for video.  Qualities and a character that modern lenses simply don’t have.  Modern glass is often too clean and perfect.

With the apertures in these lenses also being disconnected from control by the camera itself, it also makes them fantastic for timelapse as the aperture blades never move between shots, eliminating flicker entirely.

If you haven’t done so already, make sure you head on over and subscribe to Mathieu’s YouTube channel where he talks about some other excellent older lenses, offers advice on how to pick up great deals, and occasionally tackles the Weird Lens Challenge.

Do you use M42 or other older lenses?  Which are your favourites?  Let us know in the comments.

Lomography unveils the Jupiter 3+ ‘Art’ Lens, an update on a Soviet classic