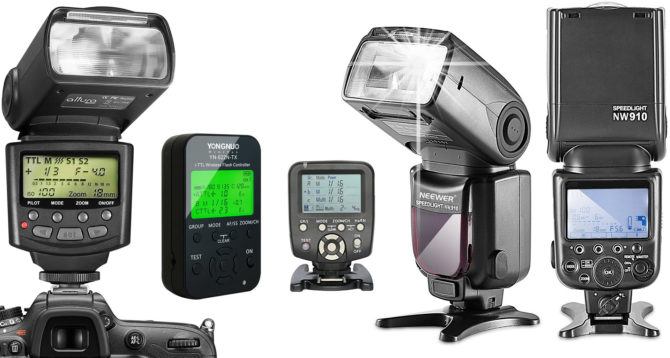 Venturing into the world of flash, and radio triggers can be a confusing, sometimes frightening and potentially expensive prospect for those who are very new to it.  So, where do you start?

Photographer and YouTuber Tim Oxton aims to help you figure this out in this video comparing some low budget flashes and triggers to see how they measure up, and we also offer some suggestions of our own.

The two flashes highlighted in the video, the Altura Photo Professional Flash Kit and the Neewer NW910 iTTL are both relatively inexpensive, at least when you compare them to their Nikon and Canon equivalents, but there are many other options out there to fit various budgets, offering varying levels of capability.

For the absolute beginner, there’s one question you have to ask yourself that will rapidly help determine your equipment choices.

Do you want a system that offers as much automation as possible that you can ease into over time, or do you want to jump right in at the deep end from day one and really learn this stuff?

Diving straight in at the deep end

If you want to jump right in, make it a bit challenging, and force yourself to learn some very valuable lessons very quickly, then I believe that full manual flashes are the way to go, and the prices have gotten so low now on some models that it’s an extremely inexpensive route to take.

If you’re starting off with just a single flash unit, with the plan of adding more at a later date, then one flash unit that immediately spring to mind is the Yongnuo YN560-IV.  This is about as bare bones as a speedlight gets while still offering a lot of power and versatility at a very low cost.

It contains a built in radio receiver, removing strain between the light stand and the foot of your flash, that supports the very inexpensive Yongnuo RF-602 transmitter mentioned in the video above, as well as the more recent but still pretty cheap RF-603 transceiver triggers.

This flash also supports the Yongnuo YN560-TX commander, which allows you to get full remote control over the power of your flashes right from the hotshoe on top of your camera.  The YN560-IV also has commander capabilities built in, but the YN560-TX costs about half that of buying another flash unit just to act as a commander.

Having this ability built into each flash unit, however, does mean that if your YN560-TX fails on you in the middle of a shoot, then in an emergency you can use one of your YN560-IV speedlights to control other other flash units.

I’ve used a wide range of flashes over the years, but no matter what I may have with me during a shoot, I always have a bag containing four YN560-III flashes (the predecessor to the YN560-IV mentioned above), and a YN560-TX, because even if they’re ultimately not my main sources of light, they can be handy on location alongside more powerful flash units just to throw a little light in dark corners of my scene.

Easing yourself into it

If you want to make your life a little easier, and have some procrastination options while you’re figure this whole flash thing out, then manual flashes might not be the best option.  This is where TTL steps in.  TTL stands for “Through The Lens”.

In short, it’s a way for your camera and flash to communicate with each other in order to determine what it things is the optimum brightness level of each of your flash units.  In the real world, TTL isn’t perfect, and it may ultimately present you with more problems than it solves, depending on how you wish to use it.

But, it can also be a handy time saver for certain situations.  One popular flash unit which offers TTL to help provide automated flash exposure, is the Yongnuo YN-568EX II. 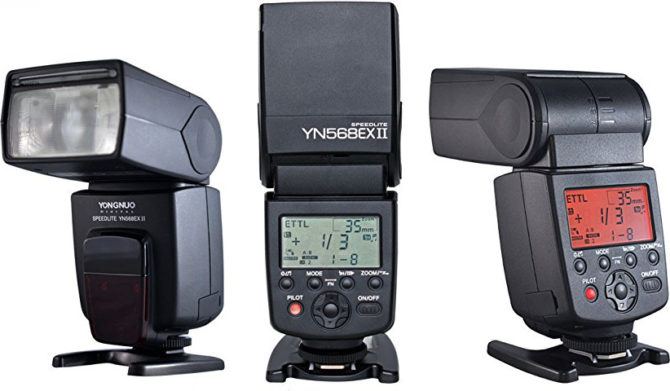 This flash unit offers virtually the same features as the six-times-the-price Nikon SB-910 flash unit, and Canon equivalent, and compatible with both of their remote control capabilities, these flashes are pretty much straight up drop-in replacements for the more expensive options.

They also offer you High Speed Sync capabilities, allowing you to bypass the normal 1/160th-1/250th shutter speed limitation of conventional flash, which means you can shoot with wide apertures out in bright sunlight at 1/4000th of a second and still use flash to fill in the shadows.

The only real drawback to the YN-568EX II is that the built in trigger system is optical.  This is the same issue that many Nikon shooters have complained about with Nikon’s own AWL/CLS flash system for a number of years.

While it’s mostly very reliable, especially in the dimly lit world of the studio, on super bright sunny conditions, there are times it won’t see the flash of the commander firing on your hotshoe, and if you want to put one inside a softbox or around a corner, you may never get it to see the signal to fire. 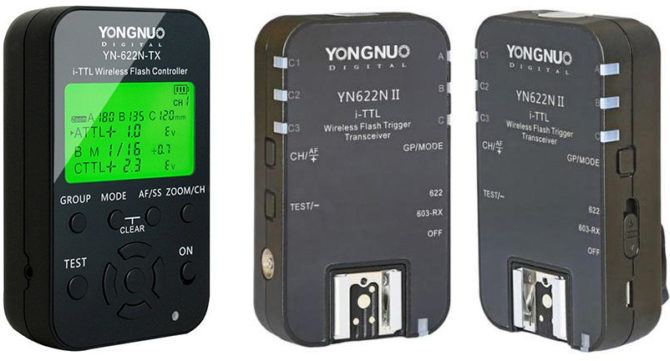 To combat this problem, we once again have to turn to radio triggers, which defeat line of sight issues and the brightness of the sun without issue.  One of the most reliable options I’ve tried are the Yongnuo YN622 triggers.  They’re pretty inexpensive, and they offer a lot of reliability over an optical triggering system.

Another option, which is very similarly priced, however offers much more potential for future expension are the new Godox X1 triggers.  As well as Nikon, there are versions available for Canon, and even Sony, representing one of only a small handful of 3rd party flash triggers available to Sony shooters that offers both TTL and High Speed Sync while also making it compatible with Nikon and Canon’s flash systems.

Godox also offer a range of flashes from speedlights to 600Ws studio strobes now, with built in X1 receiver capabilities in both manual and TTL flavours, at extremely competitive prices.

Not all of their flash units are quite as inexpensive as their Yongnuo, Neewer or other brand counterparts, but some of them have only just been recently released, so they have that “shiny new” price tag that other brand units a couple of years old have since lost.

That being said, even if you go with Yongnuo speedlights now, using Godox triggers can mean that you’re able to start buying into the system now, and you can expand into other and more powerful Godox units in the future.

Yes, it can be confusing if you’ve never dealt with flash before, but before you buy anything, you need to figure out what it is that you want to do with it, and what you might want to do with it in the future.  With this information, you’ll be better armed to make flash buying choices.

Even if the answers to these question don’t magically tell you what you need, and these aren’t all the questions you should be asking yourself, it will often tell you what flashes you can discount from your list, either based on your budget, the features they offer, or the lack of potential future expansion, should you wish to grow your system without having to replace everything.

Whichever you want to go for, don’t rush into it.  Do your research, read reviews, ask questions of people that already own them, and make sure they’re going to be able to handle whatever you want to throw at them before you put down your cash.  They may be the inexpensive options, but they’re still not free.

« Do photography degrees create career-ready photographers
What is the best camera for street photography? »