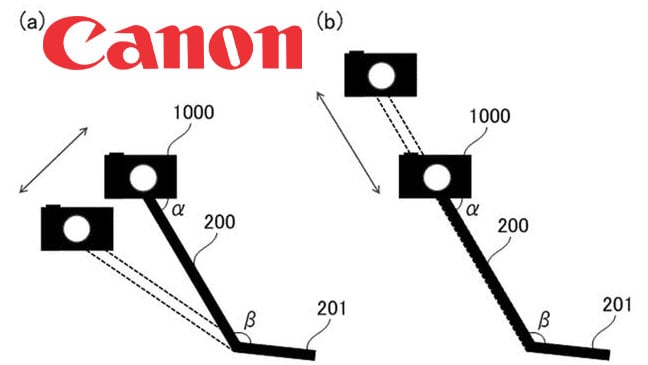 Canon has filed yet another interesting patent: a gadget of the past and the future at the same time. Yes, it’s a selfie stick – but on the next level.

While the selfie stick is so 2014, Canon’s new patent adds an interesting twist to the gadget I thought we all forgot. It comes with a built-in camera and it automatically controls the focal length, as well as the length and angle of the stick itself.

Digicame reported on Canon’s new patent, describing it as “an imaging device capable of adjusting the composition in real-time when taking a selfie.” From the sketches, it appears that the stick comes with the camera. However, I’m guessing that it might be connected to your phone when it’s attached to the stick as well. I couldn’t quite catch that, but both versions are possible.

The selfie stick is capable of recognizing the subject and automatically extend, retract, and adjust the angle. According to Digicame, you can choose whether you want the composition to be fully automatic or you want to be able to control it yourself.

The concept reminded me of Canon’s 470EX-AI speedlight with a motion control head. While I don’t really find that one useful, this selfie stick might actually come in handy. If it gets produced, I see it as a helpful tool for vlogging. However, I hope I won’t have to have another trip to Athens or Venice and duck every five seconds as some oblivious selfie takers whip out their selfie sticks.