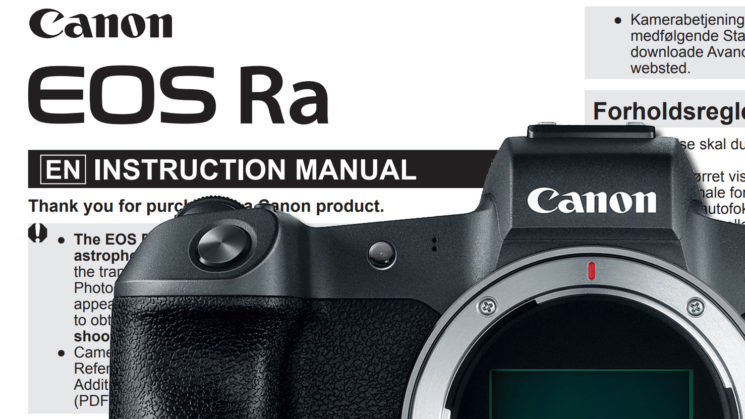 Astrophotography-specific versions of cameras aren’t all that uncommon for camera companies to announce. Nikon’s done it in the past with the D810a and a few others, and so has Canon with the EOS 20Da in 2005 and the EOS 60Da in 2010. Now, Canon is looking to update, with an Astrophotography version of the EOS R mirrorless camera, according to a leaked manual.

Canon Rumors reports that a source told them that the “Canon EOS Ra” has appeared on an internal roadmap for 2020. The “a” term is typically destined for Canon’s astrophotography bodies. But Canon themselves have also let the news slip, essentially confirming that it’s coming, by having an EOS Ra instruction leaflet available for download. 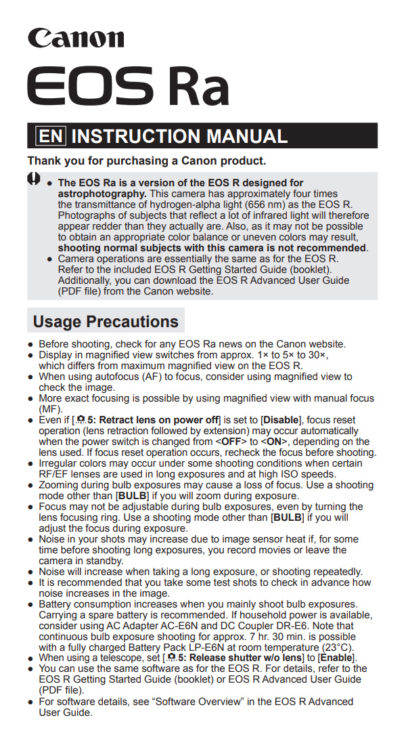 Although labelled “Instruction Manual” it’s very basic, and doesn’t really offer any clues about the camera other than the fact that it’s designed for shooting astrophotography.

The EOS Ra is a version of the EOS R designed for astrophotography. This camera has approximately four times the transmittance of hydrogen-alpha light (656 nm) as the EOS R. Photographs of subjects that reflect a lot of infrared light will therefore appear redder than they actually are. Also, as it may not be possible to obtain an appropriate color balance or uneven colors may result, shooting normal subjects with this camera is not recommended.

Other than that, the operation of the camera is essentially the same as the EOS R, the flyer says.

There’s been no official announcement from Canon yet, so there’s obviously no word on a price or actual release date. We’ll keep you posted as we find out more.