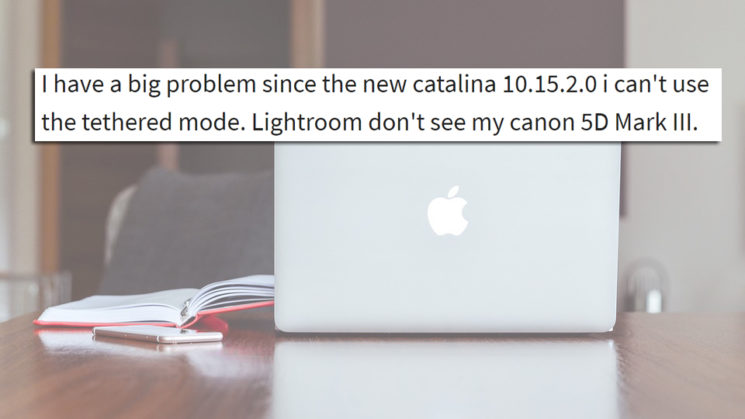 Photographer Krystofz Levet complained that the latest version of macOS Catalina doesn’t support tethered mode. On the MacBook Pro 16, Lightroom doesn’t see his Canon 5D Mark III. Other users added that the same problem occurs in other apps too, such as EOS Utility and Capture One. Some claim that Apple is to blame for the hiccup, while others blame Adobe.

However, the problem with Capture One was reportedly fixed, while it remains in Adobe Lightroom. So it could be that Adobe is the one that should work on it. And indeed, judging from the response Markus Hofstaetter got from Adobe, they’re working on fixing the issue:

Hi Markus, we're sorry to hear you've been affected by this issue. Our engineering team is aware of this issue and working diligently to resolve it. Follow this thread for more details: https://t.co/uKlfCJEgTL ^CM

Hofstaetter believes that the problem is actually on Canon’s end, as he told PetaPixel. But that’s just an assumption and we can’t really know what’s going on or how long this will last.

What’s more, tethered shooting doesn’t work with Nikon cameras either, according to Adobe. When the camera is turned on after invoking the Start Tether Capture command, Adobe Lightroom won’t see it in MacOS Catalina 10.15.2. But there’s a workaround if you’re a Nikon shooter: turn your camera on first. Then, select File > Tethered Capture > Start Tether Capture and you should be good to go.

Latest Lightroom Update Takes Away Multiple Card Import, This is How You Bring It Back