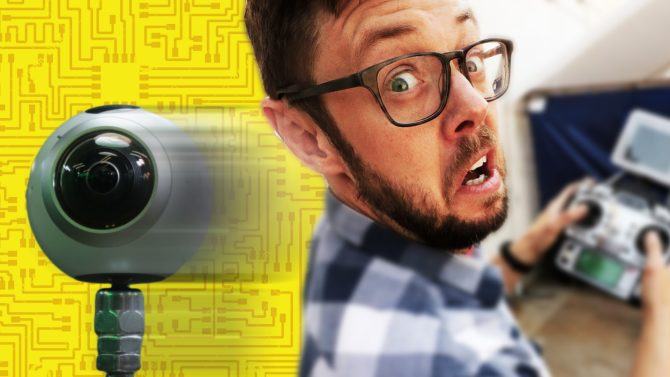 If there was ever any doubt that Indy Mogul were back in full force, this should help to belay those fears.  In the latest episode of their new Erik Builds the Movies series, Erik Beck builds a remote controlled dolly for a 360 camera out of an old motorised wheelchair.

Why might you want one of these? Well, other than just being a cool toy, they’re pretty much the only way you can get the camera operator out of your shot if you want your camera to move while recording. Remember, 360 degree cameras look behind themselves, too!

The total cost of the build for Erik was around $245, but he was able to salvage many of the required components from other projects.  If you were looking to build up yourself and wanted to acquire everything from scratch, the cost is estimated to be closer to $600.

$600 isn’t pocket change, but, it’s still a hell of a lot cheaper than the $18,000 commercial alternatives, and I would bet that most of these parts can be salvaged either from other projects, scrapyards or charity shops.

One component that you definitely don’t want to skimp on, however, is the motor driver.  Erik uses the Sabertooth Dual 32A Motor Driver for his dolly, but you’ll want to double check the specs on your motors to make sure it can drive them.

About the only change I’d make to this would be to use a Xiaomi Yi HD camera (or the 4K version coming out in a week or so) instead of the baby monitor.

Depending on how you orient the 360º camera, the extra footage recorded by this might help to cover up some of the stitching in front of the dolly with a bit of post work.  You could also mount a pair of them for some frontal 3D action.

It’s definitely not a super simple quick DIY project, and will take some research and planning to get the right components for you, but the final result looks well worth it; both in terms of how the thing looks, as well as the footage produced by the camera mounted to it.

It might seem a bit overkill for such a small 360º camera, but a rig like this can hold a lot of weight (as proven by Erik driving himself around the shop).  With the amount of torque on those motors, I bet you could hook a trailer up to it and make a great remote control rig for carting your equipment around on location, too.

Those big wheels could also get over some fairly difficult terrain on location, and there’d be nothing to stop you mounting a regular 2D camera attached to a gimbal, either.  The weight of the battery and motors at the bottom would help to keep the centre of gravity very low, no matter what camera you put on it.

How do you hide yourself when shooting with a 360º? Do you even try? Have you thought about building something like this yourself? Let us know in the comments.

How to build your own DIY track dolly for under $50