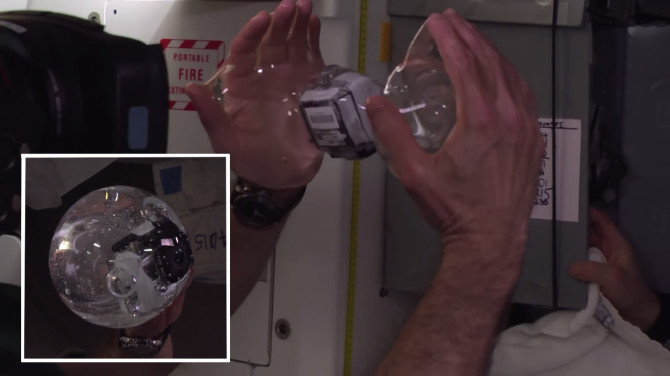 This is proof that astronauts are just the best. The team aboard the International Space Station decided to kill some time by releasing a large ball of water into the spacecraft and sticking a GoPro inside it. Because they are in space, the surface tension of the water caused it to take on a spherical shape, allowing enough room for the action camera to fit inside as it floated around in the cabin. There’s also some really cool footage of the astronauts attempting to handle the sphere. Their reaction to the experience is almost as fun to watch as the GoPro water ball itself.

As further proof that astraunts rule, NASA even filmed the entire thing in 3D for our ultimate viewing pleasure (so long as you have the appropriate 3D eyewear to make it work). But, even if you don’t have 3D glasses, the 2D version is pretty rad, too. Take a look at the awesome footage, below. It certainly puts a whole new perspective on underwater photography.

Thank you NASA, Steve Swanson, Reid Wiseman, and Alexander Gerst for bringing us this video, you totally made our day.