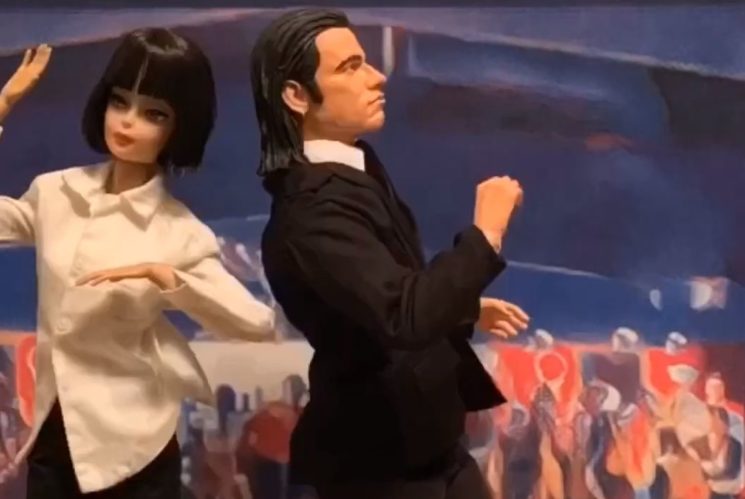 I’ve said this a hundred times, but I simply love stop-motion videos. And if they can make me smile, I love them even more. Artist and animator Warren Wright has created a series of such videos, and they’ve made my day today. He uses Barbie dolls and stop-motion animation to recreate iconic movie scenes and music videos. Step aside, Madonna, Barbie’s taking over!

As you might have guessed from the previous sentence, Warren has recreated Madonna’s video. More precisely, he made a stop-motion of her 1990 MTV Awards performance of Vogue. And yes, this one is probably my favorite.

Another one of my favorites recreates the iconic dancing scene from Pulp Fiction. I love that movie, that quirky dance, and I totally love how Warren translated it into a stop-motion video. “Honestly I do these because they make me laugh,” Warren writes in the description of this video.

“Once I came across this @johntravolta Vincent Vega doll with such a great likeness to him I couldn’t help but want to do something stop-motion related. This American Girl Barbie reproduction doll served as a perfect @umathurman ‘s Mia Wallace. I mean a Barbie holding a cigarette? How great is that?!”

For the recreation of Billy Joel’s Uptown Girl music video, he mixes things up a bit. He combines Barbie, a Super Mario doll, and “a guy that has seen the musical ‘On the Town’ one too many times.” Yes, that guy would be Warren.

Although he started the project shortly before the pandemic, the quarantine has proven to be very productive for Warren. Sadly, he had to sign up for unemployment since he’d been furloughed. Still, he says that he’s happy to be able to make projects like this. “With stores being closed I made some of the pieces and had to improvise some,” he writes in the description for his “dollmation” of The Rich Man’s Frug. “All of the heads except two are vintage,” he adds.

After this Barbie Fosse reached over 57k views on Facebook, Warren’s friends encouraged him to share some videos about himself and his process. So, he has also published a few videos where he shares a bunch of BTS photos and talks a bit about his process.

“George Michael + 90’s Super Models + vintage barbies + quarantine + unemployment = Freedom,” Warren writes in the description of this video. And I think that “Freedom” refers to more than just the name of the famous song. Warren is doing what he enjoys and what brings a smile to his face, and there are no many things that say “freedom” more than this. Although times must be tough for him due to unemployment, it’s awesome to see how well he’s used his time and that he made the best out of the tough situation. I always find things like that really inspiring.