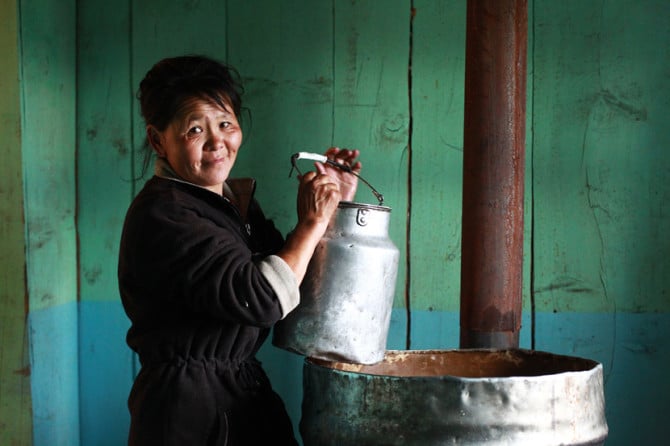 I would like to bring up an issue of principle which is connected to photographing people and portraits. One that each photographer has a different opinion and personal way about doing: Do I, as a documentary photographer, need to approach and ask the permission of my subject of photography to take their photograph, or do I “steal” the desired image without them knowing about me doing so?

The biggest advantage when we take a photo without our subject knowing about it is – Authenticity. When a person doesn’t know he’s being photographed, he acts naturally, doesn’t react upon us as photographers and doesn’t feel the need to impress. He acts exactly how he would if we didn’t notice him at all. In this article, I use the verb “steal” for a reason.

When we “steal” a shot, we are in an unpleasant situation. If we take a photo without our subject’s knowledge, it restricts us from moving freely and makes it difficult to change lenses from fear that we will be noticed. What if the person notices us, what do we do then? Approach him? Quickly leave the place and by doing so let the photo we wanted go? For those who look for total authenticity, there is no better method than this. It does, however, have disadvantages – even risks – that we have to take into our consideration.

I always ask people for permission to take their photograph, and I don’t think I’m really losing anything by doing so. Next time when you ask someone to be photographed and you get their approval, try this: instead of taking one or two pictures and leave, ask to stay near them for a while and take some photos. In the beginning the people you photograph will not act normally and will react on your presence as photographers. For them, their daily routine is hampered.
Perhaps they love the attention and the “ego boost” from the fact someone wants to have their picture taken. Or maybe they’ll be trying to figure out what’s so special about them that you approached them. Either way, you’ll find yourself stumbling into a block that hides that magical something you wanted in your photo in the first place.
Many photographers will find themselves despaired in this step, they will leave the situation and miss the amazing thing that usually happens about 3-4 minutes afterwards. After you take a few photos, your subject calms down, those who were embarrassed understand that it’s not that bad, and those who were excited from the camera get that satisfaction from the attention and calm down as well. From that moment forth, and during the time you choose to stay around them, they will pay less attention to you and the camera, they will go back to their daily routine and you will get an amazing thing out of them – intimacy. Your subjects will receive your presence and allow you to actuate freely around them. You can change lenses as many times as your heart desires, you can try different angles and you can move around in order to catch them in the best possible light.  The achievement of intimacy while working with people and especially in portrait photography is the key for a good photograph. An image that catches the eye and pulls the viewer deeper inside it.

For me, the story about Bata illustrates the advantage of approaching and asking for permission. I met her in a small village named Tsagaan Nuur which is located near the Russian border in northern Mongolia. Bata was responsible for the public showers of the village and she opened it for me and a group of tourists that came with me. Due to my unending luck  I was the last one in line for the shower, and that fact gave me and Bata some quality time together. I pulled out the camera from my bag and asked “photo?” to which she nodded with approval, and I shot the first image. 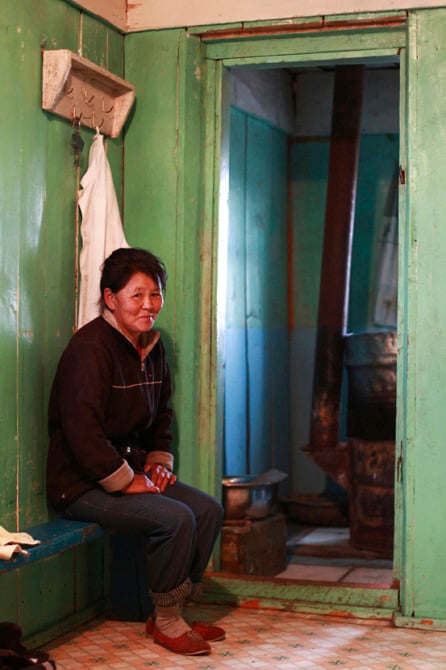 From that picture I have learned two important things: the first, that I have great lighting in that shower-house, as the window from the left side of the picture lights Bata and the shower room and the extra window in another room gives me a great back-lighting.

The second thing, and the most important one, was Bata – she didn’t feel comfortable in that situation of being photographed. Although I did not put my camera back into my bag, I did slow down – I started photographing Bata from afar and in slower pace in order to make her think that I am busier with my camera than with her.

The second image I took in the other room. Bata’s work was simple: Bata filled a small jar with water, came up with it to the floor above the showers and spilled the water into containers that streamed the warm water to different sections. 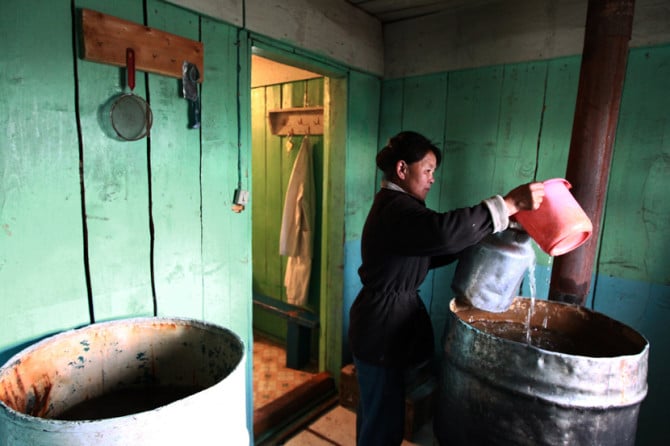 In this picture you can see Bata filling the small jar with water, next to her two big pots, the wooden walls of the chalet, the filter and the knife on the wall. In the shower room just beside it there was a sling and a hanging towel. All the ingredients of the story assembled but there was something missing. I felt like I had too many details in the picture and I’m losing the main point of the story – Bata herself. I changed to a narrower lens (50mm) and shot another photograph. 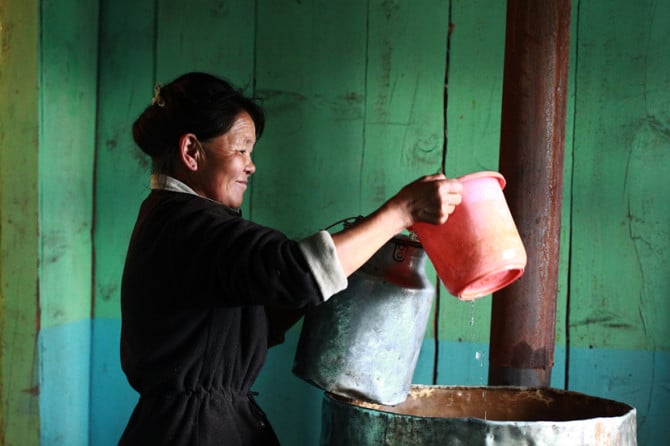 That’s more like it: I have Bata, the filling action, the wooden wall serves as a simple and pleasant background, and the light penetrating through the chalet window illuminates Bata’s face. Still, I felt that there was something missing. Bata was still not feeling comfortable with me shooting her. She hadn’t opened up to me yet. From that moment I understood that I had found the frame and composition I had been looking for, and now all I had to achieve was intimacy in order to make this image more interesting. I sat there for a while. Bata was moving about quickly, trying not to look at me or the camera, filling the water in the jar, and going up to the second floor to pour the water into the different shower sections. This action repeated itself again and again, and every time Bata passed by me to fill the small jar with water I took a few pictures without moving too much – trying to get Bata more used to me. After a while it happened: I got that look that I so wanted , but was afraid to ask for.

When her look told me “You’re still here?”, I felt like I found my intimacy with Bata, a personal moment between us. If I didn’t ask for her permission to take her picture, that look could have been probably less comfortable and nice. The fact that I asked her permission to photograph her, allowed me to search for that moment, to choose comfortably the accurate angle that I wanted, to change the lens without being afraid that It will ruin the shoot and the most important thing: to let Bata open up to me and create a picture with intimacy which is in my opinion, and I hope you all agree with me, is the most interesting picture out of all the other pictures of Bata.

Don’t let the fear of being answered “No” prevent you from achieving a better photograph. You might not know it, but most of the people will agree to have their picture taken or even will agree to it just because it doesn’t bother them. Most of them will be glad to help you, you just need to ask. Even if you don’t know the language you can still find a way. Remember that creating a connection and intimacy with people is the main key for a quality photograph and of pulling a great portrait. Try, dare – you won’t regret it!

Asher Svidensky is a freelance photographer specialising in art photography with a strong passion for documentary and storytelling. His work has been published in magazines and newspapers around the world including the BBC, National geographic (USA), The Times Newspaper (UK) and many more. See more of Asher’s work on his website, and follow his travels on Facebook and Twitter. This article was originally published here and shared with permission.

Art bots will steal your photos on Twitter and put them on a T-shirt. Here’s how to troll them